By Brian Warner on July 2, 2019 in Articles › Celebrity Homes

Back in 2011, the real estate world was stunned when a British socialite, who no one had ever heard of, paid an eye-popping $85 million for Candy Spelling's Holmby Hills mansion. Making this even more of a head scratcher was the fact that this unknown heiress, Petra Ecclestone, was just 23 years old at the time of the purchase. According to reports, she bought the house in all-cash with no mortgage at all. It almost seemed like fake news or a prank, but it was real. Well, Petra is having the last laugh because she just sold the house for $120 million.

Spelling Manor sits on a 4.7 acre lot that once held Bing Crosby's home. In 1991 the late producer Aaron Spelling (the man behind hits like 90210, Melrose Place and Charlie's Angles) built what would later be known as "Spelling Manor, "Candyland," then more recently, "The Manor in Holmby Hills." The final result is a 50,000+ square foot home that features 123 rooms including 14 bedrooms and 27 bathrooms.

It is the largest home in Los Angeles and one of the largest single-family homes in the world. It is 1,500 square feet larger than the White House. The house has more than an acre of living space. That's the same as roughly a professional football field area of living space, alone. 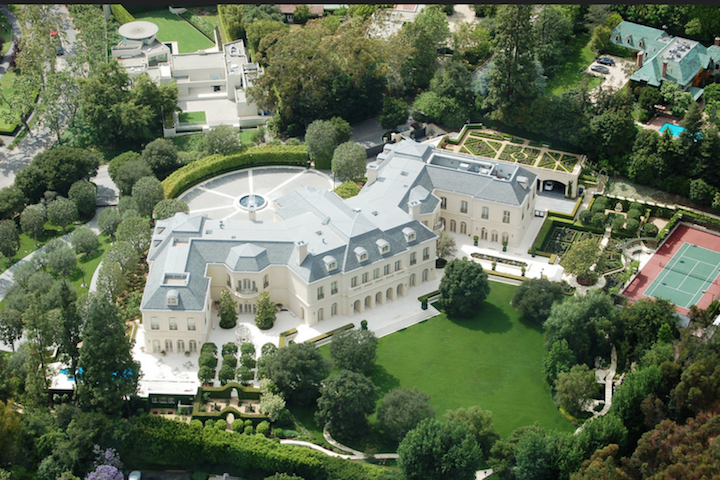 At $120 million, it is now the highest price paid for a home in LA history, topping the $110 million Peter Morton paid for a beachfront home in Malibu in April 2018. It is the fourth home in LA history to sell for more than $100 million, a list that also includes the Playboy Mansion which is just down the street on Holmby Hills' ultra-exclusive South Mapleton Drive. Petra initially listed the home for sale in 2014 for $150 million. After not getting any offers, she inexplicably UPPED the price to $200 million in 2016. When it was re-listed in 2019 the price was $160 million. The buyer has not been revealed.

Whoever bought the house will be looking at an annual property tax bill of $1.44 million. That means he or she will have to earn around $3 million per year before taxes just to cover Uncle Sam.

So, who is Petra Ecclestone and how was she able to pay $85 million for a house when she was just 23? Petra is the daughter of former Croatian super model Slavia Ecclestone and billionaire Formula One honcho Bernie Ecclestone. Bernie's net worth today is $3.1 billion and that's AFTER he paid Slavia a $1.2 billion divorce settlement in 2009.

A year after buying Spelling Manor, Petra spent $90 million on a home in London. She was married to a businessman named James Stunt from 2011 to 2017. They had three children together. Just last month, James filed for bankruptcy in London after reportedly collecting more than $6 million in immediate debts.

One final brilliant point that a commenter named Derrick just made on Facebook: Petra spent $85m in 2011. Her property taxes have been $1m per year ($2m before taxes), roughly $9 million in the time that she owned the house. She also spent millions remodeling the property. Some reports say as much as $20 million, but let's say it was "only" $10 million. When you combine taxes and remodeling costs with general maintenance, staff, water bills, furniture etc… it's very likely that Petra dumped at least $30 million into the house. That brings her all-in costs to date to $115 million. She sold the house for $120 million. So a $5 million return.