Patrick Soon-Shiong's House: As you would expect, the richest person in Los Angeles needs to own an absolutely fantastic home. Actually, in Patrick's case, he decided to own five fantastic homes and turn them all into one incredible mega-property right in the heart of one of the wealthiest zip codes in America, Brentwood. assembling this mega-property began back in 2006 when a lawyer representing an anonymous client spent $4.9 million to purchase a ranch house from the estate of the late screenwriter Ernest Lehman ("North by Northwest). Within a year, this same lawyer arranged the sale of the house next door. Then another. And another. And another. Each house was sold for well over market rates to this lawyer. In total, seven parcels were acquired for $30 million to complete the Soon-Shiong dream property.

When connected, these seven parcels created one three acre property. That's roughly the size of three football fields in the middle of one of the most expensive zip codes in America. Soon-Shiong and his wife proceeded to demolish every single house they had purchased so they could start entirely from scratch. Over the last four years, construction crews worked full time to build a property that would make any billionaire blush. Not many details are known and no photos of the interior have ever been permitted. What is known is that the property features an 18,000 square foot single-family home. While that may not raise too many eyebrows, the basement of this house is 3,300 square feet and reportedly goes four stories underground. One basement floor has a full sized professional basketball court. Another basement floor features a full sized movie theater. We don't know what the other two stories contain. I'm gonna guess sex dungeon and… shooting range. Oh wait, he's a family man. Ok I'm gonna guess petting zoo and exotic car garage. I wish we had more photos and details. We'll obviously update this article if more come in. For now we'll have to make do with satellite photos from Bing and Google maps. 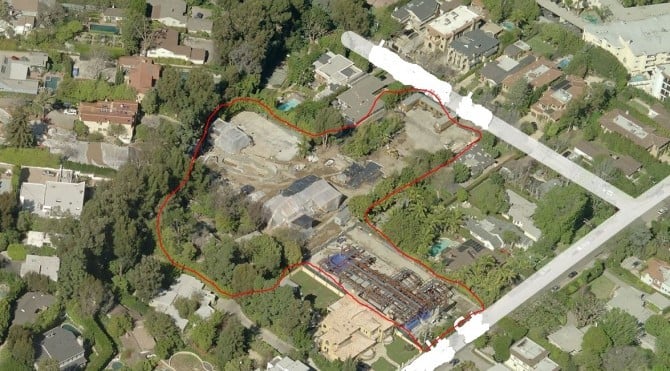 With a personal net worth of $10 billion, Patrick Soon-Shiong is the richest person in Los Angeles and the richest doctor in the world. The son of immigrant Chinese parents who escaped to South Africa during World War II, Patrick graduated from high school at 16 and med school at 23. By the time he was 30 years old he had performed the very first successful pancreatic transplant on the West Coast of the United States and was a full-time faculty member at the UCLA Medical school. Even though at this point he had a resume and career that any reasonable person be more than satisfied with, Patrick wanted to achieve even more. In 1991 he founded his first bio tech company called Abraxis BioScience. The company soon developed a highly profitable breast cancer drug called Abraxane. By 2009, Abraxane was generating $315 million in revenue per year. In 2010 Abraxis BioScience, which was still solely owned by Patrick Soon-Shiong, was acquired by American biotech company Celgene for $3 billion in stock. Over the next three years, Celgene's share price soared nearly 200%.

And that's just his SECOND most successful company so far. In 1997, Patrick founded a company called American Pharmaceutical Partners (APP). APP's goal was to manufacture generic intravenous medicines. By 2008, APP was generating $750 million per year in revenue, of which roughly $300 million was pure profit. In July of 2008, a German-based company called Fresnius SE agreed to acquire APP for $5.6 billion. At the time of the transaction, Patrick Soon-Shiong owned 80% of APP's shares which put an additional $4.6 billion into his bank before taxes.