By Brian Warner on December 6, 2019 in Articles › Celebrity Homes

"Papa John" Schnatter has been experiencing a major public relations backlash for the last few years. It all started back in 2012 when he publicly came out against the Affordable Care Act. Schnatter caused an uproar after announcing that he was forced to raise the price of pizza by 14 cents because President Obama was re-elected. At the time Schnatter believed ObamaCare would have cost his pizza franchise owners an extra $8 million per year. In reaction to the 2012 controversy, hundreds of websites and thousands of people across the nation called for a Papa Johns boycott. Certainly people were upset that he was passing these costs on to customers while also sporting a $500 million net worth. Not trying to take political sides with this article, I just don't think anyone would have noticed the 14 cent price increase, so he should have kept quiet and continued making cheesy pizza and super cheesy commercials.

Schnatter's controversies escalated in 2017 when he blamed Papa John's' lagging revenue on the NFL kneeling controversy. Unfortunately the NFL controversies caused the company's sales and stock price to slide. By the time he stepped down in July 2018, Papa John's stock had slid down to $50 a share. After being removed from the company, shares rocketed up more than 10%, only to fall right back down.

Everything came to a head in August 2018 when it was revealed that he used the "n-word" during a conference call with a PR firm. That final controversy forced Schnatter to step down as Chairman of the company that made him famous. Between August 2018 and November 2019, John sold off his entire stake in the company which at one point included 30% of the stock's outstanding shares. That 30% stake had a paper value of $1 billion for a very brief period in January 2017 when the share price topped $84.

John's wife Annette filed for divorce in December 2019, after 32 years of marriage. The filing came just a week after John appeared in a bizarre local news interview looking sweaty and angry. In the interview he famously muttered that he had eaten 40 pizzas in 30 days. John and Annette actually separated in April 2019. They have two adult children.

In addition to the Kentucky home we describe below, Schnatter and Annette also own property in Florida and Utah. In Florida they own a $6 million condo in the beachside town of Naples. In Utah they own a $23 million luxury condo at a Deer Valley Ski resort.

His Kentucky property (described below) sits on 15-acres in the town of Anchorage. It's worth $11 million. Enough to be one of the most-expensive homes in the state.

When Papa John Schnatter hosted a fundraiser for Mitt Romney at his house in Kentucky several years back, the Republican candidate began his remarks by saying:

"Who would've imagined pizza could build this? This is really something. Don't you love this country? What a home this is, what grounds these are, the pool, the golf course…. This is a real tribute to America, to entrepreneurship."

If your house impresses Mitt Romney, the ultimate one percenter, you know it must be pretty awesome.

To start, John Schnatter's 20,000 square foot castle is located in a wealthy country club suburb of Louisville, Kentucky. The property is spread out over a 16 acre estate and as Romney mentioned, features several swimming pools, a private lake and a golf course. The guest house alone is 6000 square feet! In total his whole property is likely worth north of $20 million in the right market. According to the Kentucky tax assessor, it's worth at least $11 million right now. 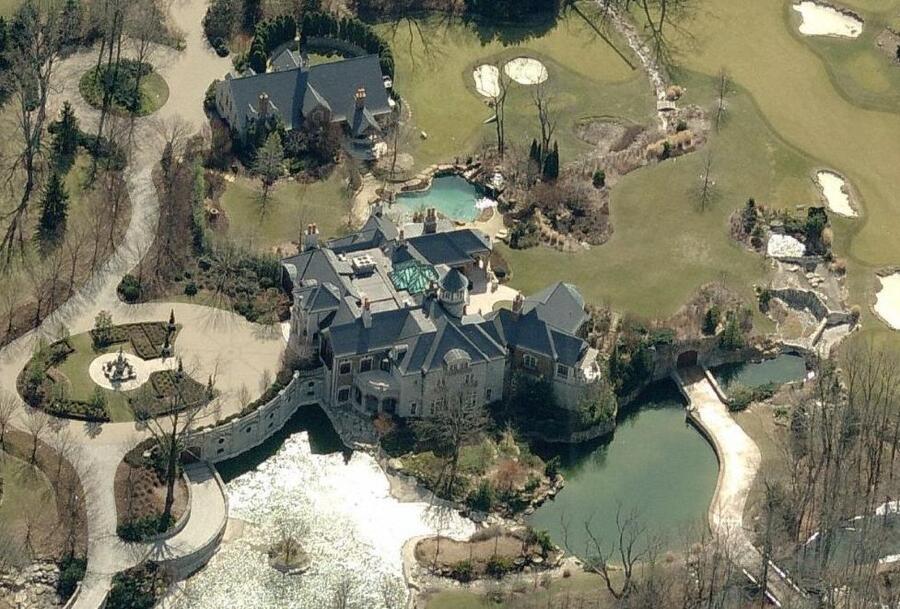 John Schnatter's House From Above

On July 13, 2018, the University of Louisville announced it was removing Papa John's from its stadium name and taking John Schnatter's name off the business school. John also stepped down from the school's Board of Trustees. Since Schnatter PERSONALLY owned the stadium naming rights (as opposed to the company), he had to agree to allow the school to remove his name. It was supposed to remain named after him until 2040.