By Brian Warner on October 21, 2018 in Articles › Celebrity Homes

If you grew up in the San Francisco Bay Area like I did, you would run across the name "Fleishhacker" from time to time. When you visit the zoo, you see the name everywhere. In fact, I just learned that until 1940, the zoo was actually called the Fleishhacker Zoo. Next to the zoo, I remember seeing the crumbling remnants of the Fleishhacker pool, at one time the largest outdoor saltwater pool in the world (it was closed in 1971). The local public television station KQED was founded by the Fleishhacker foundation. Clearly the Fleishhacker family made A TON of money at some point and decided to give a lot of it away.

Mortimer Fleishhacker wasn't the original source of his family wealth, but was extremely successful on his own back in the early 1900s. Mortimer started a bank and built power companies, but time might be about to reveal his wisest investment was actually real estate. Mortimer's 74-acre estate in Northern California, which has been in the family for over 100 years, was just put up for sale. The stunning property is located in one of America's most expensive zip codes and has the chance to absolutely obliterate all real estate sales records.

Mark Twain famously stated "The coldest winter I ever saw was the summer I spent in San Francisco." He's not wrong. Summers in SF can be freezing. As such, for the last 100 years, wealthy San Franciscans like Mr. Fleishhacker have sought weekend refuge from the cold in the outlying suburbs. Places like Marin County and Napa to the north and Atherton and Woodside to the south.

Mortimer Fleishhacker bought his first parcel of land in Woodside in 1907. At the time, Woodside was a sleepy farm town full of fruit orchards. Decades later it would be the heart of Silicon Valley and one of the most expensive zip codes in America.

Between 1907 and 1911 Mort bought 9 parcels of land covering 74 acres. He named his estate "Green Gables". He built a large main home and eventually seven more homes would pop up on the property for various branches of the Fleishhacker family.

Green Gables has three pools. The largest of the three is fairly enormous and unique. You can see that pool at the 30 second mark in the above video.

Here's a satellite image of part of the property from Google: 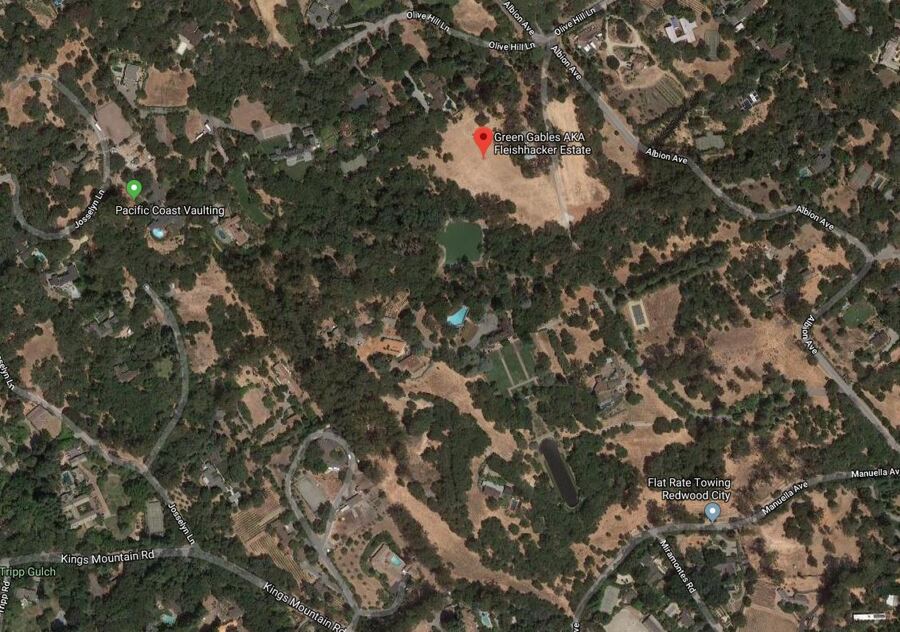 So how much is it going to cost you to buy Green Gables? Believe it or not, the property is so large and unique that real estate agents are not even giving it a price tag.

The current record for most expensive home ever sold in California is $117.5 million. That's how much Japanese billionaire Masayoshi Son paid for a 9-acre estate back in 2012. The location of that 9-acre $117.5 million estate? Woodside, California. You could drive from Masayoshi's house to Green Gables in about 6 minutes: 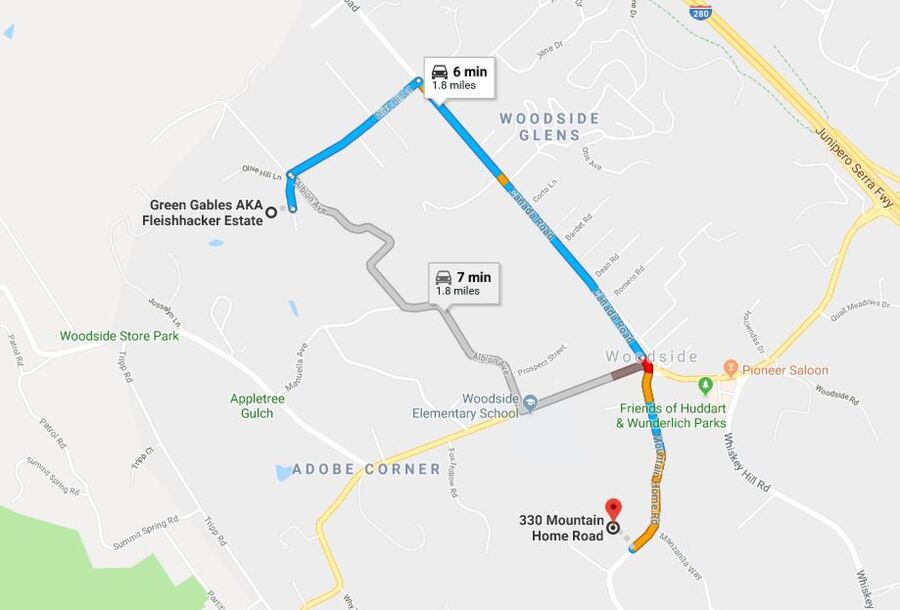 Let's say we're being overly liberal with our comparisons (comps), and instead  pretend real estate market in Woodside has cooled somewhat since 2012 (it hasn't). If we're being extremely conservative, this property is worth over $500 million. Can the market bear such a price? How many human beings on the planet can afford such a price?

FYI, the current record for most expensive home ever sold in the United States is $147 million. That record belongs to hedge fund manager Barry Rosenstein who paid $147m for a stunning property in East Hampton, Long Island.

Ready to have your mind really blown?

In the 1970s, voters in California passed a special law called Prop 13 that was meant specifically to protect families properties like Green Gables. Prop 13 allows people to inherit family properties without having to pay capital gains tax and without having the home re-assessed for future annual property taxes. Imagine someone bought a home in Beverly Hills in 1950 for $100,000. And imagine that today the home is worth $10 million. Without Prop 13, if heirs wanted to keep the house they would have to pay taxes on the gain of $9.9 million. That means they would need to come up with around $5 million. Then they would also have their property tax bill re-assessed at $10 million. In this very basic example, instead of paying a few thousand dollars in annual taxes, the family would pay $100,000 per year. This is what happens in pretty much every other state btw. Prop 13 makes it much easier for people to inherit property that has become extremely valuable over time. You can do this over and over across multiple generations.

According to the property tax records I was able to locate, in 2017 Fleishhacker family members paid a total of $26,000 in property taxes in 2017 for Green Gables. In other words, thanks to Prop 13, in the eyes of the California property tax collector, Green Gables is worth $2.6 million 🙂

If someone were to actually buy Green Gables for $500 million, their annual property tax bill would be $5 million. That's a jump from $26,000 to $5,000,000. And that $5 million comes from after-tax income, so the buyer has to essentially set aside $10 million in pre-tax income every year.

So why are the Fleishhacker's selling? Why not just continue paying $26k a year to own the sprawling mega-property that will presumably only continue to grow in value over the next 100 years?

Well, according to Mortimer's great-grandson Marc, ownership is likely to become too complicated for the next generation of Fleishhackers. There are now 18 individuals in-line to officially inherit the property from the previous generation. Many of them no longer live in the Bay Area and presumably have families of their own. Families that enjoy money.

What would you do if you were in the Fleishhacker family? Would you sell?

We'll keep an eye on this property for you and report back if it ever finds a buyer!