By Chris Kelley on December 19, 2016 in Articles › Celebrity Homes

Malcolm in the Middle star Frankie Muniz may no longer relish in the Hollywood spotlight, but he's apparently quite the heavyweight when it comes to Arizona real estate. The former child star just listed his Phoenix Biltmore estate – his second local mansion on the market – for $3.5 million.

Sitting atop more than two acres of land, Muniz's most recent listing is located within the high-demand Biltmore neighborhood of Phoenix. Originally built in 1935, the bungalow-style Missouri Avenue mansion maintains the nickname "il Segreto." This is the second Phoenix-area mansion that Muniz has listed in 2016. It joins his Scottsdale property on the Arizona real estate market, a mansion in the exclusive Estancia neighborhood priced just below $3 million at the beginning of the year.

Described in its listing as "one of the most incredible properties in the Biltmore area," the fresh-to-the-market mansion features a rich marriage of both original and restored 1930s detailing. With 5,300 square feet of living space, the single-level bungalow boasts four bedrooms (including a split master suite) and five bathrooms, with outdoor amenities such as a bocce ball court, pool and prayer garden to boot.

The il Segreto certainly doesn't disappoint in style. The mansion's spacious family room is adorned with floor-to-ceiling windows and exposed wood-beamed ceilings,. It pushes into the nearby living and lounging room, a shining example of the original style of the 1935 bungalow with its standout fireplace, hand-finished walls, and original own crystal chandelier. On the parallel end is the home's farmhouse-style kitchen, complete with modern stainless steel appliances contrasted with a rustic center island.

Don't let the fact that there's no second story fool you – this Biltmore bungalow has plenty of space when it comes to rest and relaxation. The home's master retreat features a split-entrace setup, offering up dual baths, a private relaxation room, and a large boutique-style closet. And for guests? Not far down the hall are the mansion's ultra luxurious guest suites. Each of the stylized suites includes private sitting areas, private bathrooms, and spacious layouts complete with views of the home's gardens.

Lush landscaping creates a scenic and peaceful feel in the backyard – the spot where you truly discover the property's bungalow style. Elegantly styled and draped terrace patios meet the property's pristine pool and gardens, which lead further back to a serene prayer garden and nearby bocce ball court.

The first mansion Muniz listed this year, a 6,200-square-foot property tucked away in the posh Estancia golf enclave of Scottsdale, is currently listed on the market with an asking price of $2.795 million. According to listing materials, the five-bedroom, seven-bathroom home offers up "breathtaking views" of the nearby granite summit, Pinnacle Park. In 2014, Muniz sold another Phoenix-area mansion for $2.85 million just months after shedding his L.A. home for $3 million. 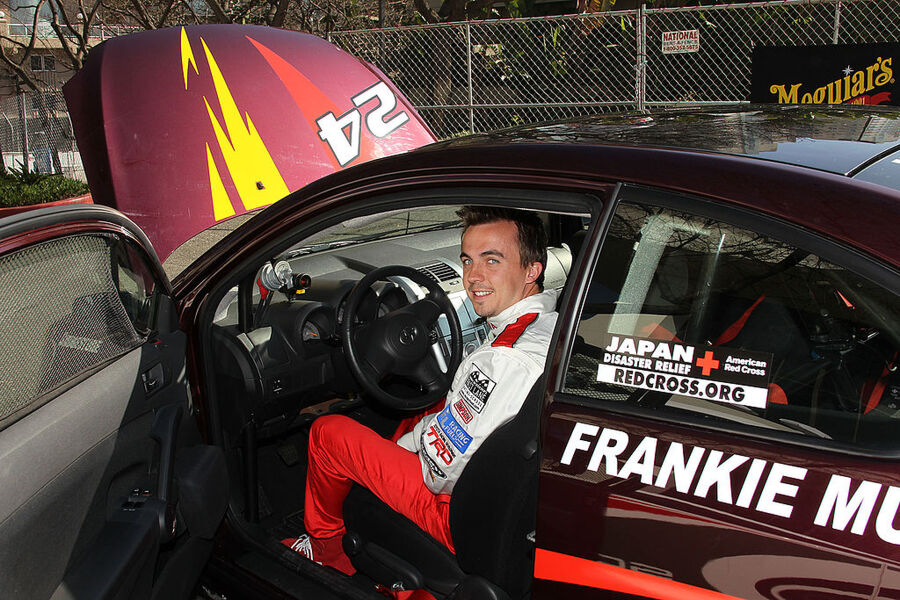 Frankie Muniz is best known for his Emmy Award-winning role in the FOX television sitcom Malcolm in the Middle, but his career stretches far beyond just acting. Muniz, who has a net worth of $40 million, has since hyphenated his occupation with ventures into producing, writing, music, and even racecar driving.