By Chris Kelley on December 22, 2016 in Articles › Celebrity Homes

La Belvedere, the Los Angeles mansion crafted by real estate developer Mohamed Hadid, is fresh on the market. The asking price? A cool $85 million. The La Belvedere mansion, which was famously featured on Real Housewives of Beverly Hills, was originally developed by Mohamed Hadid – ex-husband of show star Yolanda Hadid Foster and father of models Bella and Gigi Hadi – before he sold it to its current international owners for $50 million in 2010. Despite handing off the property, Hadid continues to reside in the luxury residence with his partner, Shiva Safari. According to the Wall Street Journal, the home's most recent owners never moved in.

The stunning La Belvedere has stolen the spotlight on more than one occasion on Real Housewives of Beverly Hills, often as the setting of a party thrown by the Hadid daughters. Nestled atop 2.2 acres of property, the luxurious mansion spans 40,000 square feet and comes packed with 10 bedrooms, 14 bathrooms, and 3 full stories of luxurious entertaining, relaxation, and dining halls. Some of the most standout elements of the $85 million catch include a ballroom that can seat 200 people, a winery with adjoining dining room, an opera-style screening/theater room, a Turkish hammam decorated with mosaic tiling, a private elevator, and 14 fireplaces.

One of the most stunning features of the posh mansion is this high-fashion entertainment den, one of many large and luxurious amenities included within the L.A. mega mansion. The elaborate in-home theater not only comes drenched in sharp, old opera-style fixtures of gold, lined columns, and rich royal red detailing; it also includes a hand-painted mural of the heavens directly above the room's projector.

With ten bedrooms spaced throughout the three lavish stories of La Belvedere, the most fabulous of threads can be found in the mansion's master suite. Like many of the home's private chambers, it boasts its own private bathroom and seating area, as well as access to a secluded, personal balcony that overlooks the grounds. What stands out, however, is the bedroom's rich, creamy walls that are adorned with intricate, gold-plated decorative designs spanning from floor to ceiling. Even the suite's own fireplace is a mural crafted into stone, featuring frolicking angelic children amongst its sharp detailing.

While the home itself may well be worth the costly price tag alone, La Belvedere's private grounds are another rich amenity altogether. The backyard, encased in a pristinely carved fence of green shrubbery and prime landscaping, comes complete with several covered patios and awnings (featuring both an outdoor pizza oven and fireplace), a separate sculpture and fountain garden, and a 70-foot-long infinity pool that overlooks the city. 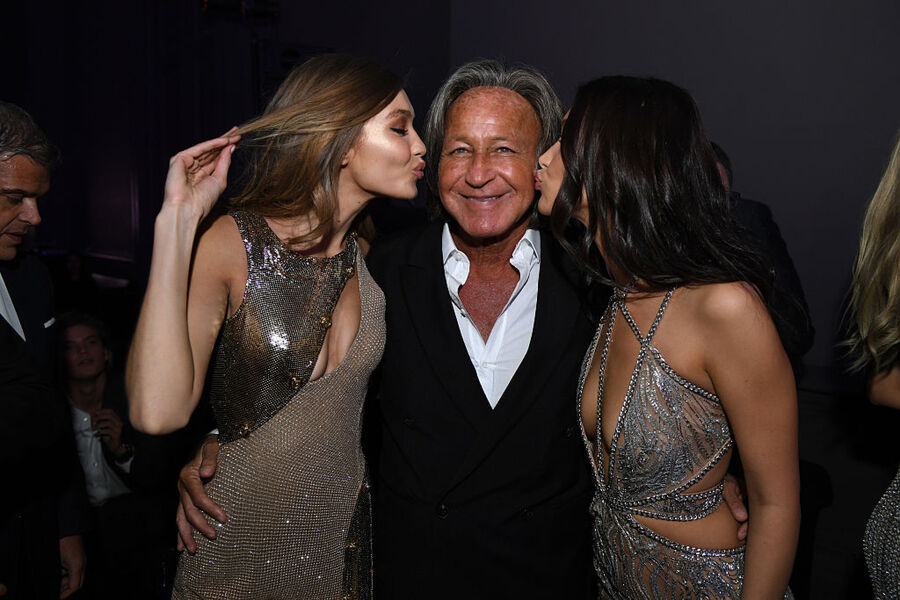 Real estate developer Mohamed Hadid boasts a net worth of $200 million, making him one of the most successful in his industry. Perhaps one of Hadid's most notable projects was designing and developing Ritz Carlton hotels across the world. The Palestine-born businessman is also known for owning The Crescent, a $60 million Beverly Hills mansion. Much of Hadid's fame comes from his failed marriage with Real Housewives of Beverly Hills' star Yolanda Foster. According to court documents, Hadid paid his ex-wife $3.6 million in cash and gave up several mansion and expensive cars as part of their divorce settlement. His two daughters with Yolanda, supermodels Bella and Gigi Hadid, have captured international headlines of their own for their high-profile modeling gigs.