By Simon Gerard on December 21, 2011 in Articles › Celebrity Homes

With the death of "Dear Leader" Kim Jong-Il, it got me wondering what kind of baller crib in North Korea this billionaire dictator hung up his signature furry hat. Of course, not much is known about them, with only a few rare pics, but accounts from North Korean defectors say that he had 20 to over 30 homes. And one waterslide. 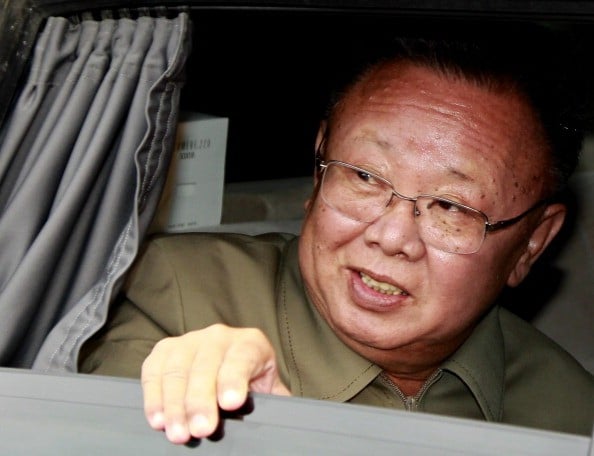 Kim Jong-Il's family retreat is situated north of the capital city of Pyongyang. Found in the green countryside, this compound includes many large homes, landscaped gardens and shared buildings and facilities. The highlight is a huge pool and what could be one or a couple twisty-tube waterslides.

Kim Jong Il's beach house looksmore like a James Bond villain's secret base. Reports say it have multiple floors underground, with glass walls of the ocean and underwater access. This is probably where the Jame Bond villain stuff went down, such as a stealth escape submarine.

Kim Jong Il also has a number "guest houses" outside of the capital Pyongyang. Considering that North Korea doesn't get many visitors, these post-modern looking homes must still be in mint-1980s condition. The lower pic shows lovely fountains, water walkways and gazebos. With absolutely no one chilling and enjoying them. There are also rumored shooting ranges, bowling alleys and a ice or roller skating rink. If anyone can find any hilarious pics of Kim Jong-Il doing any of those activities, please let us know.

The North Korean leader also owns  an ostrich farm. Yes an ostrich farm. This was introduced after a widespread famine in the 1990s. It was part of an official tourist trail according to an old official North Korean publication. Visitors never reported of anyone eating ostrich meat (or riding them). So it's not known if they still raise ostriches or what purpose they serve in North Korea.

Hope you enjoyed this edition of Baller Dictator Cribs.