By Paula Wilson on October 12, 2012 in Articles › Celebrity Homes

Apparently Kiefer Sutherland's lucky number is 24.  He made a solid name for himself as a young movie star in the late 80s and early 90s, with roles in such films as "Stand By Me", "Lost Boys", "Young Guns", "Renegades", "Flatliners", and "A Few Good Men".  Then throughout the 90s, his career sort of, well, meandered.  Projects like "The Three Musketeers", "Freeway", and "Dark City" were moderately successful, but with the exception of "A Time to Kill", which was a hit, the rest of the 90s were a little lackluster in comparison to the steady success of the previous decade.  Then came an offer for a role on television, in a groundbreaking show called, "24".  The rest is history.  "24" finally wrapped up its storyline in 2010, and over the course of its run, Kiefer Sutherland was nominated for six Emmy Awards and six Golden Globes, and won one of each.  He also won two SAG Awards, and multiple Satellite Awards.  In addition, he launched a successful voice over career, and is currently starring on the series, "Touch".  24 really did prove to be a magic number for him.  This trend has seemed to continue with the sale of his house.  He recently put his Greenwich Village townhouse on the market.  24 hours later, it was sold. 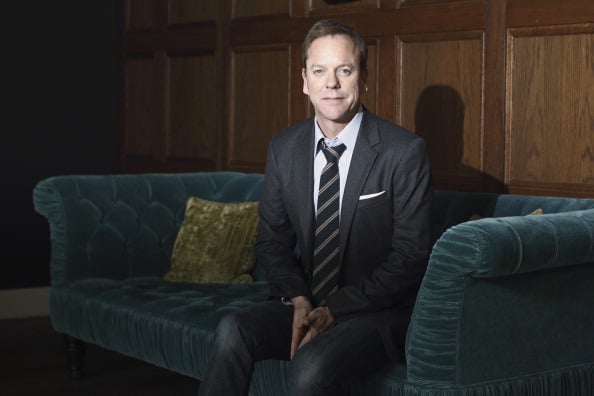 Kiefer Sutherland's house is 4,830 square feet and is spread out across five stories.  He purchased the home in 2008 for $8.2 million, but sold it for the very healthy price of $17.5 million.  The stunning structure has five bedrooms and five and a half bathrooms.  Kiefer Sutherland's house also features a private garden, multiple fireplaces, a sauna, an elevator, and a gorgeous roof deck with its own kitchen and shower.  Steven Gambrel completely renovated Kiefer Sutherland's house the year after he bought it, so the interior feels completely new.  Judging by the amount the new owners were willing to pay for it, and the speed with which they snapped up the property, the combination of Mr. Sutherland's A-list status, and the attractive redesign, made the house hard to resist.