Keeping Up With The Kardashians "Home" Listed For $9 Million

One of the stars of Keeping Up With the Kardashians is for sale with an asking price of nearly $9 million – and no, it's not a family member. The Studio City home used in exterior shots to depict the Kardashian-Jenner home during a past season of the hit reality show has arrived on the real estate market with a big asking price. For $8.995 million, the grounds made "famous" as those belonging to the reality television family can be yours. The deal no doubt comes with the full package (the interiors, too!) – and while the home can't compare to Kris Jenner's real house in Hidden Hills, it does stun with its Italian inspired ambiance and royal accents. In reality, the stand-in house is located over 20 miles away from the reality show's home base, but the buyer lucky enough to scoop up this star of a property likely won't mind.

Some would describe the mansion used as the exterior façade for Kris and Caitlyn Jenner's as a bit over the top, but the Italianate style property has been a bit of a rare gem on the real estate market. While it was briefly listed in 2014 for $6.25 million, the home has largely remained off the market and was last sold in 2005 for $5.225 million. Tucked within Studio City's gated Fryman Estates community, the home is nearly invisible from the street thanks in part to some smooth landscaping and an oversized hedge. KUWTK producers specifically selected this property for its concealed location, a move that ensured the safety and security of both the Kardashian-Jenner family and the current owners of the Studio City stand-in. 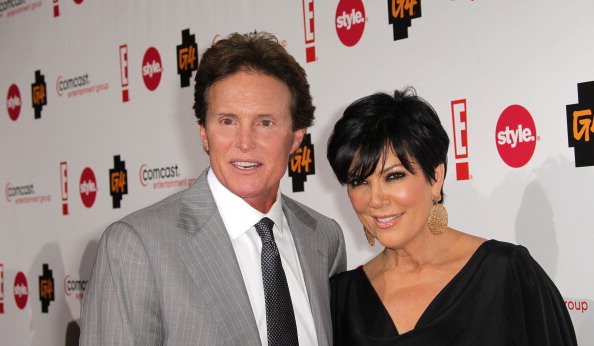 If you were expecting what you saw on television once you entered the home's arched front doors, you'll be in for a quite the surprise. The interiors of both homes look nothing like, but that's more cause for celebration than complaint. With ornate woodwork and hand-plastered Venetian walls at every turn, no single room of the 7,800-square-foot home is understated. The foyer of the home, seen above, boasts towering stone columns, a double chandelier display, and a Cupid statue by artist Giorgio Tuscani. For those of you with a sharp memory, Kris Jenner's real entryway is a bold black and white checkered sitting space with dual staircases and oversized topiaries.

The Kardashians and Jenners have been sensitive to security issues since the height of their reality show's popularity, prompting façade stand-ins for each family member's home. While the home has been tapped by the E! network as the Kardashian-Jenner home base since 2004, reality isn't the only genre that the home has been featured in. You'll also find it in such shows as HBO's Rome and True Blood.

Does the recently announced sale mean the home's days of "stardom" are over? There's no finite answer. However, KUWTK has featured Kris Jenner's real pool and backyard in recent episodes, breaking a continuing trend amongst the star-studded family to use stand-ins to disguise their actual homes.