Just One Year After Birdman Finally Sold His Cursed Miami Mansion For $11 Million, The New Owner Is Flipping It For $34 Million

By Brian Warner on August 30, 2021 in Articles › Celebrity Homes

Palm Island is a man-made island in the middle of Miami's Biscayne Bay. There are 136 luxury homes on the pill-shaped island, 98 of which are oceanfront. There are currently 16 homes listed for sale on Palm Island. The least expensive home for sale today is a $5 million, 3,400 square-foot property located in the center of the island… so it has no ocean views. The most expensive home for sale on Palm Island today is a newly-constructed, 15,000 square foot mansion on the ocean side that is currently listed for just under $50 million.

Today we are going to be talking about the home located at 70 Palm Ave. This mansion, which just recently hit the market for $33.9 million, has a rather amazing history involving two hip-hop entrepreneurs, a bankruptcy, an energy drink billionaire and so much more… 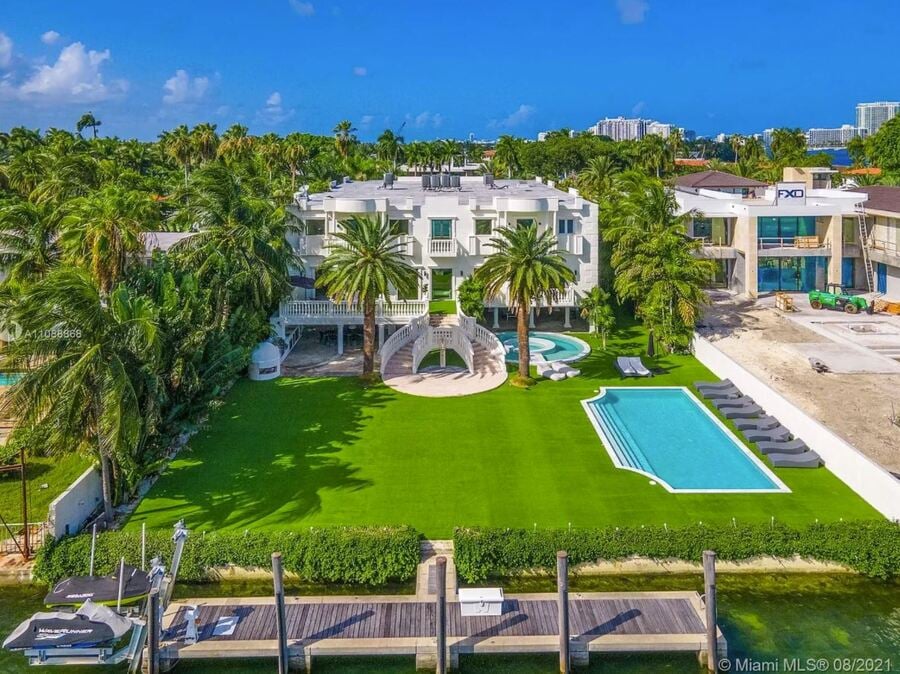 From Scratch to Storch

Whoever constructed this house originally bought the land, and whatever home had been there, in 1999 for $1,135,000. That price worked out to $57 per square foot for the buyer. Spoiler alert, at $33.9 million, the current seller is asking $1,700 a square foot.

The previous structure was demolished and replaced with the 20,000 square foot, 7 bedroom mansion you see in the photo above. Construction was complete in 2004.

Whoever built the house only lived there for about a year before placing it on the market.

In 2006, hip hop producer Scott Storch was at the absolute zenith of his career. For the past few years the beat marker had been churning out smash hit tracks for artists like 50 Cent, Beyonce, Snoop Dogg and Chris Brown. In 2005 alone he produced the following songs:

Storch had the massive career but he needed the massive Miami mansion to complete the picture. So in May 2006 Scott paid $10.5 million for 70 Palm Ave. He parked his recently-purchased $20 million yacht, "Tiffany," out front.

Unfortunately at this point in his life Scott was also reportedly spending an ungodly fortune on his lifestyle. He infamously spent $30 million in one six month period. By his own estimation, Scott was spending $250,000 per month on partying alone during this period.

Scott Storch's party came to an end just a few years later. His yacht was repossessed and a bank foreclosed on 70 Palm Ave.

Weiner barely touched the place. No renovations. No major changes.

Put Some Respect On His Name

Once he was the proud owner of 70 Palm Ave, Birdman proceeded to sink millions into renovations and furnishings. He infamously paid $2 million for a toilet made of gold.

In June of 2017 it was Birdman's turn as the seller. He listed the property for $20 million.

Unfortunately the home languished on and off the market for the next three years, periodically re-appearing with a reduced price.

As first noted by Dirt.com whoever bought 70 Palm Ave from Birdman is looking to score an absolutely unreal flip. After buying the house just 400 days ago for $10.85 million, the current owners just listed the property for $33.9 million.

To be fair, the owners did perform a nearly-full renovation, adding new floors, windows and bathrooms. They also apparently re-converted Birdman's recording studio back into a guesthouse.

You can see their impressive upgrades in this recently-posted property tour courtesy of the listing agent Lourdes Alatriste:

Wherever Birdman moved, I hope he doesn't have great wifi for a few days. I don't think he's going to be too pleased to hear what's going on over at 70 Palm Avenue 🙂