Joe Montana Drops The Price On His Stunning 500+ Acre Napa Castle, Then Drops $7 Million On An Oceanfront Malibu Cottage

By Brian Warner on September 8, 2021 in Articles › Celebrity Homes

Retired football legend/current venture capital investor Joe Montana has made two major real estate moves in recent weeks. First, he cut the price of his 500+ acre estate in the Napa Valley town of Calistoga that has been on and off the market for over a decade. Second, he bought a beachfront cottage in Malibu.

Calistoga is about 45 minutes north of Napa. So it's roughly two hours door-to-door from the former site of Candlestick Park in San Francisco, where Joe played for the 49ers from 1979 to 1992. But Joe never would have made that drive. He and his wife Jennifer bought the 503 acre property you see below in the late 1990s. They then proceeded to spend five years and several million dollars constructing what became a sprawling European-style castle: 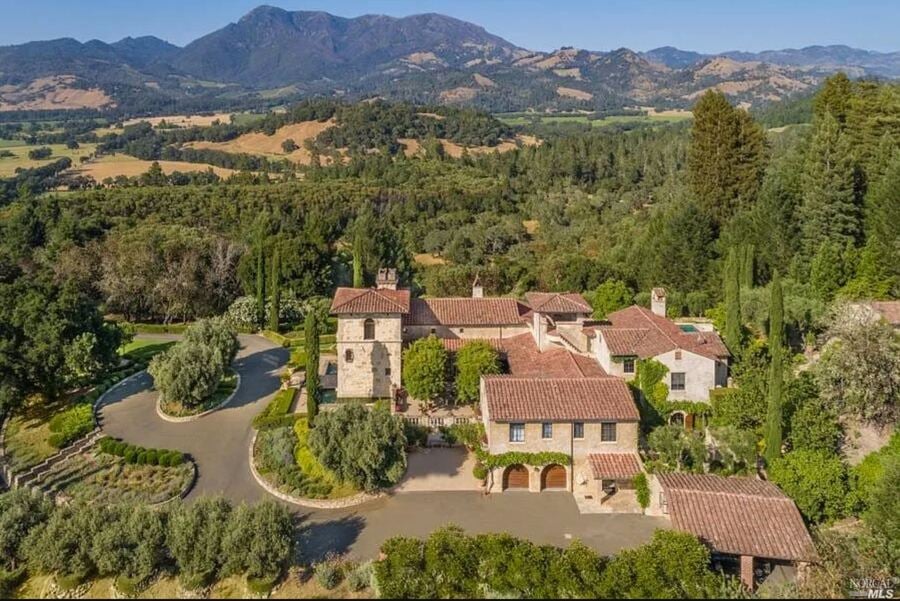 Via the MLS/ Compass

Joe and Jennifer – who met when she was hired to be a background model in one of his Schick razor commercials – did much of the architectural, landscape and interior designing themselves.

They imported, mostly from France, antique marble floors, sinks, mantels, a 17th-century church altar, and iron gates that date to the 1500s.

The main portion of the castle has just under 10,000 square-feet of living space and only three bedrooms. If you need more than three bedrooms, don't worry, there are two 2-bedroom guest houses. There's also a 3,500-bottle wine cellar if you're worried about going thirsty.

If you get bored, head over to the pool. Or take a dip in the pond. Or head to world-class equestrian facility and ride a horse around the property's private trails.

The Montanas initially listed the home for sale in 2009 for $49 million (as in 49ers, get it?). Unfortunately with with the number pun, no buyers could be found. They've listed the home on-and-off over the last decade+. In 2019 the price was lowered to $29 million. A few weeks ago they lowered the price again. This time Villa Montana can be yours for…

And we describe this house as a "castle," we're not kidding. The entrance of the home is surrounded by a moat and bridge. You can see the moat and bridge at the 30 second mark of the video below. Which really is worth your time. This is a stunning property:

As they continue to wait for a buyer for their Calistoga getaway, Joe and Jennifer have downsized from a 500-acre sprawling castle to a 1,400 square-foot beachfront home.

Fun fact #1: I've actually been to a party at Joe and Jennifer's new Malibu home. I used to know the guy who rented the house for a month every summer. It's a nice little cottage, right on the beach, feet from the world-famous Malibu Pier.

Actually, according to the renter, the owner of the house was the son of the actress who played the mom on "Leave it to Beaver." Also known as Barbara Billingsley. From my memory, the renter told me Barbara bought the house in the 1960s for literally like $30,000. For the last decade, the house was rented for $20,000+ per month.

And sure enough, according to property records Joe and Jennifer Montana are buying the house from… Drew Billingsley.

I'm actually sort of surprised Joe and Jennifer are putting roots down in Malibu after the bizarre incident they experienced almost exactly one year ago.

On a Saturday afternoon last September, Joe and Jennifer were watching their 9-month-old grandchild at a different house in Malibu. The baby was sleeping in the living room when a 39-year-old female intruder entered the house, picked up the baby then ran upstairs into a bedroom. Joe and Jennifer confronted the woman asking her to hand their grand baby back. When the woman refused, Jennifer (who is still gorgeous and appears to be extremely fit… check out her photos on Google images) attacked the woman, safely re-securing the baby. Seriously. This happened. T

The woman fled. Joe ran out and flagged down a cop who eventually found and arrested the woman. It's doubtful this was premeditated. As in, from all accounts after the incident the woman had no idea who the Montanas were. She was held in jail for five months and is currently awaiting trial on charges that could carry and 8-year prison sentence.