Hugh Hefner's House: Planning for the Future $5 Million At a Time

Hugh Hefner, the man, is almost as famous as the brand he created.  The Chicago native, who is now almost 90 years old, began his professional career as a writer for Esquire Magazine, and then mortgaged his furniture and took out a loan in order to start his own magazine called, Playboy.  The first issue, which featured nude photos of Marilyn Monroe that were taken nearly five years earlier, was published in 1953.  It sold 50,000 copies, and the Playboy machine was up and running.  Fast-forward to 2013, and Playboy Magazine has grown into Playboy Enterprises, a very, very successful media empire that includes Playboy Magazine, Playboy TV, Playboy Online, three hardcore porn networks – Club Jenna, Spice Digital Networks, and Adult.com, and a licensing arm that controls where, when, and how the Playboy logo and brand are used.  In the 60 years that Playboy has been around, Hugh Hefner has had a very eventful life.  He's been taken to court multiple times.  Two different biographies have been written about him.  He starred in his own reality series for six seasons called, "The Girls Next Door".  He's acted in various dramatic projects, and won a Razzie Award for his efforts.  He produced a successful documentary about Clara Bowen.  Oh, and he's been married three times.  At 87, he shows no signs of slowing down, and after his recent marriage to his third wife, Crystal Harris, he purchased a massive mansion in the Hollywood Hills for her.

Hugh Hefner's house in the Hollywood Hills is 5,900 square feet and contains four bedrooms and five bathrooms.  The multi-level, ultra-modern home also features floor-to-ceiling windows that allow for gorgeous views of the surrounding area, hardwood floors, and high-ceilings.  Outside of Hugh Hefner's house, there are multiple terraces and balconies, and a very landscaped backyard with an infinity pool, jacuzzi, and spa.  Hugh Hefner's house is gated, and has a long driveway.  Mr. Hefner bought the home for $4.995 million.  His reason?  He wanted to leave something for his new, 27-year old wife to own after he passed away.  It seems a little macabre, but he's clearly preparing for the future.  Then again, you kind of get the feeling that's what his new wife is doing, too. 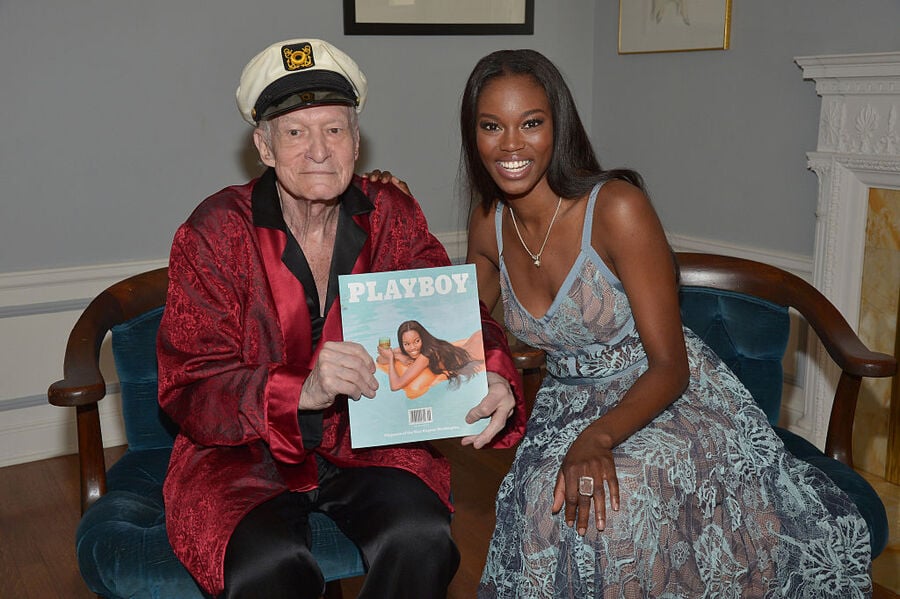 Charley Gallay/Getty Images
Did we make a mistake?
Submit a correction suggestion and help us fix it!
Submit a Correction