How David And Jackie Siegel Made, And Lost, And Made Enough Again To Build The Biggest House In America

You may have heard of David and Jackie Siegel. They're the multi-millionaire couple that has been building a 90,000 square foot mega-mansion in Orlando, Florida called Versailles, after the one in France, of course. Once completed, it will be the largest structure in America used as a single-family home. But it has taken several years to finish the thing, because the Siegel's ran into serious financial trouble during the economic crash in 2008.

Siegel's time-share business is apparently booming again, and the house is back under construction. If you saw the awesome 2012 documentary Queen of Versailles, you know a thing or two about David and Jackie. Here's a rundown of how they made, lost, and made enough again to build a mansion with 11 kitchens, 30 bathrooms, and a 20-car garage. 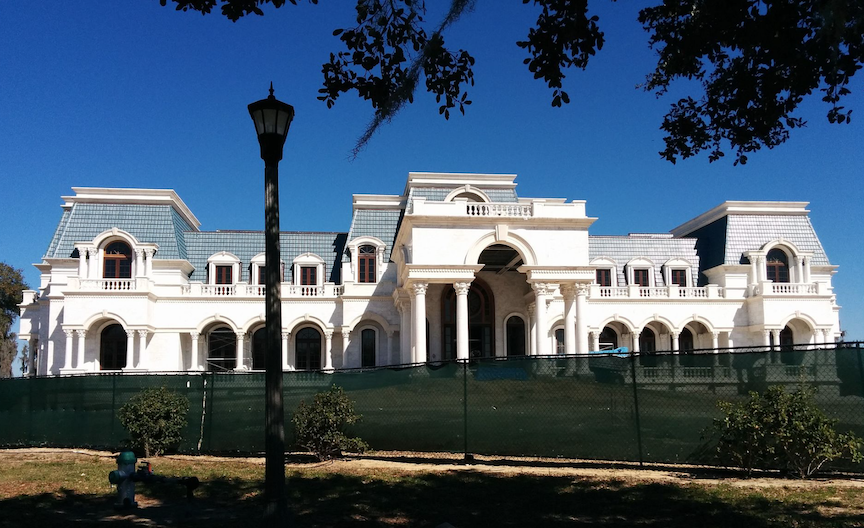 David Siegel was born in 1935 in Chicago. His parents were Sadelle Siegel and grocer Sid Siegel, who moved the family and the grocery business to Miami in 1945. Siegel grew up in Florida and graduated from Miami Senior High School in 1953. He went on to study marketing and management at the University of Miami, but he eventually dropped out.

He opened a TV store in Coconut Grove and sold refurbished TVs. In 1968, Siegel started selling land for a series of companies before investing in his own 1,280-acre plot. He figured out pretty fast that he could maximize the profit on by subdividing it, and the "time share king" was on his way to financial greatness. He bought an 80-acre orange grove, which brought in about $100,000 a year in orange sales alone. Then in 1980, Siegel learned about the concept of timeshares, and two years later formed his company, Westgate Resorts, and opened his first 16 units.

In 2010, when the documentary about the Siegels was shot, their fortune had grown to 28 resorts and gross revenue of approximately $1 billion a year. Siegel had been married before, then he met Jackie in 1998. She has a Bachelor's Degree in Computer Engineering Technology from Rochester Institute of Technology, where she was also inducted into the Knights of Malta, according to her website.

Jackie Siegel was crowned Mrs. Florida, and she eventually ran the competition. One of the competitors threw a party in Orlando and that's where she and David met. If you've seen the film, you know David Siegel is a big fan of beauty queens and pageants, so it makes sense that they met through a competition. Between the two of them, they have eight kids, some from previous marriages, some together, and one adopted niece.

The time-share king and his Queen started building their 90,000 square foot mega-mansion more than a decade ago in Orlando, Florida. It sits on ten acres of lakefront property, and when it's finished, it will feature the following: 11 kitchens, 30 bathrooms, 20-car garage, two-lane bowling alley, indoor roller skating rink, three indoor pools, two outdoor pools, video arcade, ballroom, two-story movie theater modeled off the Paris Opera House, fitness center with 10,000-square-foot spa, yoga studios, 20,000-bottle wine cellar and an exotic fish aquarium, two tennis courts, a baseball diamond, and formal garden. It's not clear why anyone would need so many kitchens, but if the Siegels can afford it, why not?

They had to put the home up for foreclosure after suffering such a huge hit during the 2008 financial collapse. The unfinished home was put on the market in 2010 (for $75 million unfinished or $100 million finished) when the Siegels ran out of money for construction. Things started looking up a few years later, though, and they took it off the market in 2012, and they expect to finish in just over two years. Not only that, Jackie is about to appear on the brand new season of ABC's Celebrity Wife Swap. Here's hoping they film another episode when Versailles is finished so we can all see the finished product.