By Chris Kelley on February 20, 2017 in Articles › Celebrity Homes

The owner of the Houston Astros is looking for an interested buyer for his private Pebble Beach estate. The cost to scoop up his oceanside compound? $37.9 million. Houston Astros owner and chairman Jim Crane has a reputation on the green for being quite the golf enthusiast, but that's not keeping him from listing his Pebble Beach estate. Crane, who was once ranked as one of Golf Digest's best CEO golfers in America, called this 1951 contemporary home since 1998, but listed the Germano Milono-designed compound just this month, according to the Los Angeles Times.

Originally purchased for $5.5 million, the 11,900-square-foot property is located in the most ideal of locations for any avid golf fan, granting close access to many of Monterey County's most treasured courses. All game aside, the palatial property also boasts some extraordinary panoramics both of Carmel Bay and Pescadero Point. If Crane, who currently has a net worth of $2 billion, finds a buyer looking to pay what he's asking, he stands to make approximately $35 million from the sale.

This Monterey Peninsula property is engulfed on every side by nature, from the shores of the Carmel Bay to the vibrant green landscape of trees wrapping around it. With a grand total of ten bathrooms, nine fireplaces, and eight bedrooms, the main house is one of the most sizeable located in Pebble Beach. Some of the most notable  living spaces include a spacious den, a large library, and a wine cellar. Crane's private grounds cover nine acres in total, plenty of room for the nearby pool house and cabana, a separate guesthouse, and even a caretaker's cottage.

The mansion's formal living spaces rely on the natural lighting and stunning ocean views provided by the contemporary walls of windows that wrap around the home. The glass panoramas climb high to meet the formal living room's vaulted ceilings, while touches of beige and the wood finish of the home's beams and frames round out the interiors of the home.

While the home itself is certainly the centerpiece of Crane's Pebble Beach property, there's plenty to be said about a relaxing afternoon in the residence's backyard. Beyond the home's sliding glass doors, multiple patios encase an infinity swimming pool. Further out, multiple terraces provide outdoor entertaining areas, stunning viewpoints of the bay, a fire pit, and even a bocce ball court. 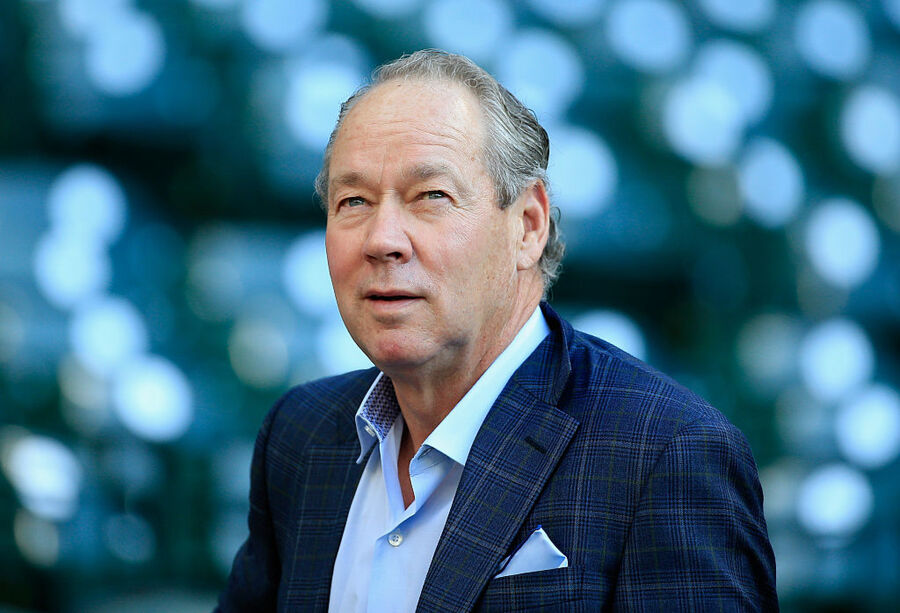 Businessman Jim Crane purchased MLB'S Houston Astros from Drayton Mclane in late 2011 for a reported $680 million, a deal that at the time was noted as the second-highest amount ever paid for a baseball team. Prior to his acquisition, Crane delved into the insurance industry, eventually launching Crane Capital Group, a company he remains chairman and CEO of to this day. Along with holding the title of majority shareholder of Champion Energy, Crane Worldwide Logistics, and Crane Freight & Shipping, the avid scratch golfer also owns the Floridian National Golf Club. He has previously been ranked as the nation's top CEO on the green.