By Joseph Gibson on February 3, 2021 in Articles › Celebrity Homes

Golf legend Greg "The Shark" Norman has listed his mansion in Jupiter Island, Florida for $59.9 million, reports The Wall Street Journal. The sale comes after Norman and his wife Kiki have been trying to sell it in one form or another for a whopping 14 years, even going so far as to tear down the original home and replace it with the current complex.

The estate is known as "Tranquility," and boasts a ten-bedroom, 32,000-square-foot main house on a sprawling eight-acre lot. Here's how it was described in official marketing materials:

"One of the original ocean-to-Intracoastal estates on Jupiter Island, the stunning full compound of buildings, situated on a sprawling 8.31-acre lot, was built for a barefoot elegance lifestyle. It boasts 31,820 total SF of living space, including the Main House, Coach House, Pool House, Tennis House, Boat House, Carriage House, Beach House & 5,000 SF basement. With 10BR,12+6BA,172′ of oceanfront, & 370′ of WF on the Intracoastal Waterway, the estate sports a modern tropical/yacht-inspired feel with dockage for a 150′ yacht. Remote & set back, the estate is a true escape, offering the utmost in privacy, and one-of-a-kind amenities including a US open sized tennis court, fitness center, movie theater, elevator, 2 main pools, spa, wine cellar, bar & gourmet kitchen." 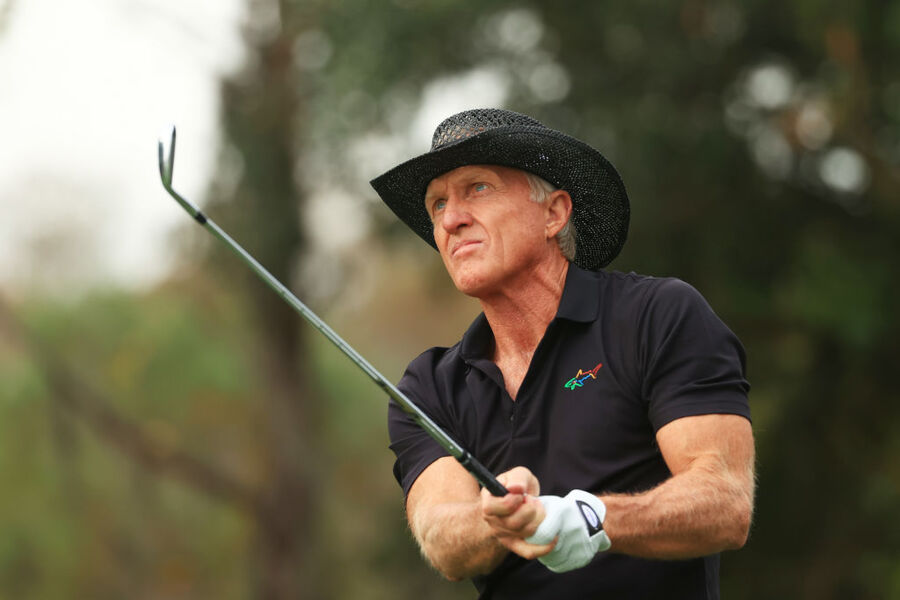 Mike Ehrmann/Getty Images
Norman has called Jupiter Island home for 30 years, after fellow PGA golfer Jack Nicklaus introduced him back in 1991. He told WSJ he decided to buy the home almost immediately, signing the contract on that very same day. He says the mansion was integral to his success on the golf course:
"This gave me a compound where I could create my own private practice world. I had my own tee box and bunker and putting green. I would come home and people would think I wasn't practicing, but I'd be home practicing and getting my game ready for the next week."
Tranquility may be an impressive palatial estate these days, but for most of the Normans' time on the island they lived in a much more modest cottage that dated back to 1902. As Norman himself explained, the house may have been home but it wasn't exactly made for an enticing sales pitch once they decided to try to sell it:
"It didn't have any insulation, not in the attic, not in the walls. As a matter of fact, it didn't even have a foundation. It was basically buried into the sand dunes, and there wasn't any hard foundation underneath…I had a lot of people who came to take a look at it. A lot of my wealthy friends came. People wanted to have a turnkey property."
After that, it was decided to get rid of the shack and replace it with a more conventional luxury property, and after first intending to live in the new home for some time they decided to turn around and sell it, since they intend to travel more and spend more time in Greg's native Australia.
The sale isn't the only one Greg Norman managed to make recently. He also told WSJ that he recently sold his Colorado ranch after listing it at $40 million in a soon-to-close deal.
Did we make a mistake?
Submit a correction suggestion and help us fix it!
Submit a Correction