By Brian Warner on January 5, 2014 in Articles › Celebrity Homes

We originally posted this article about Gianni Versace's Miami mansion going on the market for $125 million almost exactly one year ago. Six months later we updated the article because the price had been slashed from $125 million to $100 million due to lack of interest. A few months later the price was slashed again from $100 million to $75 million. Fast forward to the present and the house has apparently still not received a single legitimate offer. It's gotten so bad that unfortunately the current owner is headed for bankruptcy and a bank will auction off Gianni's house to the highest bidder this September. Bidding will start at $25 million and in order just to qualify for the auction, participants will need to place $3 million into an escrow account and provide proof that he or she has liquid assets worth at least $40 million. Below is the original article that describes the house's infamous history and jaw dropping amenities.

Are you interested in owning Gianni Versace's house in South Beach Miami? Do you have an extra $125 million laying around? Well then we have good news for you. Versace's massive beach front mansion, that was converted into an ultra-exclusive hotel and club after the fashion designer's tragic murder, has been put up for sale, and yes your eyes are not deceiving you the listing price is $125 million! Located at 1116 Ocean Drive, Miami Beach, FL 33139, Gianni Versace's House is 23,000 square feet and features 10 bedrooms, 11 bathrooms, a 12 car garage, lavish interiors and a pool that is lined with 24 karat gold. The master bedroom has a double-king sized bed and TWELVE closets. 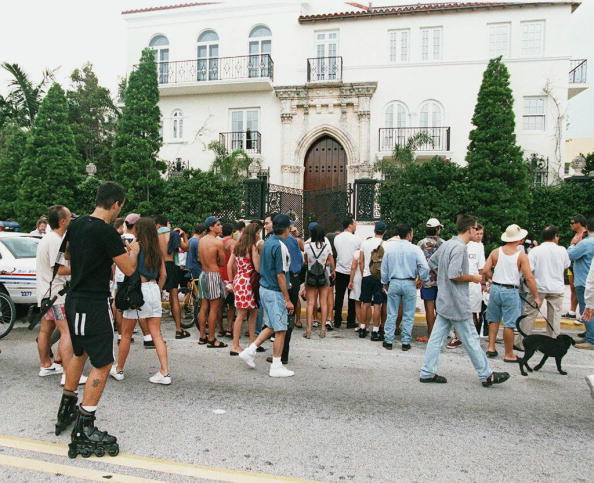 Legend has it that Versace bought the house in 1992 for $10 million after walking by it once and falling in love. Gianni promptly spent an additional $33 million upgrading, restoring and remodeling the entire property inside and out. Versace increased the square footage by 6000 and added the amazing solid-gold-trimmed pool. It was Versace's main residence until his tragic murder in 1997 at the hand of psychopath Andrew Cunanan. Cunanan actually shot Versace right on the front steps of this very house, right as the fashion legend returned home from a morning walk. After his death, Donatella Versace quickly sold the house for $20 million to Florida telecom mogul Peter Loftin. Loftin eventually converted the house into an ultra exclusive hotel/nightclub/residence and renamed it "Villa by Barton G".

At the time of his death, Gianni Versace's net worth was $1.4 billion. He left 50% of his company to his 11 year old niece Allegra. When Allegra turned 18, six years later, she instantly inherited $800 million. Not a bad 18th birthday present. So if you had the money, would you buy this house? Would you try to buy it on the cheap at auction?