By Chris Kelley on December 19, 2016 in Articles › Celebrity Homes

Hot off the news that he was the winning bid behind the famed $4 million Full House sale this summer, the show's producer, Jeff Franklin, has just unloaded one of his own properties – a Los Angeles spec home – for $20.2 million, according to the L.A. Times.

The contemporary-style estate, tucked within the 1300 block of Collingwood Place, was initially constructed solely on speculation just two years ago. The good news? Franklin, who currently serves as executive producer on Netflix's Fuller House, originally bought the property for $1.9 million in 1988, according to Variety. The bad news? Originally coming to market with a price tag of $38 million, the house he built on it ended up selling for $3.75 million less than his most recent asking price of $23.995 million.

While the home ended up going for nearly $18 million under its first-listed market price, the difference between the property's most recently listed value and what it actually sold for is nearing the cost Franklin just dropped into the San Francisco home known to millions as the Tanner family abode. According to real estate records, the buyer was a limited liability company based out of Nevada.

Perched atop a high promontory overlooking L.A.'s Sunset Strip, the five-bedroom, three-story home, described in marketing materials as an "architecturally inspiring shrine to modern allure and effortless sophistication", is the brainchild of architect Richard Landry. The 4,908-square-foot glass and stone Hollywood Hills West retreat can be described as nothing short of architecturally dramatic, boasting shimmering structure lights and an outside visual of the window-encased spiral staircase that spans the entirety of the home.

Through the over-sized solid-glass front door is the home's lofted entry, which opens up into the middle level of the layout and offers a steep overlook into the double-height living room/dining room combo below. Not unlike its own exterior, each level features dramatic details; with high textured and paneled walls creating a dramatic vaulted ceiling effect.

The home's glass and steel spiral staircase is a prominent piece in the very contemporary design of the spec, serving as the sole access point to all three levels of the home, including this unique living/dining area spread. Polished white terrazzo flooring spreads across this space's floor plan, joining together a compact and circular wet bar, the kitchen and several spacious lounge nooks. Like each level of the futuristic-inspired Landry build, what's outside as important as what is inside, exemplified by a wall of glass doors that merge the living space with an inviting outdoor patio.

Here's a video tour of the property:

As is obvious in the picture shown above, it's clear the architectural plan was developed with much more than contemporary notions in mind. The home provides a surprisingly impressive view of the city below, one that stretches from downtown to the Griffith Observatory – and if you step outside (perhaps on this cozy patio) on a clear day, that panorama extends all the way to the Pacific Ocean. Stunning views aside, this large poolside loggia comes packed with heaters, its own wet bar, and an attached pool bathroom and sauna, with a built-in grilling station just on the other end.

Franklin recently revealed that he was the buyer of the San Francisco Victorian home made famous by his hit sitcom Full House, suggesting that the property will become the ultimate haven for fans and may even play host to an upcoming anniversary special of the show. Franklin currently resides in a home built on a large stretch of hillside acreage in Beverly Hills, which includes the site of the 1969 Manson Family murders, that he acquired from Nine Inch Nails front man Trent Reznor in 1994. 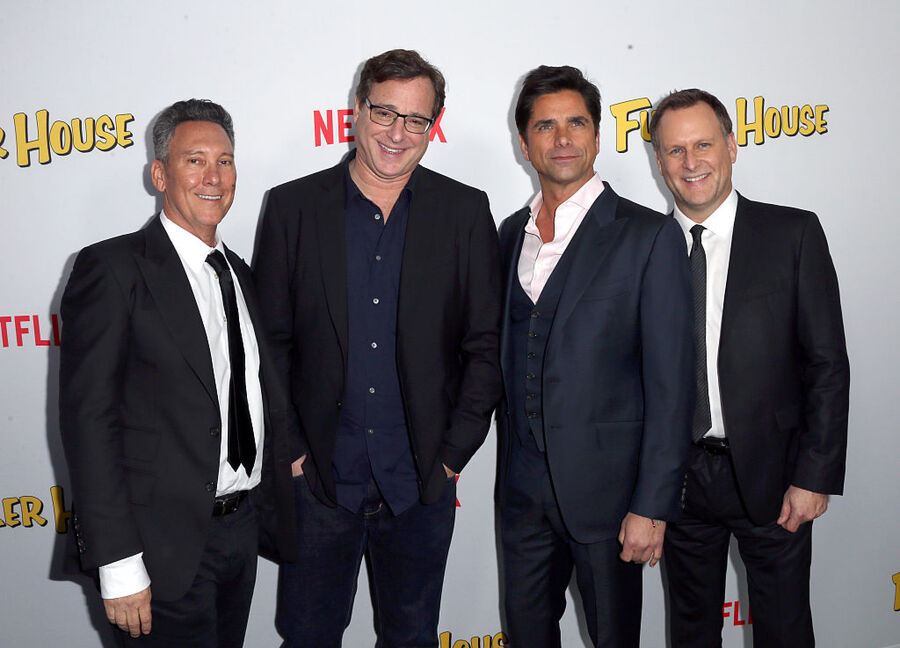 Television producer Jeff Franklin – net worth $180 million – created and executive produced both Full House and Hangin' with Mr. Cooper in the late '80s and early '90s for ABC, both of which have earned over a half a billion dollars in revenue. His current sitcom, Fuller House, can be seen on Netflix.