By Brian Warner on October 28, 2018 in Articles › Celebrity Homes

I grew up in an area of Northern California called Marin County. Located on the other side of the Golden Gate Bridge across from San Francisco, Marin County is a wealthy suburb made up of rolling hills and picturesque views from the mountains to the ocean. My favorite part about Marin is that it's where a bunch of awesome celebrities moved after they struck it rich. Celebrities such as George Lucas, Jerry Garcia, Andre Agassi, Carlos Santana, Sammy Hagar, Huey Lewis and the members of Metallica (James Hetfield relocated to Colorado in 2014, but he is still one of the county's largest land owners), have all called Marin County home.

In my opinion, Tiburon is where you want to live after you sell your company for a billion dollars. Sure, you could buy a house down in Silicon Valley or even Los Angeles, but only Tiburon allows you to live in a ridiculous mansion that has a private beach and unobstructed views of the Golden Gate bridge while also being just a 30 minute ferry ride to San Francisco or a 30 minute drive to Napa.

Beverly Hills is amazing, right? Yes, but in reality a big chunk of Beverly Hills is apartment complexes and shopping districts. And most of the actual "mansions" in BH are on flat streets with no views and lots that share a backyard wall with two neighbors.

Imagine if you took Beverly Hills, stretched out so that half the land was rolling undeveloped hills and plopped it into the middle of a bay. Then imagine if you squished the land together so every house had an amazing view. That's Tiburon. Here's a map view: 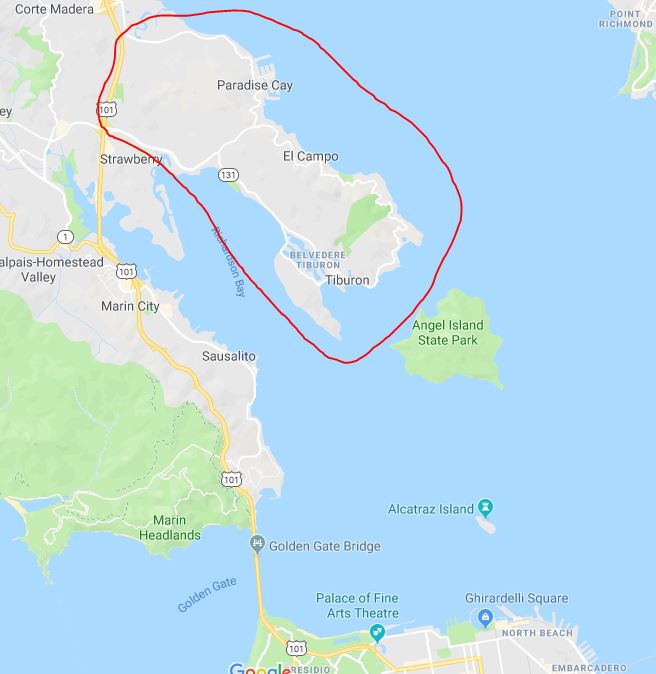 In the area circled in red above, a two-acre parcel of land could easily cost $5-10 million. So how much would a sprawling 110-acre plot of undeveloped land cost? And what if those 110-acres were spread over Tiburon's most desirable hill with perfect 360-degree views of the entire Bay Area?

And believe it or not, that actually sounds like a bargain to me. In a different world, this property should sell for way way way more than $110 million. Easily $200-300m, or more. There should be tech billionaires lining up to bid for the rights to build a dream palace right here: 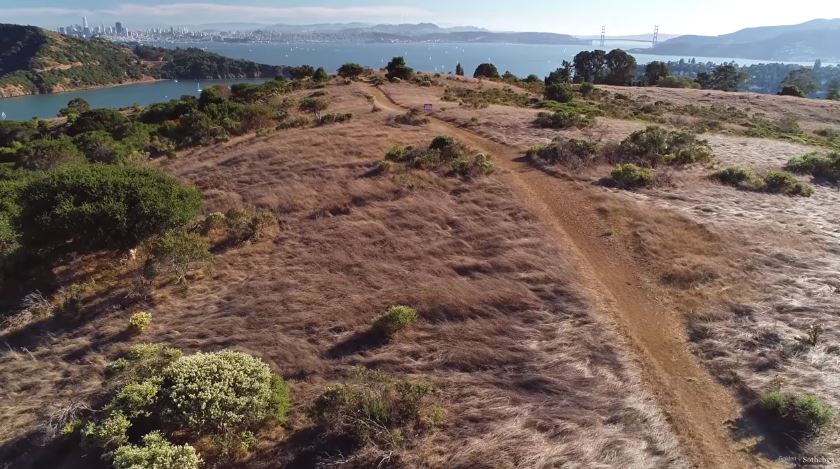 So why hasn't a billionaire built a ridiculous compound here yet? Well, for one, the property hasn't been on the market in over 100 years. And secondly, this property, now branded as "Easton Point", comes with a catch. A big catch that I'll explain below.

Below is another map of Tiburon. I've circled the area now known as Easton Point that is now for sale: 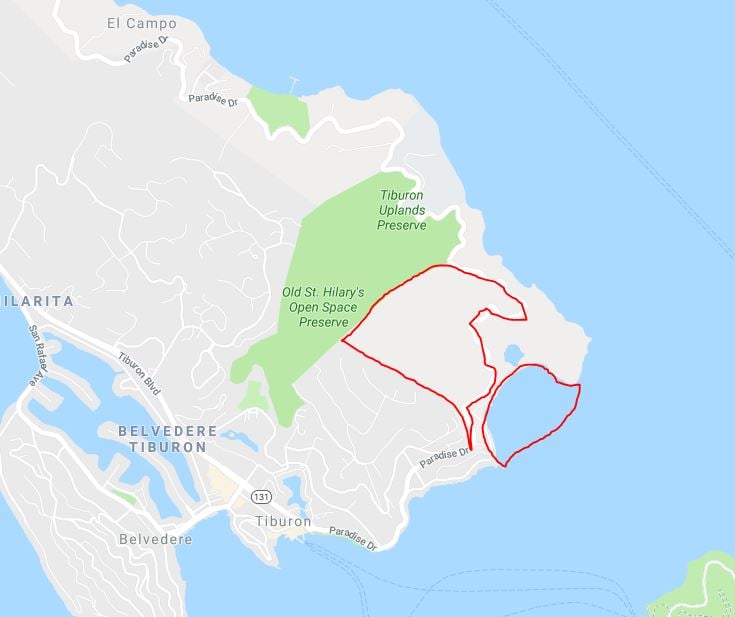 If you buy Easton Point, you are also buying a decade (maybe multiple decades) of legal battles with local residents who want to keep the land undeveloped to preserve its beauty, wildlife and hiking trails.

It's an interesting dilemma. In 1912, a person named John Reed, was smart enough to buy this land from the county. In 1958, John Reed's five living heirs formed a company to own the land. The company was called The Martha Co. and each of the five branches of his descendants were given an equal ownership stake.

Shouldn't these lucky heirs be allowed to reap the maximum amount of benefits afforded to them by their lucky and forward-thinking grandfather? Imagine if your grandparent was smart enough to buy an acre of beachfront property in The Hamptons or 10,000 shares of Coca Cola back in 1935. Shouldn't you be rich today from those wise investments?

John Reed's descendants thought so, and in the early 1970s they filed plans to develop several hundred apartment and single-family home units on the land. They were quickly met with fierce resistance.

Not coincidentally, in 1974 Marin County passed a law that re-zoned properties like the Martha Co. to only have single-family homes with MINIMUM 10,000 square foot lots. This law effectively reduced the number of build-able units on the land from several hundred to just 34.

In 1975, the Martha Co. sued Marin County for essentially stealing their land without offering them any form of compensation.

The last 40+  years have been nothing but lawsuits. Local, state and federal. To complicate matters, over those 40+ years, residents cut down fences around the property and began hiking as they pleased.

I've done it before. It's a gorgeous hike.

Residents now claim that the land has transformed into a public space that could never be developed into even a single home. For their part, the Martha Co. has consistently pointed out that hikers are trespassing on private property.

In 1988, Martha filed to build 70 lots. They were denied. In 1990 they filed to build 30 lots while still appealing the denial of their 70-lot plans. Denied. In 1992 they filed to build 32 lots. Denied. In 1994, twenty years later, they finally won approval to build 19 lots. They could potentially build 43 if they solved some water and road issues. But wait! Construction was then held up for a full decade after a scientist found an endangered spider on the land. Literally ONE spider. Maddeningly, after a decade of delays it was eventually determined that this endangered spider was not at all endangered. It was a totally common spider. Today construction is on hold as several lawsuits seek to show that there's a legal precedent to keep the land accessible to the public.

Here's an artist's rendering of the potential planned housing development: 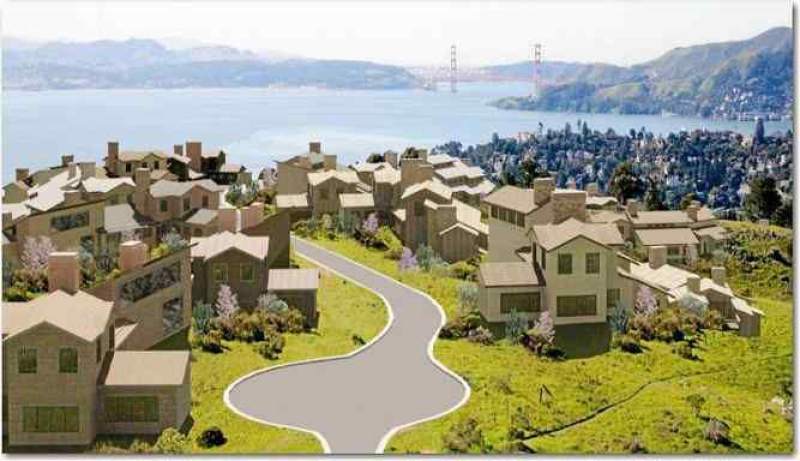 After 40+ years the Reed family descendants are ready to throw in the towel, lick their wounds and recoup some money. Over the years, they've actually spent more than $10 million on various surveys, studies, architectural plans and, obviously, lawsuits.

So if you buy this property, that's the kind of fight you are facing. Oh. And if you spend $100 million to buy it, you'll owe $1 million in property taxes every year as the legal battle wages on for another decade or two.

Now let's look at the prize that's up for grabs. Take a look at this video that was recently put out by the Martha Co.'s real estate agency and you'll understand the significance and beauty:

If a private buyer does not step up, local residents have raised around $3 million to buy the land. Clearly that's not going to work for the Reed family. Local residents have also made it clear that even if a new owner plans to just build ONE HOUSE, they will fight them bitterly for as long as they can.

Another option would be a San Francisco-based organization called the Trust for Public Land, which has spent $8 billion since the 1970s buying 3 million acres of property all over the country. The Trust has been known to buy private properties for $10+ million. It even spent $100+ million to buy 10,000 acres of the Rocky Mountains in Colorado. Is The Trust interested in preserving  this open space in their backyard? Could they come up with $50 million, and would the Reed family accept it?

And then there's my favorite option: Mark Zuckerberg, a billionaire who is about as popular nowadays as diarrhea on your honeymoon, should buy the property for full value and donate it to the state. He'll get a huge tax write off and maybe a slight improvement in his public image. Martha Co. gets their money. Residents get their land. Win, win, win.

What are your thoughts? If you had the money, would you buy Easton Point and roll the dice? What is the market value of an extremely amazing piece of property that also comes with a horrendous uphill legal battle? You might be better off driving an hour south to buy this 74-acre property in Woodside, California. Or you could spend $150 million to buy the late Paul Allen's 122-acres in Beverly Hills. As long as you're not planning to build 50 homes and apartments on either property, you won't have any legal problems. But you also won't have the views of Easton Point!