By Amy Lamare on November 18, 2014 in Articles › Celebrity Homes

Microsoft co-founder Bill Gates is the richest person on the planet with a net worth of $81 billion. As you might imagine and expect from someone who made his fortune off the technological revolution, the Gates family compoud up in Seattle is absolutely incredible. The house is so famous that it has it's own wikipedia page. It is frequently regarded as one of the most luxurious and technologically advanced private residences in the world. Let's find out why.

Located in Medina, Washington, the waterfront mansion itself is over 66,000 square feet. Nicknamed "Xanadu 2.0", which is a reference to the fictional home of Charles Foster Kane from the movie "Citizen Kane". The Pacific Lodge-style home took seven years and $63 million to build. Three hundred workers were required to build the house, of which more than one hundred were electricians who installed an estimated 52 miles of optic cables!

The property features every piece of technology your wildest imagination could ever conjure, plus a bunch of stuff you probably could not imagine. But one thing you won't find in Gates' home is Apple products – they are strictly verboten at Xanadu 2.0. Below is a list of 15 crazy facts about Bill Gates' house, plus some photos which might be the closest any of us will every get to the amazing property in real life… 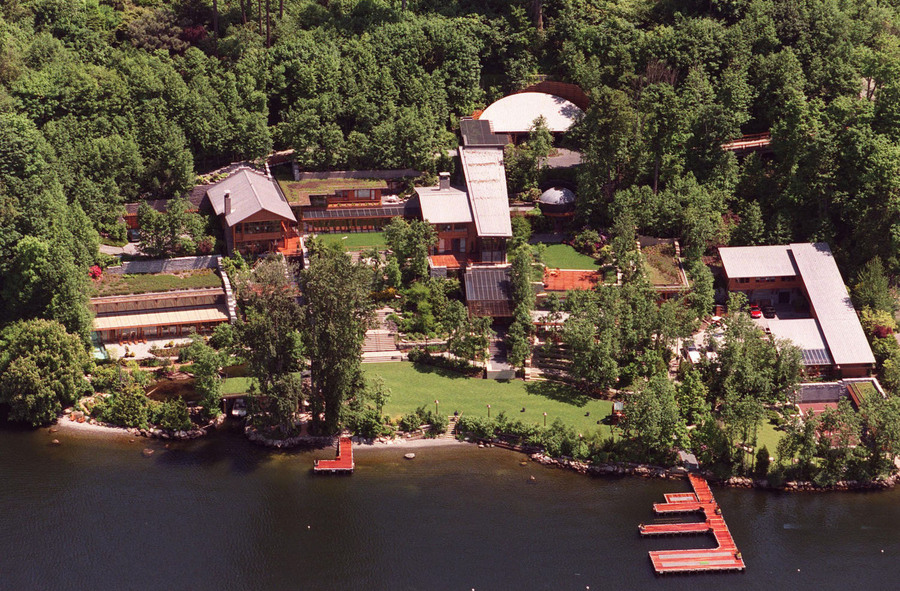 1. The property is worth more than $150 million. The King County Public Assessor's office lists the property worth at $148 million. In 1988 when Gates purchased it, the property was worth $2 million. His property tax bill is reportedly $1 million every year.

2. Half a million feet of lumber was used on the house. Xanadu 2.0 was built using wood from 500 year old Douglas fir trees.

3. When guests arrive at Xanadu 2.0, they are given a pin that syncs with sensors all over the house. They enter their lighting and temperature preferences and as they move through the home, those change to suit their particular fancy. Music also follows guests from room to room via speakers hidden behind wallpaper.

4. The 60 foot by 17 foot swimming pool has it's own 3,900 square foot pool house. Swimmers can dive under a glass wall and re-surface on a terrace attached to the pool house. The pool also has an underwater sound system so your music can follow you even when you are submerged.

5. You can change the home's artwork with a push of a button. Gates' home has $80,000 worth of computer screens on the walls. You can make the screens display your favorite photographs or paintings with the touch of a button.

6. Xanadu 2.0 has a trampoline room. Not only does Gates' house feature a dedicated trampoline room, but it has 20 foot ceilings so that the billionaire and his friends can get as much air as possible. The trampoline room is part of the property's 2,500 square foot fitness facilities that also include a sauna, steam room, and separate locker rooms for men and women.

7. The banquet hall can seat up to 150 people. Just in case Bill and Melinda want to throw a dinner party for 150, their 2,300 square foot banquet hall can fit that bill. The room has a wall made of 24 40-inch video screens that combine into one giant image. The house also has a more intimate dining room at 1,000 square feet that can sit 24 people by a fireplace.

8. The house has six kitchens. No matter where you are in Xanadu 2.0, you're never far from a refrigerator stocked with food and drink.

9. The 2,100 square foot library rests under a domed roof and has two secret bookcases, one of which holds a hidden bar. The library houses the Codex Leicester, the 16th century manuscript by Leonardo da Vinci that Gates paid $30.8 million for in 1994. The ceiling of the library has this quote from "The Great Gatsby":

"He had come a long way to this blue lawn, and his dream must have seemed so close that he could hardly fail to grasp it."

10. The home's 24 bathrooms include 10 full baths ensuring that when nature calls, you can make it to the john quickly.

11. A tree is monitored electronically 24 hours a day. Gates has a favorite tree. He became very fond of a 40-year old maple tree that is situated close to his driveway. He has it monitored by a computer so that if at any point it becomes too dry, it is automatically watered, day or night.

12. Gates can park 23 cars in his garage. Actually, the property features a number of garages in different areas. One of them is an underground cave made out of concrete and stainless steel that can hold 10 cars.

13. The property has its own beach with very special sand. Gates' house is lakefront and he has sand imported each year from St. Lucia by a barge especially for his beach.

14. The Gates family can fish from their own stream. The property features an estuary and artificial stream that were created to solve any issues with runoff that the large walls of the house and property may have caused. Gates keeps the stream stocked with sea-run cutthroat trout and salmon.

15. You can pay for a tour of Xanadu 2.0. Bill periodically auctions tours of his home to benefit his charity, with one tour selling for $35,000 in 2009. For your money, the tour also includes appetizers.