Ellen DeGeneres Owns At Least $100 Million Worth Of Real Estate In The U.S.

There are some people who buy a house and live in it for years, if not for the rest of their lives. Then there's Ellen DeGeneres and her wife Portia de Rossi. They are what you'd call 'serial house flippers.' Since 2003, Ellen and Portia have bought and sold more than 20 properties. In 2019 alone the couple sold three properties, of which the least expensive one was nearly $7 million! It all started back in 2003 when DeGeneres bought a house in the Hollywood Hills for $6 million. Basically, DeGeneres buys and sells luxury California properties. Sometimes she moves several times a year. While she does make quite a nice profit from this practice, moving that often sounds exhausting. But, I suppose, when you've got a net worth of $400 million you can hire people to pack your home, move it, and unpack it, while you relax at a spa. Or, if you're Ellen, one of your other houses. She's sold her flipped homes to a number of celebrities like Ryan Seacrest, Napster's Sean Parker, and former Google CEO Eric Schmidt. She's bought properties that formerly belonged to Brad Pitt and Adam Levine – both of whom are also pretty much serial house flippers. But, don't call Ellen a flipper. In an interview on the Today Show, she said that she and Portia move so often because they enjoy it.

"We buy a house and we love it, and we stay in it. Then we get a little bored because we like a different style or different aesthetic — and I love furniture and decorating — so if I find something else, and we make money, why not move to another house?"

She documented her journey of buying and selling houses in her 2015 book, Home.

In the Today Show interview, DeGeneres also explained that growing up they didn't have a lot of money.

"We lived in apartments. We would look at houses every Sunday, we would go to open houses, but we could never afford a house. As a kid, I thought — 'That's going to be my house.' Now, I just buy as many houses as I can." 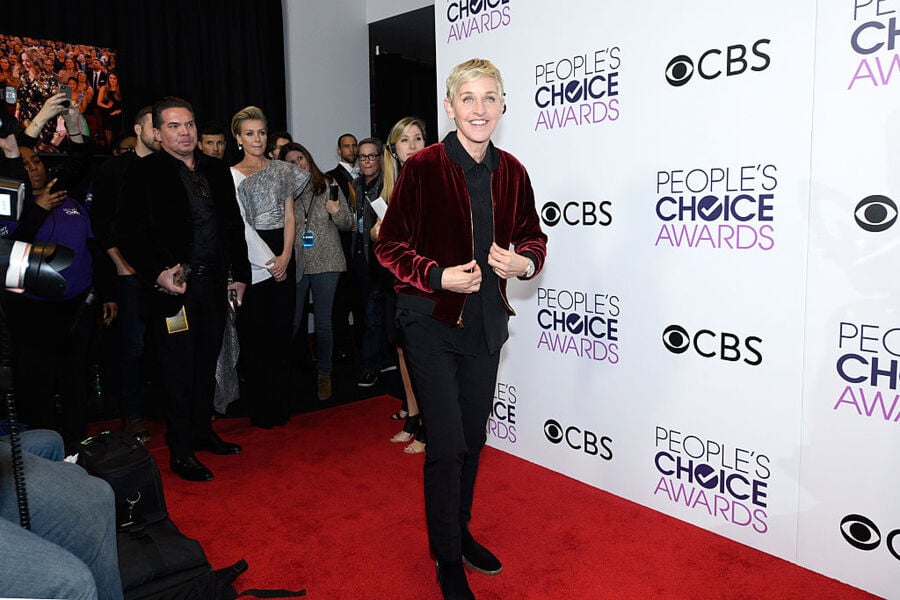 In 2003, Ellen bought a four-bedroom, four-and-a-half bathroom home. She sold it three years later to Will Ferrell for a tidy profit.

This property is located in the Laurel Canyon neighborhood of Los Angeles. This midcentury modern style house in the Hollywood Hills is nicknamed "the treehouse," due to the 2,000 square feet of outdoor living spaces. A year after she moved in she sold the two-bedroom, two-bathroom property to director David Weissman for almost a million-dollar profit. Since then, the home has also been owned by Heath Ledger and Adrian Bellani and is currently Josh Hutcherson's house.

Time owned: less than a year

In 2007, DeGeneres bought a gorgeous seaside estate in Montecito, California. Later that same year, she sold it to former Google CEO Eric Schmidt.

In 2008, DeGeneres bought a 9,200 square foot home in Beverly Hills for $29 million. She then bought the two surrounding homes to create a compound. DeGeneres and de Rossi got married at this house. By 2012, they had sold the compound to Ryan Seacrest at a loss due to the drop in the price of real estate in Los Angeles at the time.

DeGeneres and de Rossi picked up this beach pad that had formerly belonged to Brad Pitt and Angelina Jolie. The property had backyard beach access, a tennis court, and a private beach cove. However, it didn't have anything to renovate, since Pitt had already done that.

The same year as she sold her Beverly Hills compound to Ryan Seacrest, she picked up a 26-acre horse ranch in Thousand Oaks, California. The ranch was built in the 1920s as an estate for actor William Powell and had served as both a monastery and rehab center in the past. DeGeneres and de Rossi lived in every cabin on the property during an extensive, year-long renovation.

This home is located in the super chic Trousdale Estates neighborhood of Beverly Hills. Designed by acclaimed California architect Hal Levitt, the home was once photographed for a Versace campaign. This was one of DeGeneres' favorite homes. They sold the mid-century modern home about a year later and made just short of $3 million in profit.

The couple paid nearly $40 million for a home in the Holmby Hills neighborhood of Los Angeles. Just six months later, they sold the lavish property for $55 million to Sean Parker.

In 2015, they bought a four-bedroom, eight-bathroom Beverly Hills villa. Over the course of the roughly three years DeGeneres and de Rossi owned the property, they more than doubled their investment.

This rustic Santa Barbara estate is in the same neighborhood as Oprah Winfrey's "The Promised Land" estate. DeGeneres only spent about a year there. It now belongs to Tinder founder Sean Rad.

Time owned: less than a year

DeGeneres and de Rossi didn't stay in their five-bedroom Beverly Hills mansion for long. They made a half a million profit for their time there.

The couple bought another Santa Barbara ranch. About a year later, they sold it to Nickelodeon president Brian Robbins.

Last year, the couple bought a five-bedroom, 12-bathroom, newly renovated mansion in Beverly Hills from Adam Levine. They remain in this home to this day.