Celebrity couple Ellen DeGeneres and Portia de Rossi want to sell you their lavish Montecito mansion for $45 million. At such a high price, this may go down as one of the most expensive properties the two have ever sold.

While not the most well known fact about Ellen DeGeneres and her wife, Portia de Rossi, there is no doubt that the two are prolific house flippers. The couple just recently listed their sizable Italian-style villa located in Santa Barbara County's Montecito community for a whopping $45 million. Despite writing her in 2015 book, "Home: The Art of Effortless Design" that the home was idyllic enough to hang onto, actress and TV host DeGeneres is hoping to fetch well over the $28.8 million she and her wife paid for the property in 2013.

Placed upon a nearly 17-acre lot, the 10,500-square-foot Tuscan-style mansion was constructed by architect Wallace Frost in 1934 and served as his personal residence. Surrounded in a maze of trees, the home itself is accessed only by a one-quarter-mile driveway and provides astounding views of the ocean and nearby mountains. While the grounds already boast a variety of unique sculptures, fountains, gardens, and even its own swimming pool, new editions to the property include a tennis court, lap pool, and a large entertainment pavilion dubbed as Jordan Hall in marketing materials. The spacious ocean view estate comes with six bedrooms, six full bathrooms, and two half bathrooms.

Inside the multi-winged home, an authentic taste of the 17th century purposefully overwhelms the design and ambiance of each room. Some of the most dramatic details of the elegant abode include its filigreed wrought iron details, stone and wide-plank hardwood floors, Italian wall accents, vintage light fixtures, and exposed wood beamed ceilings. Among the many entertaining and living spaces include the home's formal living room and accompanying formal dining room, a sleuth of libraries and attached reading areas, kitchen plus breakfast room combo, a family/media room, and a total of nine fireplaces.

The expansive and secluded hillside estate includes a large guest apartment, as well as Jordan Hall, the property's entertaining hall. Similar in appearance to a cottage, Jordan Hall towers over the first of the property's two swimming pools and includes a tin-roofed screen porch, several lounge and entertaining areas, high-end kitchen, a bathroom that includes a private courtyard with an outdoor bathtub, an al fresco dining terrace, and a sculptural wet bar.

The grounds themselves spread far and wide, something DeGeneres and de Rossi purposefully achieved in their initial acquiring of the land. Property records show the couple bought two of the estate's three parcels for $26.5 million before purchasing an adjoining vacant lot to round off the rest of the bill, bringing the total size of the gated estate to exactly 16.88 acres. 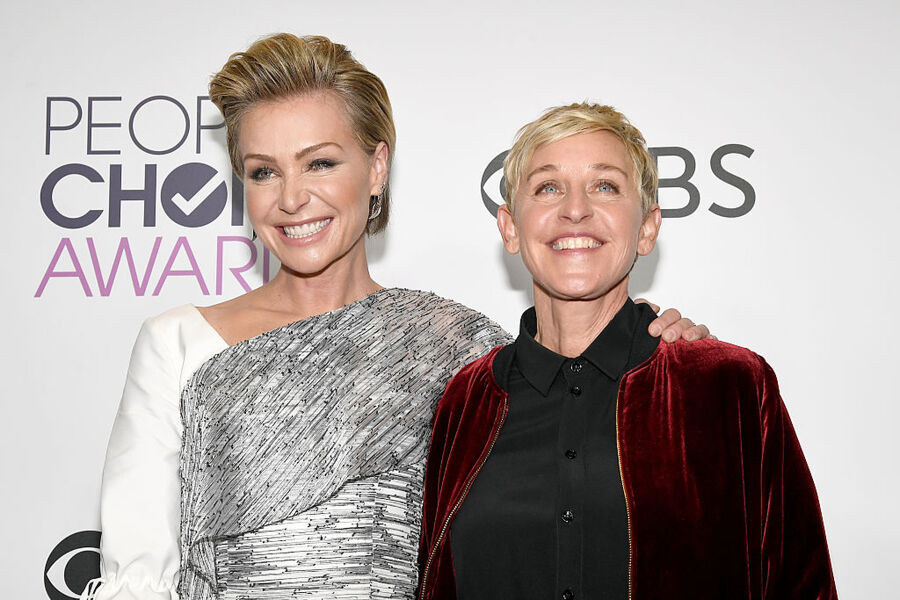 Comedian, actress, and TV personality Ellen DeGeneres and her wife, actress Portia de Rossi, have a combined net worth of $360 million. Ellen DeGeneres rose to fame as a comedian, eventually earning her television stripes in the five-season run of her self-titled sitcom Ellen. Since 2003, DeGeneres has hosted The Ellen DeGeneres Show, one of the most-watched shows on daytime television. DeGeneres and de Rossi have been together since 2004 and were married in 2008.