Eli Manning's Home: A Top Condo for a Player at the Top of His Game

By Paula Wilson on February 6, 2012 in Articles › Celebrity Homes

Eli Manning must be sitting on top of the world today, after leading the New York Giants in a thrilling game that has made them the Super Bowl XLVI Champions.  Though the year started off poorly for the Giants, they managed to get it together late in the season.  Their momentum carried them through to the Super Bowl and possession of the coveted Vince Lombardi Trophy.  Eli Manning also received the award for Most Valuable Player.  All in all, it was a pretty great way to end an otherwise rough season.

The media circus surrounding the Super Bowl will dissipate over the course of the next few weeks, and Mr. Manning will finally have a moment to slow down and enjoy his home in Hoboken, New Jersey.  Unlike many star athletes, Mr. Manning's home is a relatively modest condo.  Instead of buying a palatial estate, or a home with massive grounds, multiple swimming pools, and a three-car garage, Mr. Manning opted for a simpler home with multiple high-tech touches. 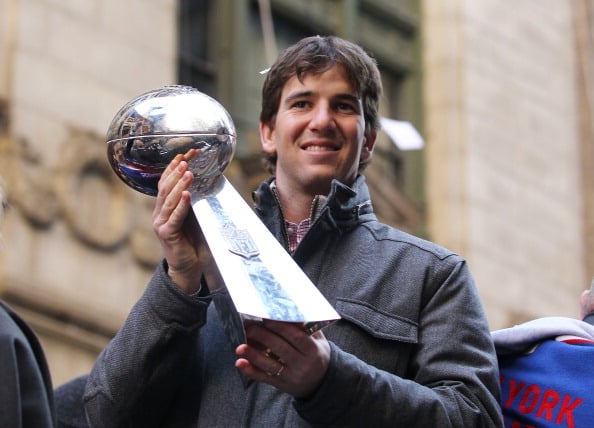 His 3000 square foot condo was recently gut renovated to accommodate some major technological changes.  The space is now almost completely automated.  With multiple bedrooms, a dining room, kitchen, a stunning master bathroom, a large living room, a game viewing room, an office, floor-to-ceiling windows, and beautiful views of Manhattan, Mr. Manning's home is surprisingly unostentatious.  However, the entire home is wired with one-touch controls that allow him to do such things as lower all the lights in the house at once.  He has a hidden bar, which reveals itself when you press a button on the wall.  A wall-mounted controller in the master bathroom, allows him to select music, and specialized water-resistant speakers provide the ultimate surround sound experience.  There are hidden speakers all over the house, in fact, so that music can be piped into every room.  He also has a one-touch controller that raises and lowers a double set of motorized blackout shades throughout the house.  Now that he has finished out a stressful football season, he can go home, touch one button, and take a break.  He's earned it.