By Chris Kelley on January 21, 2017 in Articles › Celebrity Homes

Talk about an extreme off-court play! L.A. Clippers' DeAndre Jordan has just passed off his insane Pacific Palisades mansion for $11.75 million – and while it may seem like quite the deal, Jordan's December sale comes at a loss nearing $1 million.

Clippers center DeAndre Jordan is saying goodbye to a home he scooped up just over a year ago, but not all the news is good. Yes, Jordan is making off with $11.75 million for the 10,500-square-foot Cape Cod-inspired mansion. Unfortunately, however, that's nearly a $1 million loss compared to what he paid for it just over a year ago and $650,000 less than its most recently listed price tag of $12.4 million. But if his rebound skills off the court are anything like they are on, you can rest assured he'll likely recover from the loss in no time.

The nearly brand new modern-style masterpiece was completed in 2015, shortly before Jordan shelled out $12.7 million for it. While the "all-sports" mansion's pool and basketball court may be the first to catch your eye, the accompanying city and ocean views included with the home are just as jaw-dropping as its amenities. Nestled behind the gates of the exclusive Palisades Riviera neighborhood, the 7-bedroom, 10-bathroom estate features such deluxe add-ons as a temperature-controlled wine room, a professional theater with stadium seating, and a private indoor spa complete with its very own exercise pool and gym.

With excellent views of the Pacific Ocean and the sweeping sights of the city of Los Angeles below, it's no wonder why the home features multiple balconies (including this unique indoor-outdoor living room setup). One of the home's many smart home security features includes a retractable entryway separating the formal living room with a balcony lounge that wraps around the side of the house. Because with amazing weather and amazing views, why not, right?

Not to be outdone, the Cape Cod's master suite features a private balcony of its own that seems to tower above the city. Complementing the mastery of high vaulted, intricately detailed ceilings and sharp modern moldings, the master bedroom comes with a posh seating area, a royal-fixture fireplace, and a large bathroom that could quite literally double as a high-class locker room for the Clippers because of its size.

While the just-sold mansion comes with its own basketball court (likely to keep Jordan sharp off-the-clock), it is far from all work and no play. Besides the court, the property includes a putting green, exercise pool, lounge spa, and a drought-resistant turf play area. Other goodies that come with the already sweet deal are an outdoor kitchen, a home theater with a 130-inch screen, a three-car garage, a private elevator, and a secret room accessible only by way of a thumbprint entry system. 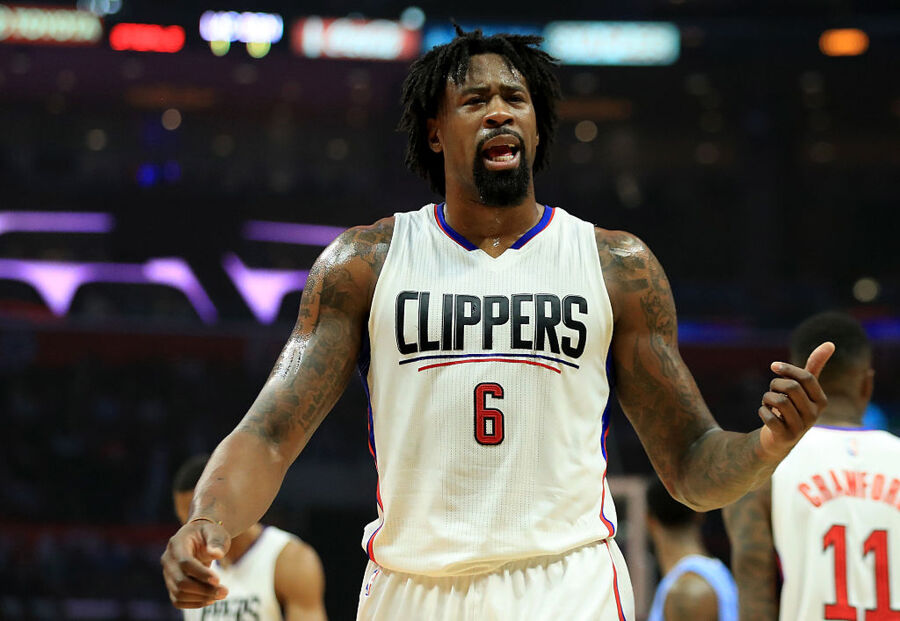 Professional basketball player DeAndre Jones owes his $13 million net worth to his award-winning skills on the court. The 6'11" center got his start with high school basketball at Christian Life Center Academy before continuing his career with Texas A&M. Jones was drafted #35 by the Los Angeles Clippers in the 2008 NBA Draft and later signed a deal worth $43 million with them. Jordan is both a two-time All-NBA and two-time NBA All-Defensive Team member who has twice led the league in rebounding.