By Chris Kelley on November 22, 2016 in Articles › Celebrity Homes

Tattoo and cosmetic tycoon Kat Von D is making waves in the Los Angeles real estate market after grabbing up a piece of property that's both a silver screen favorite and a historic estate. Some paperwork, a few signatures, and $6.5 million later, the former LA Ink star is now officially the owner of the Cheaper by the Dozen house.

Located in the Los Angeles, California, neighborhood of Hancock Park, this three-story Victorian home packs just as much character as the former reality television star who just closed on it. Built in 1890 during a massive Los Angeles County growth spurt, the 12,565-square-foot home was designed by Isaac Newton Van Nuys and then was moved to its current location by his son in 1915.

Situated on top of a 27,000-square-foot lot in Windsor Square, it's no doubt this home is the ultimate jackpot when it comes to spacious living in Los Angeles. With eleven bedrooms and ten bathrooms, it's no wonder the Victorian classic was selected as the home featured in the 2003 blockbuster Cheaper by the Dozen. The movie stars Steve Martin and Bonnie Hunt as parents of twelve children, including Hilary Duff and Tom Welling, and is based on the autobiographical Frank B. Gilbreth, Jr. book of the same name.

Each room of this unique and spacious estate echoes to a new theme, design, and call to the historic roots of the property. The home's music room/ballroom features an elegant fireplace complemented by a large, unique mural on the ceiling. Other rooms boast unique fixtures and ceiling moldings, including a bar room that has carved wooden walls throughout. The home totals three stories, each comprising of several bedrooms, with the top floor containing a kitchenette.

Although not required at the time of initial construction, former owners have installed a pool and made way for a lounge-worthy backyard, complete with a decorative red brick footpath. Many of the surrounding homes near Von D's purchase also feature high-end designs and expensive detailing, including the homes of neighbors Daman Wayans and Shonda Rhimes.

While Von D walked away with the Hancock Park home's keys for just $6.5 million, Trulia shows that the property was initially listed at $8.19 million. Although the purchase was by no means cheap, Von D can rest assured knowing that in purchasing such a large home, she's averaging about $520 per square foot. And the best news of all? If Kat Von D ever runs out of space in her eleven-bedroom home, there's an additional two bedrooms and one bathroom located over the property's garage. 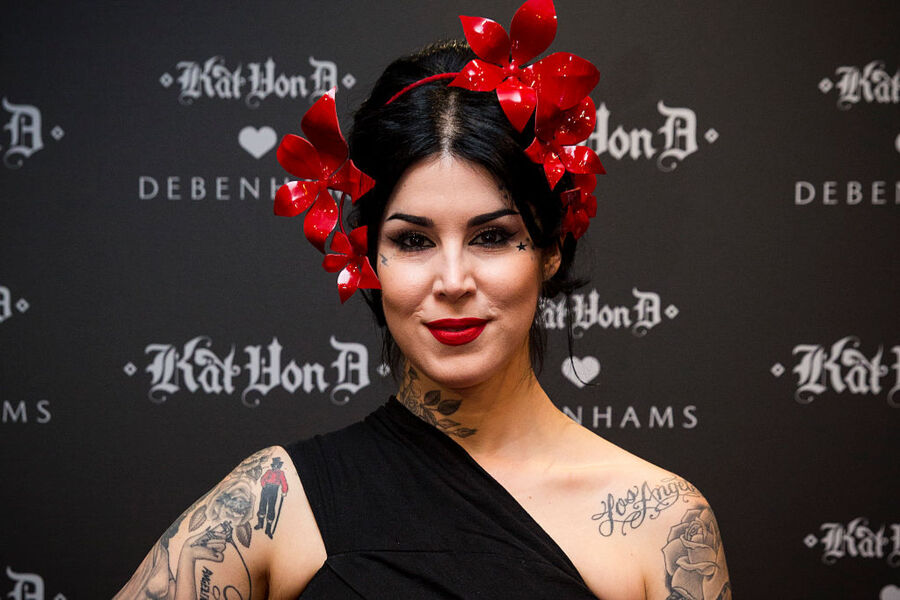 Born Katherine von Drachenberg, tattoo artist Kat Von D rose to prominence through her role and artwork featured extensively on the TLC reality show LA Ink. In 2008, Von D launched her own self-titled makeup line. Beyond her roles as a tattoo artist, businesswoman, and cosmetics entrepreneur, Von D has won several awards from animal rights organizations. Von D has a net worth of $30 million.