By Brian Warner on December 18, 2014 in Articles › Celebrity Homes

Back in mid-September we wrote about an absolutely insane Beverly Hills mansion that had recently hit the market. The mansion itself was incredible enough to deserve its own article, but the house was especially notable because of a rumor that Beyonce and Jay-Z were actively looking to make an offer. It wasn't a rumor, it was a verified fact. Mr. and Mrs. Carter had already spent the summer renting a house a few doors down from the Playboy mansion that was setting them back $200,000 a month. The Carters visited this newly-built hillside mansion several times and were reportedly ready plunk down an offer. There was just one problem, someone wanted it even more. That person was 35 year old Minecraft creator Markus Persson, more commonly known as Notch.

And for those of you who have never heard the name Markus Persson or his pseudonym Notch, he is a the Swedish computer programmer who created the massively successful video game Minecraft. Just one week before we wrote about Beyonce and Jay-Z touring this mansion, Notch sold his Minecraft holding company "Mojang" to Microsoft for $2.5 billion. The sale came after Notch had already earned a little under $300 million in royalties from the game. As 71% owner of Mojang, Notch took home around $1.7 billion before taxes. After it's all said and done, Notch was left with a personal net worth of $1.3 billion. Oh and btw, we should also mention that Notch spent less than a month creating Minecraft back in the summer of 2009. Not a bad little haul.

Notch's $1.3 billion net worth is $300 million more than the $1 billion combined net worths of Beyonce and Jay-Z.

When we wrote about the Beverly Hills megamansion back in September, it was reportedly on the market for $85 million. It turns out that number was a little inflated. After several weeks of back and forth offers, Notch used his superior wealth to outbid America's favorite couple. The final winning bid was $70 million.

So what will Notch be getting for $70 million? Located on a one acre lot up in the hills of Beverly Hills, this newly-built 23,000 square foot mansion absolutely redefines ultimate luxury living. The house that was on this lot previously was bought in 2012 for $12.6 million, then torn completely down to the ground to make way for this new eight bedroom, 15 bathroom masterpiece. The house has a stunning infinity pool, movie theater and closets that are literally bigger than most apartments. The sale includes all furniture, artwork, several cases of Dom Perignon, several cases of tequila and vodka. My words don't do it justice. Watch this video that the real estate firm listing the house just released. Make sure you see the elevator-activated garage at 2:40. Unreal.

To celebrate his victory, Notch just tweeted this photo: 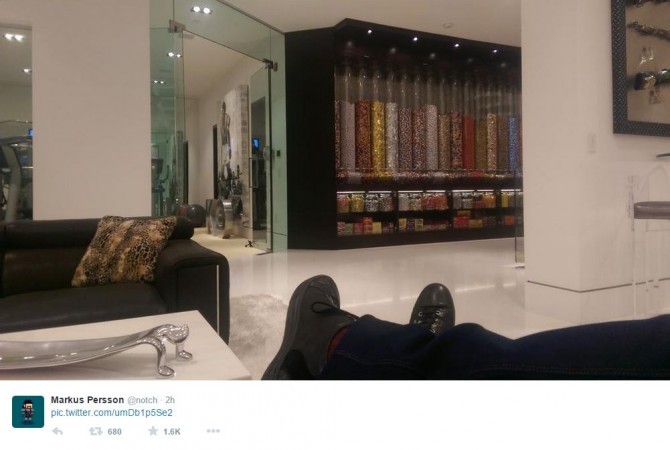