By Paula Wilson on September 1, 2013 in Articles › Celebrity Homes

Barry Zito is one of professional baseball's mysteries.  He's not making headlines with scandals.  He's not showing up at major events with the latest starlet of the month on his arm.  He's a former follower of Zen, now gone born-again Christian, who occasionally dyes his hair blue, and practices yoga.  The majority of the press attached to his name has been about his ball playing.  Which, strangely enough, makes him stand out among the current crop of Major League Baseball players.

He made a name for himself nationally playing baseball in college.  While in school, he was a Freshman All-American selection, a First-Team All American selection, and the PAC-10 Pitcher of the Year.  After turning down offers from two teams in 1998, he chose to sign with the Oakland Athletics in 1999.  He pitched very successfully in the Minor Leagues, and was promoted to MLB play just a year later.

His rookie year with Oakland was another year of successes, and by 2002, he was easily one of the best pitchers in baseball – period.  However, by 2004, he'd begun to struggle.  There were rumors of his being traded at the end of 2006, but he ultimately left of his own accord and signed with the San Francisco Giants. 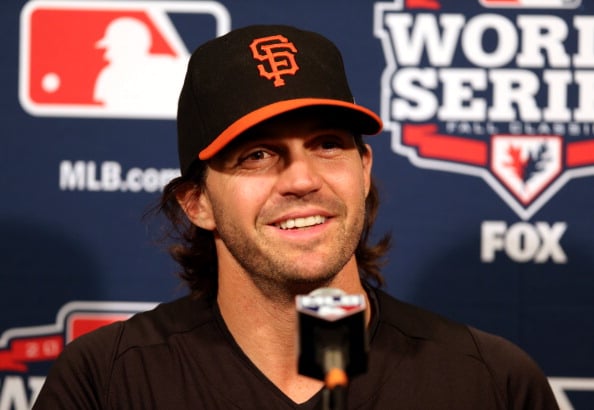 His $126 million contract was, at the time, the most lucrative in MLB history for a pitcher.  He struggled initially, and while there were flashes of the old Barry Zito, he was by no means consistent.  He seemed to revert to form in 2009, but then began to be plagued by injuries.  However, since 2012 and a change in pitching stance, he has begun to pitch as consistently and successfully as he did in the early years of his career.  San Francisco fans are loving it and the Giants' 2012 World Series win was icing on the cake.

Recently, he put his home in Kentfield, California on the market.  The chance to live in Barry Zito's former house will probably make some Giants' fan, very, very happy.

Barry Zito's house in Kentfield sits on two and a quarter acres of gorgeous landscaped grounds.  A small compound, rather than just a house, the property also features a one-bedroom guest house and a three car garage.

The main building of Barry Zito's house features high ceilings, massive windows, hardwood floors, and multiple fireplaces.  The master suite has direct access to the backyard and spa, as well as a large walk-in closet, and a bathroom that rivals the size of most studio apartments.  There is also a formal dining room, a large office, an eat-in kitchen, a bar, a family room, and two more bedrooms, each with their own bathrooms.  Barry Zito's house also features a wine cellar, an outdoor barbecue area, a pool, and a wrap-around sun deck.  The property is currently on the market for $9.775 million.  Here's hoping his lucky streak extends to real estate.