By Brian Warner on September 10, 2021 in Articles › Celebrity Homes

Have you seen that meme where a guy is bent down in front of a small domino that leads to a series of increasingly-larger dominoes? It's used to demonstrate how one little thing can be a slippery slope to something very big and previously inconceivable happening down the road. For example, Logan Paul posting goofy five-second videos on Vine in 2015… leads to Logan Paul bringing Floyd Mayweather out of retirement in 2021 for a Pay Per View boxing match. Or an art school rejecting Adolf Hitler… leads to World War II.

I just took a stab at creating one of these memes to describe a phenomenon in the Los Angeles real estate market: 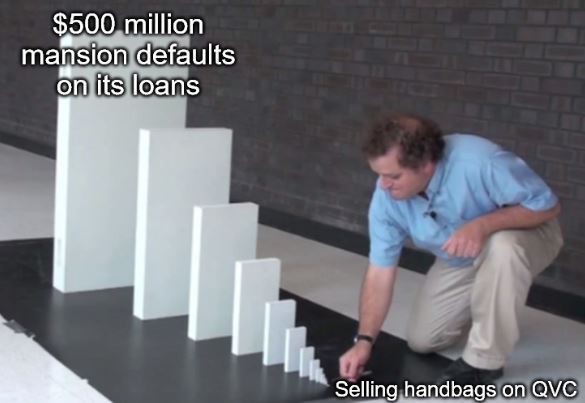 The story you're about to read connects the dots on how a guy selling women's handbags on QVC ultimately led to another guy building a house that he thought would sell for $500 million. It did not sell for $500 million, or any other price. And now the home is in default and entering receivership.

At one point in time, Bruce Makowsky and his wife Kathy Van Zeeland were the undisputed king and queen of selling handbags on QVC. The couple started out in the 1990s selling high-end designer handbags to department stores in New York City. Over time their inventory appeared in more than 1,300 department stores around the world.

Bruce and Kathy really struck pay dirt when they produced a mid-priced line of handbags and shoes for QVC. For years, their products were a fixture on the TV shopping network.

In April 2008, Bruce and Kathy sold their empire to a Hong Kong-based company called Li & Fung for $330 million. The timing could not have been more perfect. Just five months later the global economy collapsed. One could easily argue that their company would have been worth nothing a half year later when the accessory market basically dropped to zero as the world spun of out control.

Flush with hundreds of millions of dollars in cash at a time when real estate market was decimated, Bruce and Kathy embarked on a bit of a property shopping spree. They bought multiple personal homes including one in the exclusive gated community of Beverly Park and and another in Malibu – but they did not stop there.

Bruce founded BAM Luxury Development (I'm pretty sure those are his initials), to serve as his development umbrella company.

Here's the example that changed the world.

In August of 2012, Bruce paid $12.65 million for a property high up in the hills of Beverly Hills. He tore the existing structure down and proceeded to build this 22,300 square-foot mega mansion:

Jay-Z and Beyonce were reportedly extremely interested in the home, touring it several times over the course of a month. Unfortunately for Bey and Jay, they had competitor in the bidding process. A competitor who – just four days after the home was first listed – sold a video game to Microsoft for $2.5 billion. That person's name is Markus Perrson and the game he sold was Minecraft. Perrson swooped in and bought the above mansion for…

That set a record for the area. A record that has since been topped several times. But at that point, this sale was monumental. Let's assume Bruce spent $500 per square foot on construction costs. At 22,300 square feet, one could estimate that Bruce spent around $11.1 million on renovations. So all-in he spent $23.75 million. Call it $24 million to include taxes, landscaping etc. A $24 million investment turned into $46 million gain in two years.

High-end developers of Los Angeles took notice. One of those developers was named…

Nile Niami is one of those characters that can only exist in Los Angeles. He was born in Bel Air but grew up dirt poor in the San Fernando Valley. Nile joined the entertainment industry as a special effects makeup artist in the 1980s. In the early 90s he launched a film production company that eventually produced a handful of B-level, straight-to-VHS action movies. For example, the 1998 Steven Seagal movie, "The Patriot."

Whenever his movies threw off some profits, Nile wisely diversified his growing empire through real estate. At first he bought and flipped cheap houses back in the San Fernando Valley area where he grew up. As his profits got bigger, so did his appetite.

In July 2010, he paid $5 million for a home in West Hollywood above the Sunset Strip. Two years later he sold the home to the Winklvoss twins for $18 million.

Two years later he sold a mansion in Beverly Hills for $38.3 million.

Unfortunately for Nile, Opus languished on the market for years. It couldn't attract buyers even after the price was lowered to $77 million, then $68 million and finally $60 million. In early 2020 Nile's lender took control of the property. The bank ultimately sold the home for $47 million in November 2020.

As it turns out, Nile was dealing with more than one case of snake eyes.

In 2012, the same year he bought what became Opus, Nile paid $28 million for an 8-acre plot of land in Bel Air. Over the next eight years he spent over $100 million constructing a mansion that is somewhat hard to describe. He called it "The One."

"The One" has over 100,000 square-feet of living space, with 20 bedrooms and 30 bathrooms. It features a nightclub, salon, gym, candy room, 50-car garage, 50-seat movie theater, four-lane bowling alley and an Olympic swimming pool. The master bedroom alone is 4,000 square feet.

Nile hoped to sell the home for…

That would have made "The One" the most expensive private home in the world.

Check out this drone tour to understand the magnitude of "The One":

Over the last five years, Nile has borrowed a reported $165 million to complete "The One". Of that $165 million, $115 million came from a billionaire named Don Hankey. Hankey earned his $5.5 billion net worth thanks to the Hankey Group, which is secretly one of the largest subprime car lenders in the country through its subsidiary Westlake Financial Services.

Outside of investor debt, "The One" reportedly also owes around $1 million in unpaid taxes and debts to contractors. The property is not fully completed yet.

"The One" defaulted on its debt for the first time back in March. The news today is that the home has been placed into receivership.

A receivership essentially takes over the asset and decides the best way to get creditors paid back. In the case of "The One," that likely means spending more money to complete the home so it can finally fetch top dollar from a buyer, or trying to sell it as-is to a developer who will take it from here.

Either way, the goal is lofty. The receiver is trying to plug a $165 million hole at a time when maybe the ultra-ultra-ultra high-end real estate market has cooled. At a time when a lot of billionaires are fleeing California for places like Texas and Florida where there's significantly less taxes.

At $165 million, it would be one of the three most-expensive homes ever sold in the United States. An extreme rarity.

If someone paid $165 million for this house they would be on the hook every year for $1.65 million in property taxes. That means you would need to earn $3.2 million ever year pre-tax just to satisfy your California property tax bill. Not once. Every single year!

I also just am not convinced that if I had unlimited money, a $100+ million mansion provides incrementally more value than a home in the same exact neighborhood that costs… $20 million? $30 million?

So in my opinion these creditors have a tough road ahead.

As for Nile Niami, he appears to be hunkering down to weather a storm. In December, Nile placed a spec home he was developing in West Hollywood into bankruptcy. That same month he sold his personal residence for $9.58 million, which was a small gain over what he paid in 2015. In April, he sold two Bel Air homes for a combined $72 million. And in August he sold a home in the Hollywood Hills for $26 million. That was significantly below the $55 million asking price when it was first listed in 2019, but much higher than the $6 million he paid for the property in 2014.

If you had the money, how much would you pay for "The One"?