How would you like to own some undeveloped property in Beverly Hills? A nice little hilltop plot of land featuring 360-degree views from downtown LA, to the beach, to the valley. The property is waiting for you to build a very very large dream home. Located just 10 minutes up the street from world-famous Rodeo drive, it's actually not a little hilltop. It's 157-acres of prime undeveloped 90210 dirt. We're talking about a truly magnificent piece of land that has been the object of royalty and movie stars for decades. Tom Cruise wanted to buy the land. So did Brad Pitt. Both failed. Perhaps it was the asking price, which over the decades has ballooned from $8.5 million to $24 million to $300 million… all the way up to today's most recent price tag: $1 billion. That's not a typo. If you want to own this land, it will cost you $1 billion. And it doesn't even have a house.

If someone does buy this property for $1 billion, it will be BY FAR the most expensive private real estate purchase of all time. The most expensive personal property ever sold in the United States is an 18-acre oceanfront Hamptons compound that sold in 2014 for $137 million. The most expensive personal real estate transaction in the world is believed to be the $300 million spent by the King of Saudi Arabia (who at the time was the Crown Prince) to buy a 57-acre French chateau. Prior to that sale, the record was $221 million that someone spent for a London penthouse. So in other words, if someone had $1 billion to spend on real estate, in theory he or she could buy all of the last 5-6 most expensive properties in the world, instead of this ONE plot of land.

Another thing to think about is the fact that if you spent $1 billion to buy this land, before even building a single structure, your annual California property tax bill will be $10 million. And that's $10 million bucks after taxes, so really you'd have to be someone who has $20 million pre-tax income every year to set aside for the state of California. After you build some structures, the land will be re-assessed and your bill will go up.

For some perspective on the sheer size of this property, keep in mind that Disneyland is 85 acres. If you added neighboring Disney-owned roller coaster park California Adventure, which is 72 acres, you'd be at exactly 157 acres. So in other words, this one undeveloped plot of land in Beverly Hills is exactly the same size as Disneyland + California Adventure.

The history of this property, which today is known as "The Mountain of Beverly Hills", is fascinating. It's formerly known as "The Vineyard" and we've written about it previously in this article about the life and death of Herbalife founder Mark Hughes. Check out this video of the property before we get to the history:

Now that you've visually experienced what we're talking about with this property, let's dive into the history:

Back in the 1977, an Iranian princess named Shams Pahlavi bought the property from movie producer Jack Bean and his wife, actress Mitzi Gaynor. Shams was the older sister of the last shah of Iran. In 1979, the shah was overthrown and basically every wealthy person in Iran fled the country. Iranian students in Los Angeles actually stormed one of Shams' other properties in Beverly Hills and nearly burned it to the ground with Molotov cocktails.

After that incident, Shams had lost interest in owning real estate in Southern California. She retired to a friend's estate in Santa Barbara (where she lived til her death in 1996). She sold her 157-acres of Beverly Hills paradise to Jeopardy creator Merv Griffin in 1987. Merv wanted to build the largest house in LA on the property. He asked around and discovered that the largest house at the time was Aaron Spelling's (mid-construction) nearby Holmby Hills, Spelling Manor. Upon completion, Spelling's house was set to be 56,000 square feet. So Merv made plans to build a 58,000 square foot mansion on his new property. Griffin dubbed his property "The Vineyard".

Here's a nighttime view from when Rihanna held a fundraiser on the property back in 2014: 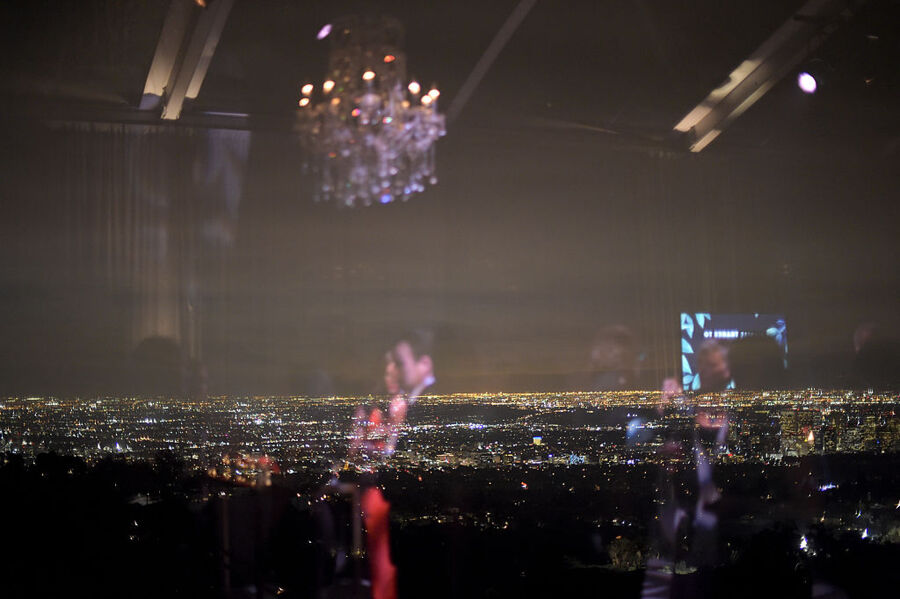 Over the years, Merv struggled to get his plans approved. He also bought the Beverly Hilton hotel and became a little stretched for cash. So, in 1997, Merv sold the property to Herbalife founder Mark Hughes for $8.5 million. Hughes intended to spend $100 million developing his dream home on the land which would include a wildlife sanctuary and a one-million-gallon pond.

This property was one of many owned by Mark Hughes. He was flying high with a net worth of around $300 million that included his 26% stake in Herbalife, a $25 million house in Malibu, a $30 million house in Beverly Hills and an large undeveloped plot of oceanfront land in Malibu.

Tragically, Mark Hughes died in 2000 at the age of 44 from a bad mix of anti-depressants and alcohol. He left his entire estate, valued at some $400 million, to his 8-year-old son, Alex. Alex Hughes wouldn't be able to access or oversee his trust until he turned 35 in the year 2027.

In the meantime, Alex's estate was managed by a group of trustees. In 2004, for reasons that seem batshit crazy in retrospect, the trustees agreed to sell The Vineyard to a man named Charles Dickens who had zero money and zero real estate experience. The agreed upon price was $23.75 million and the buyer was supposed to put $2 million down for the purchase. But since he had no money, he couldn't come up with the $2 million. Somehow, Dickens convinced the trust to LEND him the $2 million to finance the purchase. So a man with no real estate experience or licenses bought the land for no money down. Oh, and according to a court records, the trust accepted this deal while rejecting a higher-dollar more qualified offers that topped $40 million. Total insanity.

When Alex's mother Suzan got wind of the shenanigans happening with her son's trust, she went ballistic. A decade of courtroom battles ensued. Ultimately, Alex successfully removed the trustees and proceeded to vie to reclaim ownership. Significantly, ownership never changed hands. Alex's trust LENT money to a series of developers who promised to find a buyer. Charles Dickens eventually sold his interest in the property to a mysterious Middle Eastern royal family member who pumped $60 million into the land and development plans.

As it stands today, The Mark Hughes Family Trust (and its sole beneficiary, 25-year-old Alex Hughes) remain an equity holder and lender on the recently renamed "Mountain of Beverly Hills". It's unclear how much the trust owns and what kind of rights this Middle Eastern investor has at this point. For example, if the property sells for $1 billion, could the Mark Hughes Trust simply pay the investor $60 million to cover his investments to date and tell him to go screw?

Lawsuits are ongoing. If a buyer comes forward with $1 billion that will go a long way to revealing the identity of the mystery investor and the current ownership structure. A Chinese billionaire has reportedly toured the property several times. The listing agency is planning to spend $1 million marketing the sale. We'll definitely be keeping an eye on this saga!