If you do find yourself living on Meadow Lane at some point, be sure to say hi to your neighbors as you jog down the beach. Neighbors that might include:

This is what Meadow Lane looks like from Bing Maps: 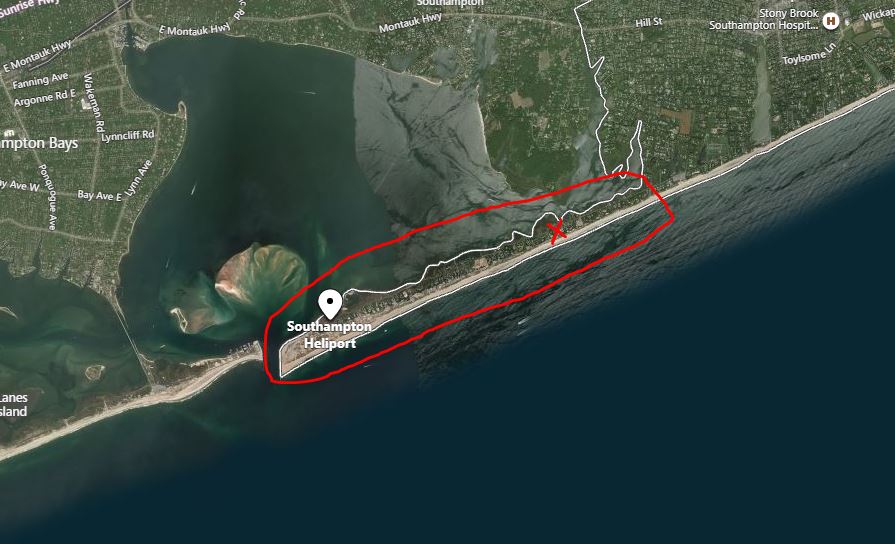 One of the most-attractive aspects of Meadow Lane is the fact that it has basically a private heliport, the Southampton Heliport – which you can see over to the left with a white pin in the screenshot above.

Instead of sitting in traffic or on a train for hours, residents of Meadow Lane be whisked from Manhattan to the Southampton Heliport in approximately 22 minutes.

So if you stopped working at 5pm on a Friday in Manhattan, you could be sitting on the beach enjoying a cocktail by 5:30.

If you have a moment, get inspired with the drone video below of Meadow Lane. You'll see the heliport off to the left at the :37 second mark.

If this lifestyle sounds attractive to you, I have good news!

Earlier this week, an 8-acre estate on Meadow Lane popped on the market. It is one of the largest homes on Meadow Lane and has been in the same family for decades.

This home can be yours for the low-low-price of…

The property, located at 840 Meadow Lane, is marked with an "X" in the Bing Maps screenshot above. Also known as "Ocean Castle", the property spans a little over 8 acres. The 22,000 square-foot main house was built in 1929.

Out of the homes 15 bedrooms, SEVEN are oceanfront (that includes guest house bedrooms).

Perhaps most importantly, the home has "600 feet of pristine white sand frontage" according to its listing.

Here's a video tour of this incredible property:

The sellers of the house are the scions of the wealthy Vance-Carter real estate family. Family matriarch Julia Vance Carter died in 2014. She was survived by three children. Their LLC is selling the property. As we mentioned earlier, the home has apparently been in the family for decades.