At $455 Million, Here's The World's Most Expensive Home

By Chris Kelley on September 12, 2016 in Articles › Celebrity Homes

In France, it is known as Palais Bulles (literally "Bubble Palace"). In the architecture world, it is known as a breakout showcase of futuristic living. At a steep cost of $455 million, it's known as the single most expensive property in the entire world.

Located in Cannes, France, the eccentric Bubble Palace is breaking market records with a price tag that blows the rest out of the water: $455 million. This futuristic abode previously belonged to fashion designer Pierre Cardin and is quite literally designed to look like clusters of bubbles (although it was said to originally be modeled after prehistoric caves), making it not only one the most expensive property in the world, but also perhaps one of the most unique.

***Editor's Note: We received a few comments on Facebook asking how this could be the most expensive home in the world when Mukesh Ambani's home in India is worth $1 billion. To clarify, Mukesh REPORTEDLY spent $1 billion TO BUILD Antilia. That doesn't actually mean it's worth $1 billion. Things are worth what people are willing to pay for them, and until Mukesh puts his home on the market, we can't really know its true value. It's also unlikely that Mukesh would ever get $1 billion for his home because there aren't many people on the planet who would be willing to spend that much on any home, let alone one located in Mumbai. So because this house below in France is currently on the market for $455 million, it is technically the most expensive home in the world. 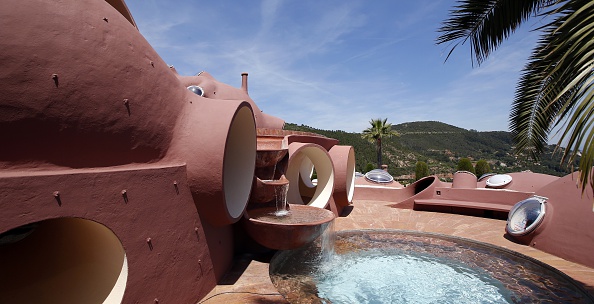 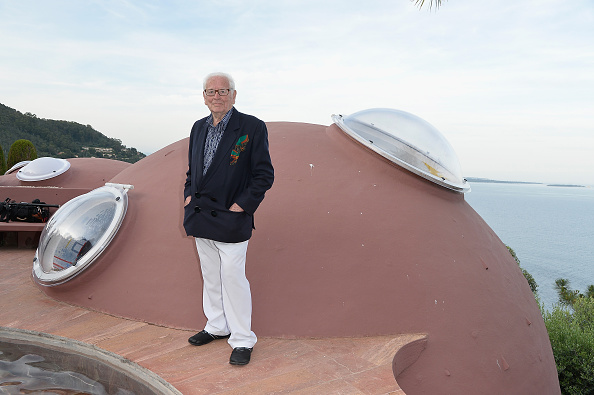 Designed by a Hungarian architect named Antti Lovag, the Bubble Palace was constructed over the course of 14 years, with the entire process taking from 1975 until 1989. While the entire estate has but 10 bedrooms, it's design, size and layout make it look much more like a village than a single home.

With a strong futuristic and space motif running through its design and layout, it is no surprise that each room of the home comes with extremely unique and modern décor. Couches, chairs and other furnishings seem to adapt the home's seemingly saucer-inspired shapes to enhance the space age ambiance, while table toppers and accent pieces mimic the bubble appearance that has made the home famous.

Each of the home's 10 suites comes with its own unique take on futuristic feels and all have been crafted after the vision of a collection of contemporary artists. Situated overlooking the Mediterranean Sea, this room takes full advantage of the seafront view with unique, circular windows throughout its layout. Like every room in the house, this bedroom is devoid of straight lines, instead opting for the bubble motif prevalent throughout the grounds.

The bold designs continue well into the bathrooms of the home. Like several of the Cannes' property's rooms, this particular restroom shares a seafront view through large, dominant windows. Structured and furnished to appear more like a futuristic spa than a 21st century bathroom, counters and baths curve and twist to create a continued circular, oval and bubble-like appearance.

Perhaps just as astonishing as the outside of the home – if not more so – is the 91,000 square feet of private gardens, swimming pools and water ponds just outside. These uniquely designed outdoor lounging areas are grouped as a maze throughout the bubble sculptures that make up the entirety of the home, leading to a surprising – though not out of place – 500-person private amphitheater overlooking the sea.

Despite its unique appeal –  and perhaps because of its extreme price – Cardin's Bubble Palace has remained on the market since 2015. The Italian-born designer, worth $800 million, scored the futuristic palace at an auction in the 1990s, following the death of its French industrialist owner. The Bubble Palace has been the venue for several high-profile French fashion and runway shows, earning fame and notoriety for Cardin's popular after-party celebrations that featured A-list celebrities such as Pierce Brosnan and Marion Cotillard.