With a net worth of $38 billion, Mukesh Ambani is the richest person in India and the 19th richest person in the world. As you might expect, Mukesh lives in a very nice house. OK, that might be the understatement of the century. Mukesh and his family live in what might be the most incredible home ever constructed. It is quite literally the world's most expensive home. The house, which is named Antilia, is located on Mumbai's prestigious Altamount Road. You wont be able to miss it. The 550-foot, 27-story residential skyscraper reportedly cost $1 billion to build from the ground up.

The 400,000 square foot home houses Mukesh, his wife, and their three children. Not much was known about the property during the two years it was under construction (2008 to 2010) or even after the Ambani family moved in. Rumors about the home were fantastical. It was said the house had its own air-traffic control system and three heliports. (The heliport rumor turned out to be true) For more than a year after the house was completed, it stood vacant. It is said that was because of glitches with the Hindu philosophy of Vastu Shastra, which guides directional alignments in architecture – sort of the Hindi Feng Shui. The Ambani family has been very private about their enormous home, sparking more fascination with it. But we've managed to put together the following list of 12 amazing facts about Antilia and the Ambani family in general: 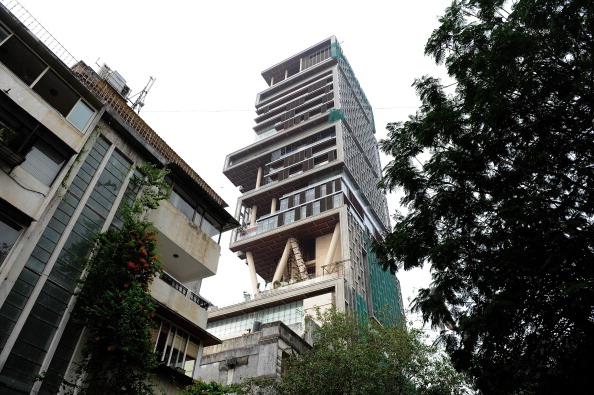 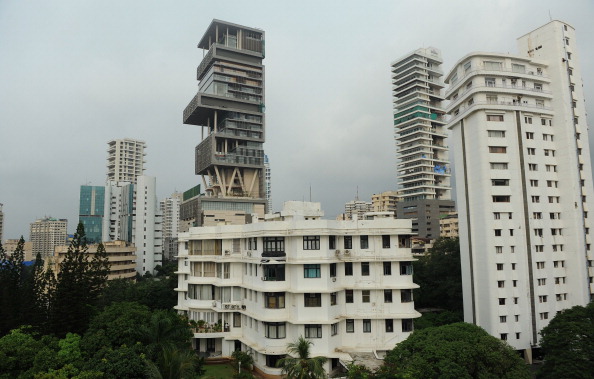 #1. While many of the world's wealthiest families have multiple homes around the world, Antilia is the Ambani family's sole residence. The property is built on a 50,000 square foot plot in the southwest of Mumbai.

#2. The 400,000 square foot residence has 27 floors, but because each floor's ceilings are so high, it's actually as tall as a 60-floor equivalent building. Antilia technically contains more floor space than Versailles. 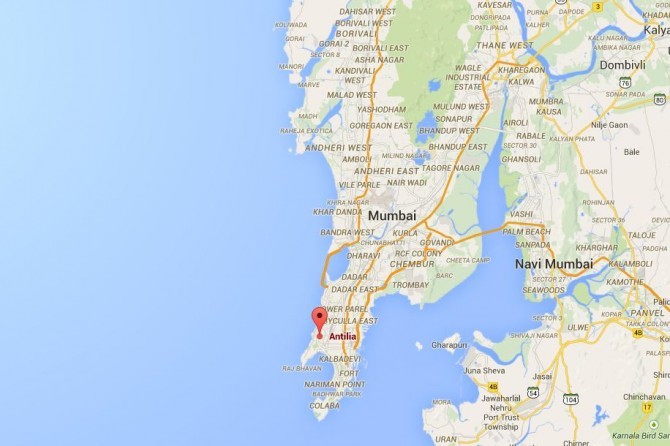 #3. Antilia employs a full time staff of 600 to look after those 400,000 square feet. When the Ambani children are home from college in the United States they still clean their own rooms like average middle class kids.

#4. There have been many reports that Antilia is located in the slums of Mumbai. This is not true. It is located on Altamount Road, one of the world's most expensive addresses. Admittedly though, the slums are not that far away and definitely visible from the home's upper floors.

#5. The lobby of the home has nine elevators and no floor is alike in terms of design. Mukesh's wife Nita ensured that there is no design repetition anywhere in the residence.

#6. As you might expect considering Mukesh's love of cars, Antilia's garage takes up six floors and can fit 168 cars. The seventh floor features a fully-funcitonal motor vehicle service station.

#7. There are terraced gardens, a spa, and a temple where the family prays regularly. This "recreation center" in the home is two-stories tall. The home's exterior hanging gardens absorb sunlight and help keep the building naturally cool.

#8. Antilia is named after a mythical island in the Atlantic Ocean.

#9. The Ambani family's living quarters are located on the top floors so they can take advantage of the sunlight.

#10. The residence incorporates two design motifs: The lotus and the sun are found throughout the home in rare materials like marble, crystal, and mother-of-pearl.

#11. The Ambanis are vegetarians and teetotalers. Wine is only served during rare cocktail hours. Meals are alcohol free and vegetarian regardless of whether their guests are meat eaters or not.

#12. Antilia has a theater that seats 50, a ballroom, a salon, multiple swimming pools, yoga studios, dance studios an entire floor dedicated to ice cream. If you're looking to beat the brutal Mumbai summer temperatures, guests can find relief in the "snow room" – a room that spits out man-made snowflakes 24 hours a day, 7 days a week.