10 of the World's Most Expensive Homes

By Amy Lamare on December 15, 2014 in Articles › Celebrity Homes

Recently, we've taken a look at Bill Gates' insane Washington mansion Xanadu 2.0, and Mukesh Ambani's 27-story, 400,000 square foot skyscraper "Antilia". However, the world is full of very wealthy people with some pretty crazy-priced homes. Consider that the gym in Bill Gates house is bigger than most people's homes and costs more than an entire block of homes in your typical American suburb. That doesn't even come close to the reported $1 billion cost of Ambani's house. And those are just two of the many lavish homes of the world's billionaires. Below we've assembled a handful of some of the most luxurious estates. These are the types of properties where the taxes alone on the land are exponentially more than the median American income. However, we can dream, right?

In the 19th century, Belgium's King Leopold II, reportedly build a bunch of waterside homes for his many mistresses. This 30-acre estate is part of the mistresses "cottages." Villa Leopolda is the second most expensive house in the world. Its owner, Lily Safra, is a Brazilian philanthropist and socialite who acquired her considerable net worth through her four marriages. 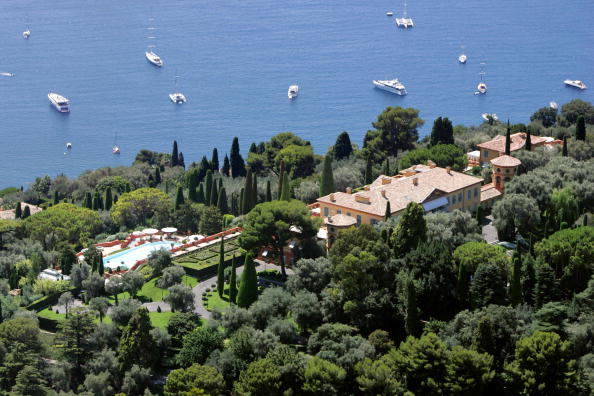 This estate in the Hamptons has 29 bedrooms, 39 bathrooms, and three swimming pools. It also has its own on site power plant. It is owned by investor and businessman Ira Rennert who made his fortune using junk bonds to finance his acquisitions of bankrupt companies.

The world's most expensive apartment was bought by the richest man in the Ukraine. Located in the uber posh Knightsbridge, the apartment is 25,000 square feet and features bulletproof glass. Its owner, Rinat Ahkmetov has been rumored to be involved in organized crime.

The Oracle founder's home is a 23-acre Japanese style estate that he built in 2004. It features 10 buildings, a teahouse, a bathhouse, a man made lake, and a koi pond. Currently, the property alone is assessed at just over $70 million.

Russian oligarch Roman Abramovich owns several enormous estates in London, including this Billionaires Row mansion. His plans for the property include a below ground extension for a tennis court, health center, and auto museum. This is far from Abramovich's only deluxe property. He also owns a chateau on the French Riviera, and in 2009, spent $90 million on a 70-acre estate on St. Bart's.

Ken Griffin is a hedge fund manager who purchased four side-by-side properties right on the ocean in Palm Beach. The eight-acre estate features three homes, the fourth was torn down.

Masayoshi Son is a Japanese businessman who is the founder and CEO of SoftBank, CEO of SoftBank Mobile, and chairman of Sprint. His home is a 9,000 square foot neoclassical house that has a 1,100 square foot pool house, detached library, swimming pool, tennis court, and, of course, formal gardens.

Investment manager titan Ron Baron bought 50+ acres of undeveloped oceanfront land in the Hamptons during the height of the market in 2007. It was is intention to construct a home on the property, however, as of today, the land still sits undeveloped.

Facebook investor Yuri Milner bought this grand estate as a second home. The French chateau inspired house has indoor and outdoor pools, a ballroom, and panoramic views of the San Francisco Bay.