It's no secret that celebrities – true celebrities of the Hollywood/music industry variety – make a lot of money. So much, in fact,  that they can afford some amazing real estate. Ellen DeGeneres, for instance, is well known (alongside her wife Portia de Rossi) for buying, renovating, and selling houses all of the time. But, did you know that despite all those house flippings and moving boxes, Ellen is one of the 10 celebrities who own at least $100 million worth of real estate? It's true! She is in the rarefied group of celebrities that have invested their wealth in real estate and she's in good company. Oprah Winfrey, Barbra Streisand, Paul McCartney, Steven Spielberg, Jack Nicholson, Jay-Z and Beyoncé, Will Smith, Robbie Williams, and even Kanye West all own at least $100 million worth of real estate. Let's take a look at their properties and do a little daydreaming about being able to afford just one of these luxury homes.

Robbie owns an extensive real estate portfolio that includes mansions all over the world, most notably in England and Los Angeles. In 2015, Robbie dropped $32 million for a massive Beverly Hills compound. The house has 25,000 square feet of living space, an 11-car garage, an orchard, and 22 bathrooms. In 2016 he spent $22 million on a London mansion that has 46 bedrooms. In July 2018 he spent $21 million on a Malibu mansion. In early 2017, Robbie sold one of his Beverly Hills homes in the high-end, guard-gated community known a Mulholland Estates for $9.9 million. The 10,681 square-foot mansion was originally listed for $11 million. Rapper DJ Khaled picked it up for 10% off.

Will and Jada bought a $7.5 million, 100-acre property in the hills between Malibu and Calabasas in 1999. Over the next year, they bought several nearby lots to put together 150-acres of contiguous land. On this land there is a 20,000-square-foot Santa Fe style main house, several guest houses, a private lake, a horse riding ring, equestrian trails, stables, tennis courts and much more. In 2013 they quietly listed the property for $42 million but did not find a buyer. Today this property alone is likely worth $50 – $70 million.

In 2015, Will and Jada bought a seven-acre oceanfront compound in Kauai for $10 million. They sold it in 2017 for $12 million. In 2011, the Smiths sold another oceanfront Hawaiian property also on seven-acres for $20 million. The buyer was Ekaterina Rybolovlev, the daughter of billionaire Russian oligarch Dmitry Rybolovlev.

The Smiths also own a 9,000-square-foot home located in a gated community in Hidden Hills, California and a 9,200-square-foot ski chalet in Park City, Utah. 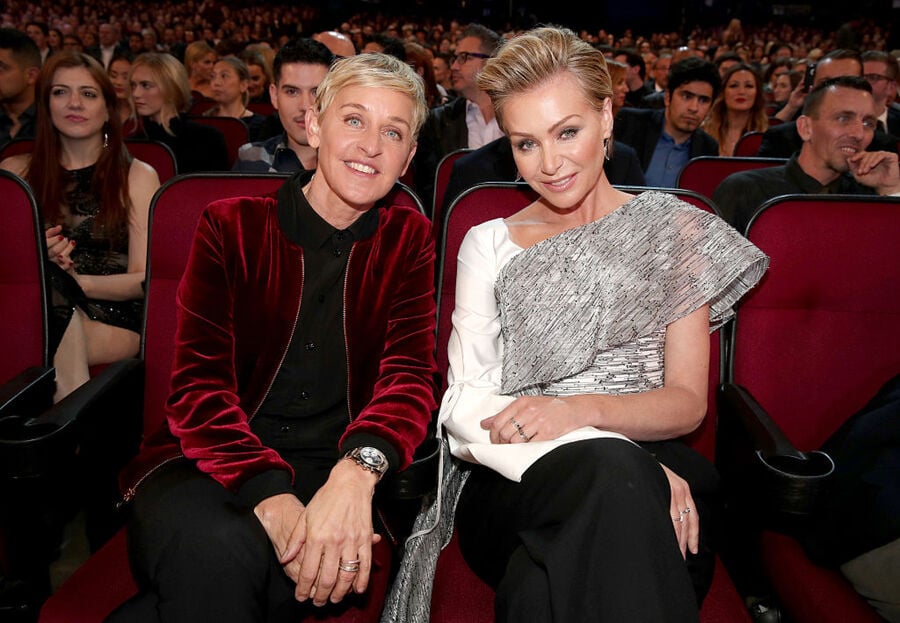 Like I said before, Ellen and Portia are serial house flippers. Since 2003, the couple has bought and sold more than 20 properties. Just in 2019 alone, Ellen and Portia sold three properties for $6.98 million, $15.5 million, and $23 million, respectively. It all started back in 2003 when DeGeneres bought a house in the Hollywood Hills for $6 million. Three years later, she sold the four-bedroom, four and a half bathroom property for $9 million to Will Ferrell. The following year, she bought a mid-century modern style house in the Hollywood Hills nicknamed "the treehouse," due to the 2,000 square feet of outdoor living spaces. She paid $1.271 million for the home. A year later she sold the two-bedroom, two-bathroom property for $2.1 million.

In 2007, DeGeneres and de Rossi bought a $15.75 mansion in Montecito, California. They didn't stay there long. Later that same year, the couple sold it for $20 million. The following year, they bought a 9,200-square-foot home in Beverly Hills for $29 million. They then bought the two surrounding homes to create a compound. DeGeneres and de Rossi got married at this house. By 2012, they had sold the compound to Ryan Seacrest for $37 million. That same year, DeGeneres bought a horse ranch in Thousand Oaks, California, for $8.5 million. After renovating the property, she sold it in 2013 for $10.85 million.

In 2011 they bought Brad Pitt's former home in Malibu for $12 million. They sold it a year later for $13 million. In 2012, the couple shelled out $13.2 million for a pair of adjacent condos in Los Angeles. Three years later, they sold the residences for $11.85 million. In 2014, they paid almost $40 million for a Holmby Hills home called the Brody House and then sold the lavish property for $55 million just six months later to Sean Parker.

In 2018, they bought a mansion in Beverly Hills for $15 million. Less than a year later, they sold the five-bedroom property for $15.5 million. That same year, they paid $6.7 million for a ranch in Santa Barbara. They sold it for $6.98 million to Nickelodeon president Brian Robbins in 2019.

In 2019, the couple bought a five-bedroom, 12-bathroom, newly renovated mansion in Beverly Hills from Adam Levine for $45 million. For what it's worth, Levine is also a bit of a serial house flipper.

Barbra Streisand's real estate holdings in Southern California are worth at least $100 million. Her houses could be worth as much as $200 million, depending on where the local real estate market is. Her famous bluff top Malibu compound alone could be worth $100 million. Located in Malibu's Point Dume neighborhood, Barbra's compound consists of three parcels that she acquired over several transactions starting in the 1990s. The main house is 10,500 square feet and has 8 bedrooms. One house next door is 2,000 square feet, the other is 6,000 square feet. The compound has a total of 47,000 square feet of property, with five structures including a barn. She previously owned a penthouse in Manhattan and a large mansion in Beverly Hills.

Jack Nicholson owns at least a dozen properties in the United States (that we know about through property records). His longtime primary residence is a multi-property compound on Mulholland Drive in Beverly Hills. His compound covers three-acres over at least four properties. He bought the first property in 1969. He added additional parcels in 1993 and 2005. The property he added in 2005 was acquired from the estate of his good friend Marlon Brando. Nicholson bought the estate for $5 million in 2005 and razed the previous home.

Nicholson owns several other houses around Los Angeles including a house in Santa Monica, a condo in Venice, and a 70-acre property in Malibu which he listed for $4.5 million in 2011 but ultimately took off the market.

Outside of Los Angeles Jack owns a house in Shasta County in Northern California, and oceanfront home in Kailua, Hawaii and at least one (perhaps two or three) properties in Aspen, Colorado. He sold a home in Aspen back in 2016 for $11 million, a year after listing it for $15 million.

Paul McCartney's real estate portfolio spans the globe. In 1984, he bought a $1.88 million townhouse overlooking New York City's Museum of Modern Art. In 1998, he spent $495,000 on a house in East Hampton, New York. In 2001, he picked up Courtney Love's Beverly Hills mansion for $4 million. In 2015, he bought a Manhattan penthouse for $15.5 million. Reportedly the monthly maintenance costs for this home are $13,000 a month. McCartney also owns a 190-acre ranch outside of Tucson, Arizona. He owns a half dozen properties (that we know of) in his native United Kingdom, including a 1,500-acre estate in East Sussex, a London flat and a country estate in Scotland.

Beyoncé and Jay-Z own an extremely valuable portfolio of real estate assets around the world. When they are in the United States, The Carters can be found at a luxury apartment in New York City, a mansion in Westchester County, New York or a waterfront Villa in Miami. In 2008 they purchased a seven-bedroom mansion on the ultra-exclusive Indian Creek Island in Miami for $8 million. They sold this home in 2010 for $9.3 million. Beyoncé also owns a $2.6 million home in New Orleans. Jay-Z owns a $10 million apartment in NYC that he bought solo in 2004 for $6.85 million. In 2017 Beyoncé sold her long-time NYC condo for $9.95 million. She bought the condo in 2005 for $5 million. In 2017 Beyoncé and Jay-Z together paid $26 million for a mansion in the Hamptons called Pond House.

In 2017, Beyoncé and Jay-Z together paid $88 million for an insane 30,000-square-foot mansion in Bel Air, California. Public records show that they took out a $52 million mortgage when they bought the house. Using the mortgage rates that were available at the time, Bey and Jay are likely paying north of $250,000 per month on their mortgage for the home that has a full basketball court, 2-acres of land, a 15 car garage, media room, multiple pools and bulletproof windows.

Together, they own a $4 million private island in the Bahamas.

Kanye West owns around $120 million worth of real estate in the U.S. (land, buildings and homes).  Kim and Kanye's primary residence is a large estate in the Los Angeles suburb of Hidden Hills. This estate consists of multiple connected parcels the first of which was acquired in 2014 in two separate transactions for $23 million. The first iteration of their property featured a newly-built mansion on four and a half-acres. They proceeded to spend millions of dollars over several years customizing, re-arranging and expanding the home. In 2019 they expanded their estate by buying neighboring properties in two separate transactions to create a conjoined seven and a half-acre estate. A staggering $28.5 million has been spent on real estate transactions alone to create the Hidden Hills estate. Tens of millions more have been spent on renovations. Their hidden hills estate's current assessed value is north of $70 million.

Kanye and Kim also own a 320-acre estate on Stokes Canyon Road in Calabasas that is worth $16 million. This is where his Sunday Services have been held and where he attempted to build a series of domed structures before being shut down by the L.A. County building commission for permit issues. The also own a $15 million,  6,700-acre ranch called Bighorn Mountain Ranch in Wyoming, a $14 million, 1,400-acre ranch called The Monster Lake Ranch, and a $2 million commercial property in Cody, Wyoming.

Oprah also owns a 43-acre estate on Orcas Island in Washington State that she purchased for $8.275 million in 2018. In 2014 she spent $14 million for a home in Telluride, Colorado.

Oprah bought her first property in Maui in 2002. Over the years she has spent as much as $60 million to piece together 160+ acres in Maui. She spent $32 million in one transaction alone to buy the property next door.

In total, Oprah owns hundreds (potentially over 1000) acres of real estate in the United States with a minimum value of $200 million.

Steven Spielberg and Kate Capshaw own at least $200 million worth of real estate. For many years, they owned a 1.4-acre slice of Malibu's most-coveted beachfront. They bought the first of the parcels that became their final property, back in 1989 for $3.375 million. They expanded their footprint in 2002, purchasing the lot next door for $3.2 million. They sold the property, which has 150 feet of ocean frontage, in 2015 for $26 million.

Their longtime primary residence, which they still own today, is an incredible five-acre multi-home compound in the Pacific Palisades. Not far from their home, they also own an equestrian facility.

On the east coast, they own a 6,000-square-foot New York City apartment that directly overlooks Central Park West. Out in East Hampton, they own a 10-acre estate that is partially oceanfront and partially on a cove. The Spielberg compound encompasses 7.5 acres. The Spielbergs own several other Hamptons properties and a home in Naples, Florida. Steven has also financed several homes for his children around Los Angeles.