By Paula Wilson on June 2, 2013 in Articles › Celebrity Cars

Zach Randolph was a basketball player to watch by the time he was a sophomore in high school.  After leading his team to the state championships, and helping them win their seventh championship, he went on to play with the Michigan State University Spartans.  However, it was quickly obvious that his level of play was NBA-ready, and with an average of 10.8 points and 6.7 rebounds per game over the course of 33 games, he was subsequently drafted after his freshman year.  He began playing for the Portland Trail Blazers in 2001, and played for the team until 2007.  After injuring his hand in March of 2007, he was forced to sit out part of the season.  When he returned, he made 43 points and 17 rebounds during the game, a career high.  He was then almost immediately traded to the New York Knicks.  After one season with the Knicks, he was traded to the Los Angeles Clippers, and then to the Memphis Grizzlies.  With the Grizzlies, he seems to have hit his stride, and as a member of the team, he has twice been named to the NBA All-Star team.  He was also a 2011 All-NBA Third Team selection.  Though their first time in the Western Conference Finals were not so successful for the Grizzlies this year, Mr. Randolph played well.  When he is not out on the court, he can be found driving around in one of his many custom vehicles – all of which are based on 1970s Chevrolet Impalas.

Zach Randolph has four custom Impalas – a 1972 Impala, a 1972 Impala Convertible, a 1973 Impala, and a 1975 Impala.  The Chevrolet Impala went in to production in the late 50s, and had become the car of choice in America by the mid-60s.  Chevrolet continued refining the vehicle through the mid-80s, and it remained the most popular vehicle on the market though those years.  The 1972-1975 models were part of the Impala's fifth generation, and the 1972 iteration ran on a 250 cu in, 4.1 liter Inline Six engine.  The 1973 and 1975 versions upgraded to a 350 cu in, 5.7 liter, Turbo Fire V8 engine.  The Convertible was only offered until 1972.  The 1972 Impala featured an altered grill design, which extended below the bumper, and was the first generation of the Impala to require unleaded gas.  The 1973 Impala featured a larger front bumper, a new taillight design, and better suspension and framing.  The 1975 Impala went for a sleeker design, with a new hood and fenders, and changes to the upholstery, dashboard, and door panels.  Zach Randolph's souped up Impalas feature massive wheels, oversized grilles, and jewel tone paint jobs.  Why he chooses to customize Impalas is a unknown, but the result is pretty cool. 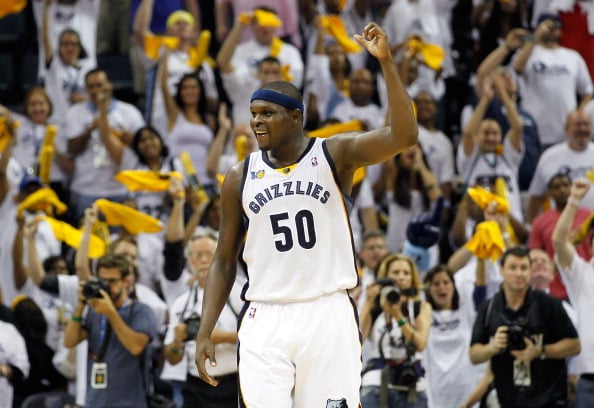 Kevin C. Cox/Getty Images
Did we make a mistake?
Submit a correction suggestion and help us fix it!
Submit a Correction