You Might Put Photos Of Your Kids In Your Cubicle, This Guy Put Up A 1967 Ferrari… For 33 years!

It's hard to stay motivated at work. Anyone can make it through a Thursday or Friday afternoon, it's those early Mondays and Tuesdays that really test your courage. Or worse, those weekends where the boss forced you to come in and finish up the TPS reports. Pure torture. In order to slightly soften that blow, many of us decorate our work spaces with some motivational trinkets. You might put up a photo of your significant other. A photo of your kids. You might even put up a photo of your dream car. The guy you're about to meet had the requisite family photos in his work space. He also had his dream car. Except, he didn't have a photo of his dream car in his office. He had his ACTUAL dream car!!!

Back in 1982, the owner of a light blue 1967 Ferrari 275 GTB/4 decided he was done driving the gorgeous piece of machinery. Prior to this point, he had happily driven the car for more than 10 years. But he suddenly became a bit concerned about keeping both the car and his passengers safe. So what was his solution? He sold the car, right? Probably made a nice little profit, right? Wrong and wrong.

This guy, who recently departed and was named Bob, had a very unusual solution. He decided to drive the car into his office, put it in park, and leave it there. For the next 33 years!

It's actually not that crazy when you think about it. Bob wanted to surround himself with the things he loved. And since he spent most of his life working from his office, that's the best place for family photos, trophies, artwork, collectibles, and super valuable classic cars. In addition to the Ferrari, he also had a Porsche 911 and a Triumph TR3 parked in his office.

When Bob passed away, his family contacted David Gooding from the world famous auction house, Gooding and Company. Gooding is used to taking strange calls about found cars, but found this one particularly intriguing: "I didn't know quite what to make of this. I walked in and didn't want to leave. If I could have pulled up a cot, I would have."

Gooding and Company is putting the Ferrari up for sale at the Amelia Island auction. The 275 GT/4 is expected to bring somewhere between $3.4 and $3.8 million. 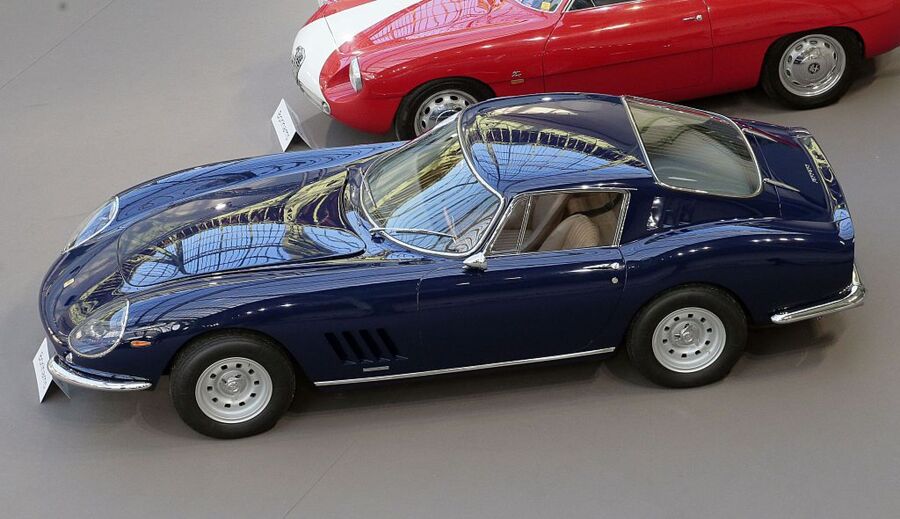 Gooding did some digging and found out that the Ferrari spent its first five years belonging to three different Roman owners. After that, it was imported by an American re-seller of exotic cars who eventually found Bob. Bob was not selfish, and shared the car with his friends and fellow car lovers in eastern Massachusetts. Gooding says even though the car was protected from the elements, it is still far from perfect. The brakes had to be unstuck and the paint had to be touched up. The car did not need what Gooding refers to as "plastic surgery," like many classic cars his company sees.

Gooding understands how Bob only used the car for its aesthetic value: "There are many ways to enjoy a car. Just appreciating its beauty works, too."

Actor and racer Steve McQueen's GTB/4 sold last year for $10 million at auction, so this Ferrari, with its unique history, could also earn an exceptionally high price.

Another car up for auction at the Amelia Island auction is a 1959 Porsche 356 A Coupe. Similar to Bob's story, the owners of the car, which is named "Betsy," parked it in 1971. Joseph Flynn passed away in 1999, and his wife Erika Flynn passed away in 2014, so then the family had to find a new home for the car.

A 1956 Maserati 200 SI is estimated to sell for around $6 million. The racing car has been driven by Stirling Moss among other drivers and has been used in historic races and events for the past decade. Gooding says that Maserati's can be "a really good value" compared to how Ferrari prices "are going through the roof." A 1953 Fiat 8V Couple is looking to sell for between $1 and $2 million. It was one of only 114 made and has been restored in New Zealand, where it was reunited with its original engine.

So, if you had the money (and the space) what car would you park in your office for the next 3 decades?