George Clooney used to drive the Batmobile so you know it must be pretty hard to impress him with a car. Not only that, this guy seems to have it – From an incredible acting career, to a beautiful new bride, and multiple Oscar wins. So what do you get the man who has everything on his birthday??? A new amazing Porsche obviously!

Clooney turns 54 tomorrow, and to celebrate, his new wife Amal got him quite the gift to add to his car collection. Amal splurged and bought George a brand new 2016 Porsche 911 GT3 RS.

The Porsche 911 GT3 RS will replace George's current 911. It will do the same for the luxury car maker. Clooney is a guy who loves cars and likes them to be "stylish and fast," so his new GT3 RS will fit right in. It will feature a 4.0 liter flat-six engine that will be placed in the rear of the vehicle and will have 500 horsepower. It uses Porsche's 7-speed PDK dual-clutch transmission and has a top speed of 193 miles per hour with a 0 to 60 mph time of 3.1 seconds. Clooney should have no problem getting the type of speed he likes in this amazing car. 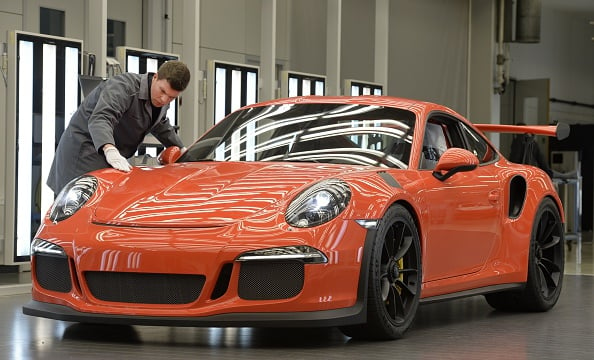 Clooney's new car is expected to be one of the first of this line to make it to the United States. The 2016 Porsche 911 GT3 RS will be on sale in the US in July 2015 with a starting price of around $176,000. Porsche is branding it as a high performance version of their 911 sports car with racing intended to be its primary use.

It is not known whether Amal got the car fully loaded, although that seems like a safe bet. The new 911 features an optional Sport Chrono Package that lets drivers measure and record their performance numbers through the Porsche Track Precision app. If you choose to buy this car with this optional package, you can actually compare your speeds with Clooney's. Although this car seems cheap compared to George's $180 million net worth, it should be his most prized car when all is said and done.