We have attempted to go to the ends of the earth to bring you the latest news surrounding celebrities and their cars. This week, celebrities have won, bought, sold, wrecked, and updated their cars so let's take a closer look.

Tennis star Rafael Nadal won the Stuttgart Open last week and his prize was a tennis yellow Mercedes-AMG GT S.  This luxury car features a biturbo 4.0 liter V8 engine and sells for around $160,000. Nadal remarked that "it's not a Kia, but it's still good" (he has been a Kia sponsor for almost 10 years). Golfer Rickie Fowler also recently came into possession of a Mercedes-AMG GT S.

For Sale by Stallone

Actor Sylvester Stallone's 1968 Corvette is available for purchase. The action star bought the car at the Barrett Jackson Las Vegas auction back in 2009. It features an 8.3 liter Donovan Big Block engine with 660 horsepower. This sports car is available for purchase at Taggart Autosport in Cary, North Carolina for a modest $129,900. The only catch is that it has had one owner since Stallone, but it does include a photo of Sly behind the wheel and his autographed registration.

Back in January, boxer Floyd Mayweather added a beautiful Ferrari Enzo to his rapidly growing luxury car collection. Last week, the car was back in Fusion Luxury Motors' showroom and has been re-listed on their website's inventory list. So what happened Floyd? Could you not afford this $3.8 million luxury sports car after all that money you won in the big "fight?" It turns out he paid $3.2 million and put less than 200 miles on the car. Now he wants to flip it for a $600 thousand profit and use the money to buy two more cars! 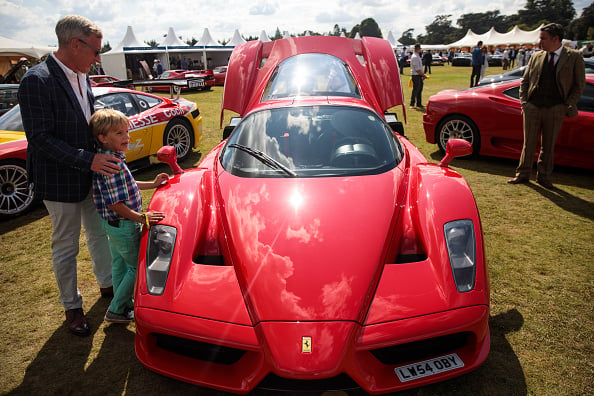 Actor Rowan Atkinson sold his 1997 McLaren F1 for more than $12 million at auction this week after buying it for less than $1 million in 1997 and crashing it twice since then. LINK

Kylie Jenner and Tyga Get Stopped

The happy celebrity couple was pulled over by the cops on their way to Disneyland as Tyga was driving. He was clocked doing 82 in a 65 but was let off with a warning. Tyga did receive tickets for driving without plates and having tinted windows.

The Rock is Relieved

It may sound like the setup to a bad joke, but Dwayne "The Rock" Johnson sideswiped a Jewish folk singer in Massachusetts this week.  The man whose car suffered the damage was happy to meet The Rock, fixed the damages himself and let Johnson off the hook.

Ray J decided to throw a "dog party" and spend $30,000 on it. As he pulled up in his friend's Corvette Stingray, the driver's door was smashed by an SUV and almost fell off.

Singer Chris Brown is constantly changing his Lamborghini Aventador. At first, he had a special red and white camouflage wrap put on the supercar. The next year, Brown transformed the car into a bright blue finish with glossy black accents. His latest update features a matte black finish and is being dubbed "The Dark Knight." Brown's Aventador now includes a rear wing and a set of custom 18 karat gold wheels.

Last but not least, tragedy struck this week as a rapper was killed in a car accident. MC Supreme was a 1990s rapper who had success with his single "Black in America." He had pulled over on the shoulder of the Pacific Coast Highway in Malibu, California when a drunk driver slammed into his car and killed him. This was the same stretch of highway where Caitlyn Jenner was involved in a fatal accident just four months ago.