By Paula Wilson on September 17, 2013 in Articles › Celebrity Cars

Victor Cruz didn't have the kind of super flashy high school football career that many professional footballers sport.  He was exceptional – he made 19 touchdowns his senior year, 15 of them on receptions – but he played for a moderately sized Catholic school in New Jersey.  Consequently, he flew under the radar a bit.  He struggled academically after enrolling at the University of Massachusetts, as the time required for both football and his academic work proved to be a tough combination.  He got his act together by his junior year, however, and went on to be named to the All-Colonial Athletic Association first teem in 2008 and 2009.  After finishing school, he went undrafted.  However, the day after the draft, the New York Giants chose to sign him.  He was the leader in receiving yards at the end of the preseason, and had clocked four touchdown passes.  However, a hamstring pull while at practice before the start of regular season left him on the bench until the next year.  2011 proved to be his breakout year, and he set a franchise record for most receiving yards in a single season.  The New York Giants went on to win the Super Bowl that year, and he was named to the All-Pro Second Team.   Earlier this year, he signed a five-year extension on his contract with the Giants, to the tune of just under $46 million.  Naturally, he took some of that money, and went out to buy himself a nice, new car. 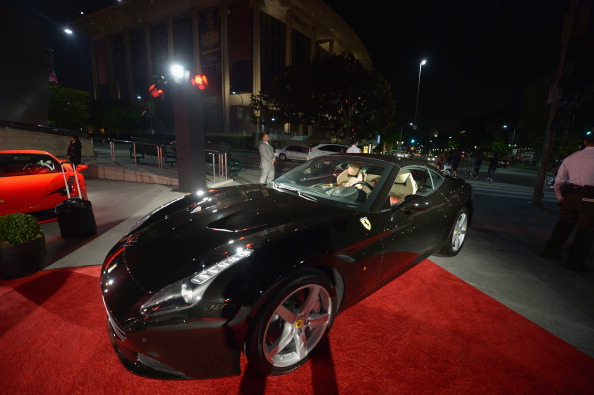 Victor Cruz's car is a black Ferrari California.  The Ferrari California is a grand touring sports car that went into production in 2008.  It runs on a GDI V8 engine that produces 480 hp.  The car's top speed is 193 miles per hour, and it can go 0-60 in 3.8 seconds.  The Ferrari went through thousands of hours of aerodynamic testing, and it was the first Ferrari to come with 7-speed dual clutch transmission, a folding metal roof, multi-link rear suspension, and direct petrol injection.  After the vehicle was recalled in 2012 due to a crankshaft defect that caused the engine to seize, Ferrari released a lighter version of the vehicle with better control.  It currently sells for $200,000, so Victor Cruz should be able to buy a few more.