Usain Bolt's Car: What Do You Give the Fastest Man in the World? A Super Fast Car

By Paula Wilson on October 25, 2012 in Articles › Celebrity Cars

When you are the world's fastest man, not just any car will do.  Usain Bolt likes going fast.  He has said it many times, and even his name seems to speak to his need for speed.  He is the current world record holder in both the 100 and 200 meter races, and has won multiple athletic honors and eleven Gold Medals at the Olympics.  He has also been described as the "world's most marketable athlete", and has earned more than any other track and field athlete in the history of the sport.  In other words, he's a total athletic rockstar.  When you're a rockstar, one of the perks is that you get invited to try out fancy new cars.  Recently, he was invited to drive the brand new 2013 Nissan GT-R at Nissan's testing track in Yokohama.  He enjoyed the car so much, that Nissan designed a custom GT-R for him, complete with gold paint, real gold trim, and his signature.  The car will be auctioned for charity on EBay. 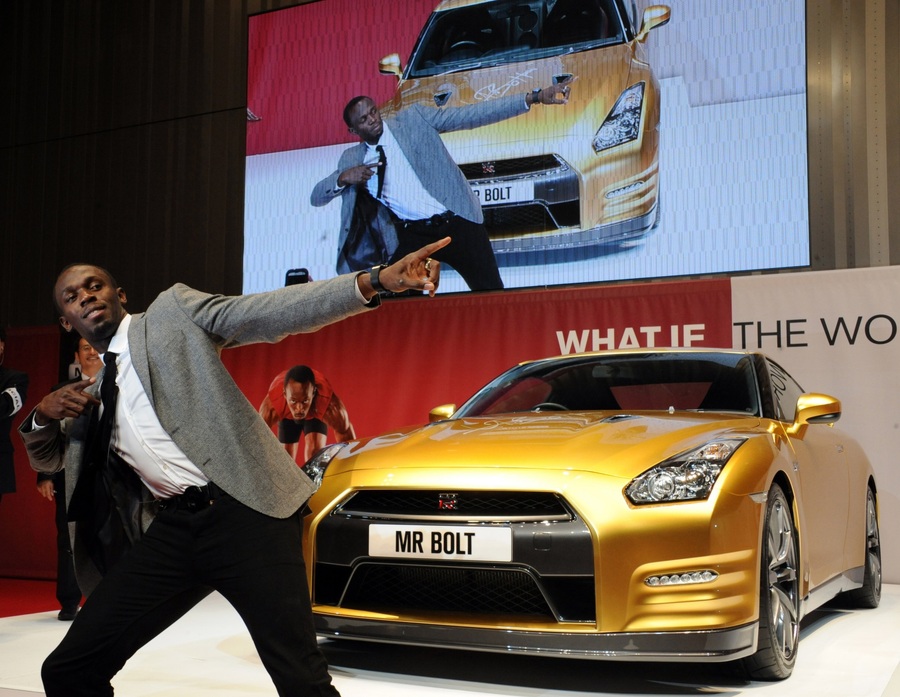 The Nissan GT-R debuted with its current design in 2007, and has been available nearly worldwide since 2009.  The car is notable for incorporating Japanese, European, and American design elements, and features a body that is constructed similar to race cars.  In addition to a multiple-strike coining process to increase the rigidity of the body, the GT-R also comes with high intensity discharge headlights, LED running lights, taillights, and brake lights, power mirrors both inside and outside the car, and UV-reducing solar glass.  The car runs on a 540 horsepower 3.8 liter VR38DETT twin-turbo V6 engine, and can go 0-60 in roughly 2.9 seconds.  It currently costs around $107,000.  However, you may want to be prepared to pony up a bit more than that if you want the car designed for, and signed by, Mr. Bolt.