Tyga's Car: Having a Fast Car is Not the Same as Being Able to Drive It

By Paula Wilson on December 19, 2012 in Articles › Celebrity Cars

It wasn't that long ago that we reported on the coolness that is Tyga's gold Audi R8.  The rapper has a taste for flashy, exotic cars, as do many celebrities, and he recently added a very nice white Lamborghini Aventador to the mix.  The 23-year old, California-born rapper has enjoyed a rapid rise into the upper echelons of the hip hop world.  His popular mixtapes landed him a record deal with Young Money Entertainment in 2007, and one of the first tracks,  a song with Chris Brown, called "Deuces", was nominated for a Grammy Award for "Best Rap/Sung" Collaboration.  Since then, he has released one more moderately successful album, which spawned two Top 40 hits, and three more Top 100 songs.  His third studio album, "Hotel California" is set to drop in the spring of 2013.  When he is not working on studio projects, he continues to produce mixtures, directs adult film productions, such as the recently released, "The XXX Movie", and drives around town in one of his many cars.  Unfortunately, he is not as successful with the latter practice, as he is with the two former.  Tyga, short for "Thank You God Always", recently crashed his Lamborghini Aventador while out for an afternoon drive.  He wasn't hurt, and posted photos to Instagram soon after the accident.  However, the car was definitely not going to be going anywhere soon. 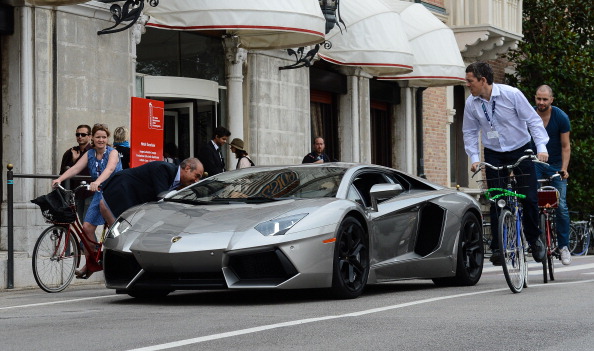 The Lamborghini rolled out the Aventador in mid-2011, and almost immediately sold a year's worth of the vehicles.  Both the 2-door coupe, and the 2-door roaster, run on a 6.5 liter L539 V12 engine.  The vehicle can go from 0-60 in 2.9 seconds, and tops out at 217 miles per hour.  It has an electronically controlled all-wheel drive system, and has been universally lauded by car critics, and the public, as the most "consumer-friendly" of Lamborghini's many gorgeous vehicles.  (Even with a $387,000 price tag.)  The seven-speed transmission is single clutch, and shifting gears takes a mere 50 seconds.  With that kind of power and gear shift capability, the car screams to be driven at top speeds.  However, as Tyga clearly found it, you should probably also know how to handle the car at normal speeds, before you attempt to set a new land record.