Top Five Most Expensive Cars Ever Sold At Auction

Earlier this summer, we brought you the stories of some of the amazing cars that sold at the annual Monterey Car Week auction. The highest amount a car sold for this year at the auction was $17.6 million, for a 1964 Ferrari 250 coupe. Last year, a 1962 Ferrari 250 GTO sold for a record breaking $38 million at Classic Car Week, which makes it the second most expensive car to ever be sold at auction. Here is a closer look at the top five most expensive cars sold at auction. (In case you are wondering, this year's 1964 Ferrari 250 coupe would rank #6, at $17.6 million.)

In case you are wondering, the NART here means North American Racing Team. This particular Spyder is rare; it was one of only 10 examples made. It was only owned once, by Eddie Smith. Smith had offers for his car by the likes of Ralph Lauren and Steve McQueen, but held onto it until 2013, when it was purchased at auction by Lawrence Stroll, who had a large role in forming the Tommy Hilfiger company.

This "Silver Arrow" won a groundbreaking 12 Grand Prix races and was one of only 14 examples made by Mercedes, with only 10 of them remaining today. Six of those 10 are owned by the carmaker in Germany and three of them are located in museums, which makes this the only one left. The car was driven by famous racer, Juan Manuel Fangio in Le Mans. The Silver Arrow was sold by Bonham's in 2013.

This Ferrari set the record in Monterey in 2014. This model was produced from 1962 to 1964, with only 39 examples having been made. Ralph Lauren also happens to own one of these bad boys and so does Pink Floyd drummer, Nick Mason. This particular model was designed to compete at the 3-liter FIA GT World Championship series in 1962, but was fatally crashed by a driver in another race beforehand. This 250 coupe was sold at the Concours d'Elegance luxury car festival.

Ferrari finishes up the list with three out of the five most expensive cars ever sold at auction. This model has been called the most expensive car in the world and someone has claimed to pay $52 million to buy one in a private sale, although there is no proof of the transaction. This example was sold through RM Auctions and is one of only 36 to ever be produced. This 250 GTO was actually purchased by Chris Evans, the new host of Top Gear. In order to afford this car, he had to sell off three of his other rare Ferraris. 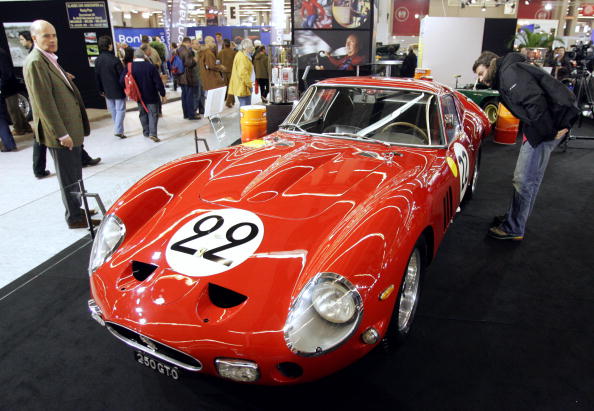 This classic model was only made between 1936 and 1940 and was designed by the son of Bugatti founder, Ettore Bugatti. There were just over 700 Bugatti Type 57Cs made, but only four of those were Type 57SCs, and only two of those remain intact today. One of those is a 1938 model owned by fashion icon, Ralph Lauren, and the other is this car that was previously owned by Dr. Peter Williamson. This record breaking sale was conducted by Gooding & Company.