The Ten Most Expensive Rolls-Royce Models

There is no question that Rolls-Royce is one of the top luxury car brands of the past century. The luxury car maker is easily identified by its Spirit of Ecstasy hood ornament and started when two young men were brought together in the early 1900s. Henry Royce developed his first car, the two-cylinder Royce 10, which became a favorite of the owner of the C.S. Rolls & Co. dealership, Charles Rolls. The pair officially became business partners in 1906 and built a new factory in Manchester. They went on to acquire Bentley after the Great Depression and the rest is history.

Rolls-Royce engines are top of the line and are often used in Formula One race cars, yachts, and even jets. Celebrities like Tom Brady, Shaquille O'Neal, Simon Cowell, Lady Gaga, Queen Latifah, Jennifer Lopez, Beyoncé, and David Beckham have all owned Rolls-Royces which are certainly not cheap. Here is a look at the Top 10 Most Expensive Rolls-Royce Models. 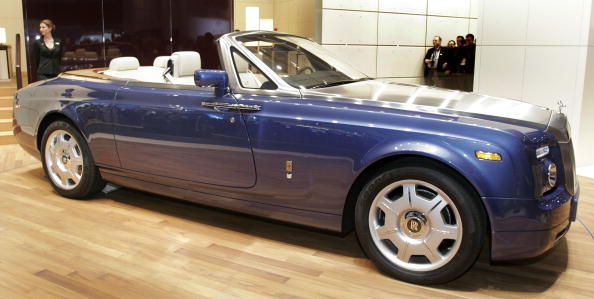 Having a Hearse variation of the Phantom seems appropriate when you consider the name of the car and the fact that Rolls also makes a model called the Ghost. This may very well by the most expensive funeral car in the world. It was introduced in 2012 and has the same 6.75 liter V12 engine as the original Phantom.

This is a 2-door version based on the Phantom Coupe and the original Phantom. One of these cars went for $1.6 million at auction for Elton John's AIDS Foundation. The engine has 453 horsepower and the Drophead Coupe was introduced in 2007.

German tuner Mansory updated the Phantom and added some modern touches including aluminum side skirt flanks, grille stripes, and LED daytime running lights. This all black Rolls has a 7.5 liter engine for added performance.

This variation is based on the Rolls-Royce Ghost which is a luxury saloon that started production in 2010. The Ghost was named in honor of the Silver Ghost which was first made in 1906. The Rolls-Royce Ghost is known as a "more measured, more realistic car" than the Phantom. It features a 6.6 liter twin-turbo V12 engine. The Rolls-Royce Ghost has a top speed of 155 miles per hour and can go from 0 to 60 mph in 4.7 seconds. The Fenice Milano features 24-carat gold trim as well as gold door handles, rear view mirror, seat panels, and control panels.

This custom built one-off was made by Pininfarina and modeled after the Drophead Coupe. The Hyperion (named for a Greek Titan child of the earth and the sky) features wooden doors and carbon fiber inspired by automobiles of the 1930s.

This was the first car produced by Rolls and Royce back in 1904 and originally sold for $664. In 2007 this one of a kind classic sold for $8.3 million at a London auction.

As you can tell, the Phantom is all over this list. This solid gold Rolls has 120 kilograms of 18-carat gold on parts such as the side trims, front grill, wheels, boot handle, and on-board protection system. This armored car is even certified by the Government Beschussamt Munchen as being securely protected. The Rolls-Royce Phantom Sold Gold may just be the most luxurious car in the world.