Sinbad's Car: An SUV So Tough, It Survives Bankruptcy

By Paula Wilson on November 19, 2012 in Articles › Celebrity Cars

Sinbad first gained national attention when he beat fellow comic, Dennis Miller, on "Star Search" in the mid-80s.  The exposure he gained from "Star Search" led to a role on "The Redd Fox Show", as well as guest starring roles on such shows as "The Cosby Show" and "Keep on Cruisin'".  In 1987, he was cast in the role that would bring him widespread fame, as Coach Walter Oakes on "A Different World".  From there, he went on to star in multiple films including, "Necessary Roughness", "Coneheads", "Meteor Man", "Houseguest", and "Jingle All the Way".  He also guest starred on such television shows as, "Roc", "Cosby", "Ready to Run", "Moesha", "Resurrection Blvd." and "Slacker Cats".  He also starred in his own sitcom, entitled, "The Sinbad Show" for one season.  He has appeared in multiple successful stand-up comedy specials for HBO, among other channels, and he's released multiple comedy DVDs.  However, since declaring bankruptcy in 2010, and putting his California mansion on the market, he has largely disappeared from the public eye.  Just recently he has begun to re-emerge, appearing on a late night comedy show on Comedy Central and driving around town in his Lincoln Navigator. 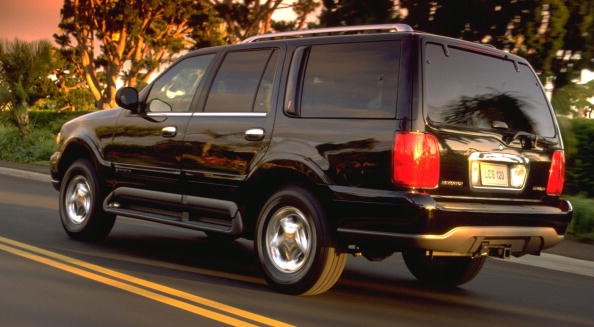 Sinbad's car is a black Lincoln Navigator.  The Lincoln Navigator is a four-door SUV that Ford Motor Company began producing in 1997.  Part of their luxury, Lincoln line, the car runs on a 5.4 liter Triton SOHC V8 engine.  The vehicle is built on a Ford T1 platform, and features a front grille that is reminiscent of the classic Lincoln Continental from the 60s.  The vehicle also has integrated foglights, and chrome accents on the grille, sides, and door moulding.  The car comes with heated and cooled front seats, third row seats that can be power-folded, a THX-certified audio system, a rearview camera, and a newly redesigned independent rear suspension system which has improved handling over earlier models.  The car currently sells for $58,000+, so Sinbad clearly isn't doing too terribly in the financial department.