Shauna Sand's Car: Does the Car a Star Make?

By Paula Wilson on February 6, 2013 in Articles › Celebrity Cars

Shauna Sand was originally focused on a career as a classical dancer.  She began her dance training when she was five, attended a performing arts magnet school through much of her elementary and middle school years, and began receiving dance scholarships to study with major companies when she was in her early teens. However, she also started modeling when she was in elementary school, and signed with her first major modeling agency when she was fifteen.  Dance ended up taking a backseat.  She subsequently moved to Paris, but it was not to further her career.  Instead, she took some time away from modeling and completed her B.A. in International Business Administration at The American University of Paris.  After returning to the United States, she caught the attention of Hugh Hefner, and, in May 1996, she became the Playboy "Playmate of the Month".  Her modeling work led to roles in various film and television projects, including "Renegade", "The Chosen One: Legend of the Raven", "Air America", "Dark Realm", "Charmed, "Las Vegas", and "Hollywood Girls".  Recently, she appeared in the headlines due to her short marriage, and messy divorce, from Laurent Homburger.  When not pursuing acting and modeling work, she can be seen driving around in her Bentley Continental. 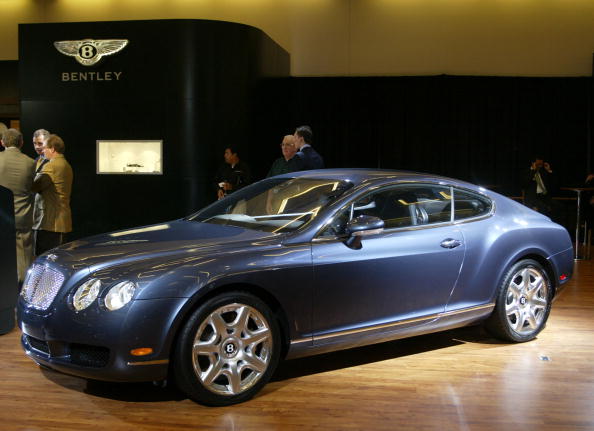 The Bentley Continental went into production in 2003, and is a two-door 2+2 fastback.  It runs on a 6 liter twin-turbocharged W12 engine, can go from 0-60 in 4.8 seconds, and tops out at 197.6 miles per hour.  The current generation has 8-speed tiptronic automatic transmission, on-demand steering assistance, eco-tires, and Torsen permanent four-wheel drive.  The vehicle currently sells for approximately $200,000.  The car has become the chosen mode of transport among many Hollywood stars, and it is not uncommon to see major celebrities driving the Continental all over Southern California.  It says something about Ms. Sand's continued popularity, that she is able to tool around town in one.