By Paula Wilson on September 22, 2013 in Articles › Celebrity Cars

Selma Blair has had a rather peripatetic career that has seen her playing misfits, love interests, comic foils, and everything in between.  She made her professional debut with commercial work in the early 90s, and then scored her first television gig with a guest starring role on "The Adventures of Pete & Pete".  She made the leap to feature film in 1996, and spent the next few years appearing in smaller films and guest starring on a variety of television shows.  Her performance in "Cruel Intentions" in 1999 made her a household name, and since then, she has appeared in a number of high profile projects.  She is most widely recognized for her work in such films as "Legally Blonde", "The Sweetest Thing", "Hellboy", "Hellboy 2: The Golden Army", and "The Fog".  She also starred in the short-lived series, "Zoe, Duncan, Jack, and Jane" in the late 90s, and another short-lived series called "Kath & Jim" in 2008.  While most of her film roles have been rather dramatic, her television work has been primarily comedic.  In 2012, she was cast in a role that caused some raised eyebrows.  She signed on to appear opposite Charlie Sheen in his series, "Anger Management".  During the show's second season, she became more vocal about the difficulties of working with the notoriously volatile actor, and her contract was abruptly terminated.  She was replaced the same day.  She was reportedly threatening to sue both Charlie Sheen and Lionsgate Entertainment for her abrupt dismissal, but everyone's lawyers are now working towards a settlement.   Now that she has a bit more free time on her hands, she has been seen driving around town in her Mercedes-Benz ML350. 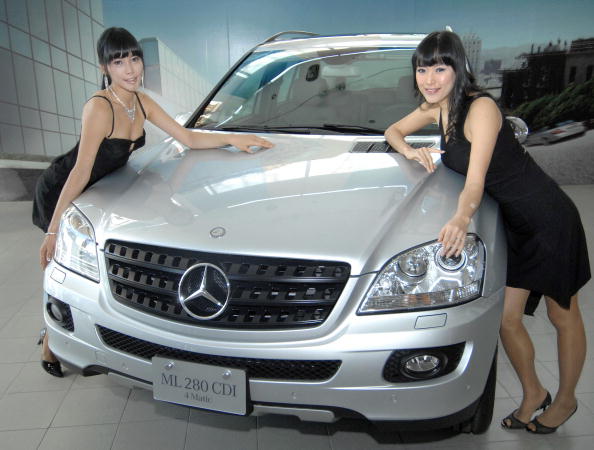 The Mercedes-Benze ML350 is a four-door mid-size crossover SUV that went into production in 2011.  The M class series was first launched in 1997, and the ML350 is the 3rd generation of the vehicle.  It features an improved 7G-Tronic Plus seven-speed automatic transmission system, and runs on a 3.5 liter V6 engine.  It's built on a W166 chassis, and has more legroom in the back than previous versions.  Depending on which options you choose, the vehicle costs anywhere from $45,000 and $92,000.  With Selma Blair's current state of employment, here's hoping she purchased one of the lower-priced models.