Selena Gomez's Car: She Hasn't Let Fame Go to Her Head… or Her Garage

By Paula Wilson on January 16, 2013 in Articles › Celebrity Cars

Selena Gomez has managed to remain relatively drama-free in comparison to some of her Disney starlet counterparts.  Unlike Lindsay Lohan, Amanda Bynes, Britney Spears, and Demi Lovato, Ms. Gomez has seemed to handle fame, a busy schedule, a high-profile romance with Justin Bieber, and all-things Disney, with a surprising amount of equanimity.  The 20-year-old singer/actor/dancer began acting professionally at age 7 on "Barney & Friends", and then began working for the Disney Channel in a recurring role on Seasons 2 and 3 of "Hannah Montana".  In 2007, she was cast as one of the leads on the popular series, "Wizards of Waverly Place".  From there, she went on to appear in such films as, "Another Cinderella Story", "Princess Protection Program", and "Ramona and Beezus".  She also launched a successful music career, and has released three studio albums as part of Selena Gomez & The Scene.  All three albums have achieved Gold status.  When she is not recording, performing, shooting a project, or rehearsing, she is also a UNICEF Goodwill Ambassador.  Long story short, she actually seems to have a head on her shoulders, and is managing to take her career in stride.  Regularly described as "down-to-earth", this particular quality is very much reflected in her choice of vehicle. 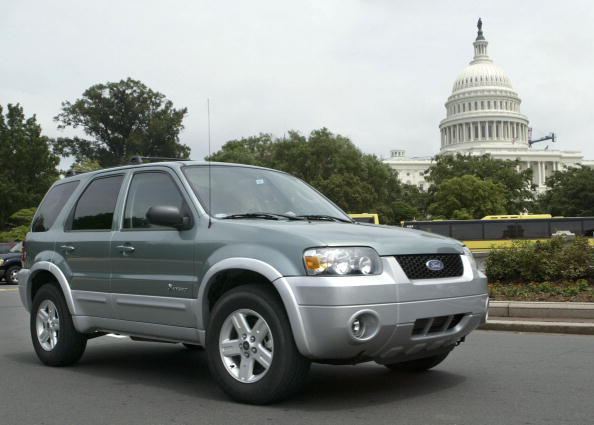 Selena Gomez's car is a silver Ford Escape.  Yes, you read that correctly.  She drives a normal, suburban, Ford Escape.  The Ford Escape went into production in 2000, and is a 5-door compact SUV.  The third generation of the Escape was launched in April of 2012, and is built on the platform of the Ford Kuga.  The third generation Ford Escape can come with a 1.6 liter or 2.0 liter Ecoboost I4 engine, or a 2.5 liter Duratec I4 engine.  The Ecoboost engine is so effective that Ford discontinued their Ford Escape hybrid vehicle, since the fuel economy with the Ecoboost engine was higher than what was achieved with the hybrid Escape.  The Escape comes with MyFord Touch, a touch-screen system that controls the vehicle based on the Microsoft platform.  It also has a hands-free lift-gate, seats and carpeting made from eco-friendly materials, and comes with front wheel or all-wheel drive.  Depending on the number of optional add-ons a Ford Escape owner chooses, the car can cost anywhere from $22,928 to $31,849.  Ms. Gomez probably has dresses that are worth more than her car, but she is clearly not letting any of her success go to her head.