Previously, we brought you the story of how Rowan Atkinson (or Mr. Bean if you prefer) was selling his prized 1997 McLaren F1 luxury supercar. The English actor became super rich thanks mostly to his best known character, Mr. Bean. With a net worth of $130 million, he had no trouble buying a purple McLaren F1 back in 1997 for just under $1 million. This car became one of the crown jewels in Atkinson's awesome collection.

Earlier this year, Atkinson hoped to sell this luxury vehicle for about $15 million at auction. While the famed actor did not make quite as much as he had hoped for, he sold the McLaren F1 for about $12.3 million. Although the car was not intended to be an investment, Atkinson ended up making more than $11 million over the 18 years he owned and drove the car (he put 41,000 miles on it). Purchased by a British buyer, the sale ended up being one of the biggest car deals ever done in the UK. I am guessing that the buyer happened to be a fan of Mr. Bean, and that drove up the price.

Atkinson's F1 is one of only 64 ever made. It features a 6.1 liter V12 engine with 627 horsepower. The supercar has a top speed of 240 miles per hour and can go from 0 to 60 mph in 3.2 seconds, which makes it the world's fastest non-turbocharged production car. The F1 is a three seater, with the driver's seat in the middle so the new owner can have a supermodel on both sides of him.

One thing that makes this car unique is the fact that Rowan has crashed the car twice. Once in 1999, and again in 2011. In 2011 Rowan wrapped the car around a tree on the side of a highway while driving on a slippery road near an English town called Peterborough. Rowan walked away with a broken shoulder. The car was damaged so badly that the 6.1 liter engine was found 60 feet away from the crash site.

To repair the damage, Rowan had to fork over $1.4 million to McLaren Special Operations. It took four weeks just to compile an estimate of the damage. McLaren then spent another full year completing the repairs. On the upside, after patiently waiting for a year, Rowan did end up receiving a $1.4 million insurance claim (Britain's highest ever single car insurance payout). On the downside, Rowan's annual insurance premium for this car alone was increased to $100,000 per year. That's $8300 a month just to drive/own this one car. 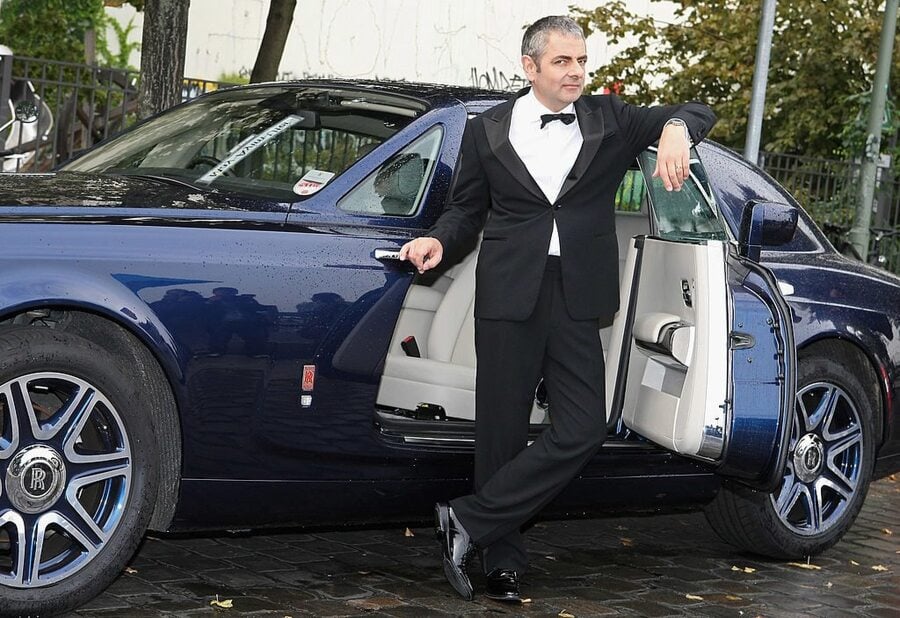 Atkinson's car collection would impress fellow car-loving comedians Jay Leno and Jerry Seinfeld and also features a Honda NSX, Jaguar Mk7, Aston Martin DB2, vintage Ford Falcon, 1939 BMW 328, and Rolls-Royce Phantom Coupe. Not only does he have a super collection of luxury cars, but he also knows how to drive them. Atkinson recorded the 2nd fastest time ever documented on the track at Top Gear in his F1.

Do you think the previous owner of a car should make a difference in how much it sells for? What would this car have sold for if the average Joe owned it and not Mr. Bean?