Rowan Atkinson (AKA Mr. Bean) Just Listed His 1997 McLaren F1 For A Crazy Amount Of Money

By Brian Warner on January 27, 2015 in Articles › Celebrity Cars

I can say with confidence that in my entire life, not once have I seen a Mr. Bean movie. I also haven't seen any Mr. Bean TV shows, assuming there ever were any–I honestly have no idea. Maybe I'm too old, or maybe Mr. Bean's bumbling brand of British comedy just isn't my cup of tea. On the other hand, I bet I would have a surprisingly awesome time hanging out with the man behind the character, Rowan Atkinson. Contrary to his bumbling alter-ego, Rowan seems like a bit of a badass. Not only is he extremely rich, he's also one of the most admired luxury car collectors in the world. His collection includes dozens of supercars from the modern and classic eras. And if you'd like to own one of Mr. Bean's cars, you should know he just put his 1997 McLaren F1 up for auction. But a heads up, you're gonna need very deep pockets.

Rowan Atkinson has become surprisingly RICH thanks to Mr. Bean. At his peak, Rowan was consistently one of the highest-paid actors in the world. As the owner and creator of the Mr. Bean character, he was able to negotiate extremely generous back-end deals for each of his movies. The 1997 movie "Bean" earned $200 million. The 2003 movie "Johnny English" earned $160 million. 2007's "Mr. Bean's Holiday" earned $230 million. 2011's "Johnny English Reborn" took home $160 million. To date, the movies in which he has been featured as the lead actor have earned $1.6 billion via the worldwide box office. If you include movies where he was a supporting actor or the member of an ensemble cast, his cumulative worldwide box office take is over $2.6 billion.

Thanks to this enormous success, Rowan Atkinson has managed to accumulate two very impressive things: #1) A net worth of $130 million. And #2) A car collection that would impress fellow car-loving comedians Jay Leno and Jerry Seinfeld. 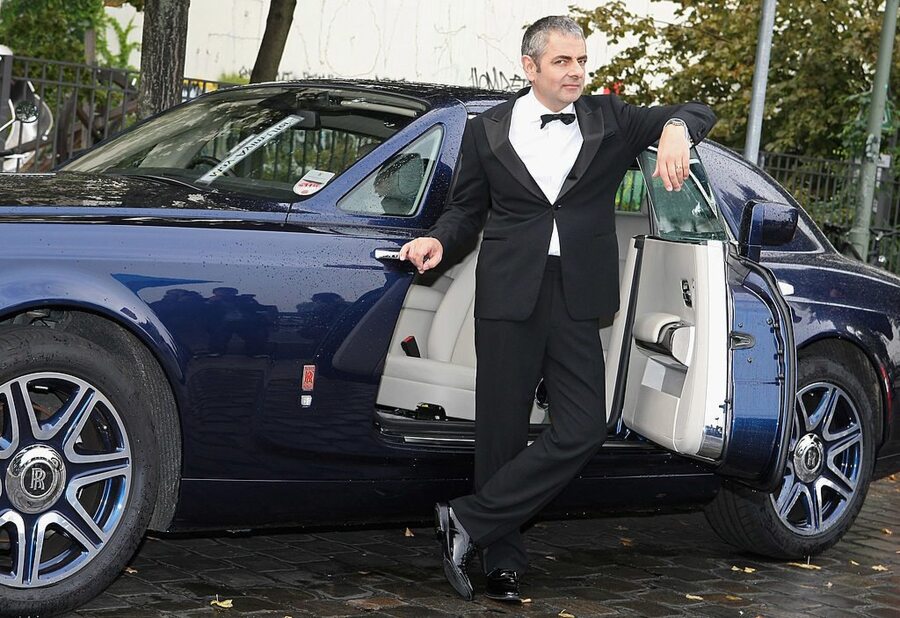 As we mentioned previously, one of Rowan's cars is a purple 1997 McLaren F1. He bought it brand new from the factory back in 1997 for a little below $1 million. McLaren only made 64 of this particular model which can go from 0-60 in 3.2 seconds and has a top speed of 240 MPH.

Unfortunately, over the last 15 years, Rowan has crashed the car twice. Once in 1999, and again in 2011. The 1999 crash didn't do too much damage, he basically rear-ended a Range Rover. The 2011 accident was a different story. Rowan wrapped the car around a tree on the side of a highway while driving on a slippery road near an English town called Peterborough. Rowan walked away with a broken shoulder. The car was damaged so badly that the 6.1 liter engine was found 60 feet away from the crash site.

To repair the damage, Rowan had to fork over $1.4 million to McLaren Special Operations. It took four weeks just to compile an estimate of the damage. McLaren then spent another full year completing the repairs. On the upside, after patiently waiting for a year, Rowan did end up receiving a $1.4 million insurance claim. On the downside, Rowan's annual insurance premium for this car alone was increased to $100,000 per year. That's $8300 a month just to drive/own this one car.

Over the last 15 years, McLaren F1s have become extremely valuable collector's items. Only 106 were originally produced between 1992 and 1998. It's unknown how many are left on the road today. Rowan's model has 41,000 miles on it.

Thanks to his car's relatively low mileage, Rowan's F1 is expected to fetch $15 million in an auction that launched this week. Not a bad little payday! So why is he selling? Rowan told reporters:

"I bought the car for the quality of thinking that went into its design. Now that it has become a thing of value it is time for it to be enjoyed by someone else."