By Paula Wilson on October 4, 2012 in Articles › Celebrity Cars

Rosie Huntington-Whiteley began modeling when she was sixteen.  The 5'9″ model had unconventional looks that often placed her at the receiving end of unkind comments from her classmates.  However, it was those interesting features that ultimately led to work for Levi's and Abercrombie & Fitch.  In 2006, she began modeling for Victoria's Secret, and by 2008, she had "arrived" officially, modeling for Burberry and appearing on the cover of British Vogue.  Since then, she has served as the face of multiple high-profile campaigns, walked the runway for a host of famous designers, and has appeared on the covers of multiple magazines.  She became known to a wider audience, after she was cast as Megan Fox's replacement in "Transformers: Dark of the Moon".  While her performance was almost universally panned by film critics, the modeling world took no notice.  She has continued to work steadily, and was recently name Elle Magazine's Top Style Icon.  When she is not working for Prada, Victoria's Secret, or Burberry, Ms. Huntington-Whiteley can be seen driving around town in her decidedly un-supermodel-like Audi S5 convertible. 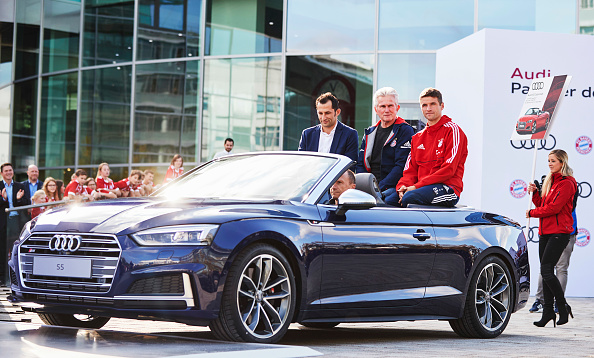 The Audi S5 debuted in 2009.  It went on sale in 2010, and currently costs around $80,000.  The car comes with Audi's famous quattro four-wheel drive system, along with a number of other "bells and whistles", such as LED running lights, bi-Xenon headlamps, alloy wheels, and heated leather seats.  The engine is a 4.2 liter Fuel Stratified Injection V8 engine, and puts out 349 hp.  The car weighs 4,310 pounds, and is an all-around comfortable and reliable vehicle.  In other words, Rosie Huntington-Whiteley's car, is everything the life of a model is not.