By Paula Wilson on August 1, 2013 in Articles › Celebrity Cars

Younger audiences remember Robert Stack as the serious-looking man who hosted "Unsolved Mysteries" from the late 80s into the early 2000s.  However, for many people, he was synonymous with the "tough guy detective" persona that has been copied repeatedly on more recent shows like "NYPD Blue", "Burn Notice", the "CSI" franchise, "Blue Bloods", "The Shield", "Criminal Minds", "Law & Order", and the list goes on.  He got his start in movies in the late 1930s, and appeared opposite some of the biggest female stars of the time, including Deanna Durbin and Carol Lombard.  He began to gain widespread notice with his performance in "The High and the Mighty" in 1954, and then earned an Oscar nomination for his work in "Written on the Wind" in 1957.  However, it was his performance as Eliot Ness in the original, "The Untouchables", television series that cemented his star status.  He starred on the show until it ended its run in 1963, and won an Emmy for Best Actor in 1960.  From there, he went on to appear in a string of similar roles on such shows as "The Name of the Game', "Most Wanted", and "Strike Force".  It was hard to see him as anything other than the tough no-nonsense detective type, and later in his career, he often parodied this character in both film and television projects.  However, based on his car, the no-nonsense tough man must not have been far from his real personality.  One of his vehicles went up for auction today by Auctions America – a gorgeous 1960 Mercedes-Benz 300SL Roadster. 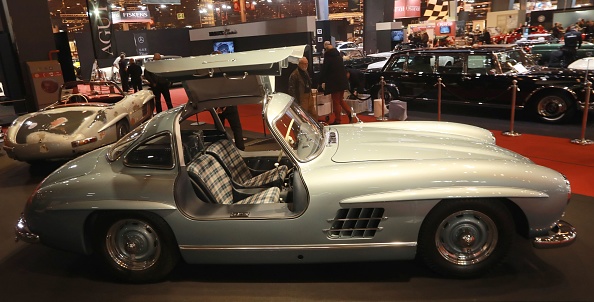 The Mercedes-Benz 300SL Roadsterwas the fastest production car of its time when it was first released in 1954.  It was produced from 1957-1963.  The vehicle runs on a front-mounted 6-cylinder-inline engine that produces 222 hp.  It has a 4-speed manual transmission and is primarily made up of sheet steel and aluminum on a steel tube space frame.  The car is very aerodynamic and has very good handling, especially in comparison to other cars of the time.  It has a top speed of 260 km/h (160 mph).  Though its horsepower is not as high as that of comparable cars made by Ferrari or Porsche in the late 50s and early 60s, the 300SL Roadster is considerably lighter and has far less drag.  Consequently, it did quite well in endurance races.  Robert Stack's vehicle was a gift for winning his Emmy, and it is in pristine condition.  It even has the original leather interior and hardtop.  In the past, 60s era 300SLs have fetched almost $500,000.  There's a good chance that the excellent condition of this particular 300SL Roadster, combined with the reputation of its former owner, will result in a much higher final price.